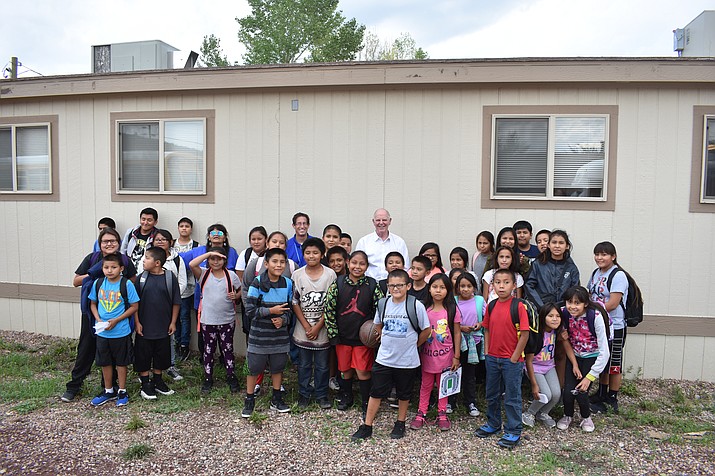 FLAGSTAFF, Ariz. — Calling the federal government’s shutdown pathetic and harmful to Americans, U.S. Rep. Tom O’Halleran said that he is for protecting the borders, but believes building the wall is not the most practical way to do that and questions why the Trump administration has not produced a plan on how the $5 billion would be spent building the wall.

Rep. O’Halleran, who represents an area in Congress that includes the Navajo Nation and Hopi Tribe, said there is not a member of the House of Representatives who doesn’t want to secure the border, but added this has to be discussed in an environment that is not politically toxic.

“I have not been a fan of the wall,” he said. “It’s going to take more than a wall. The wall can slow it down, but we need more manpower and drones because people can get over, under or around the wall.”

O’Halleran said the law needs to be enforced, but the Trump administration has cut back on manpower and technology on the border. He said a road needs to be built on the American side of the border, so the border patrol can move around easier.

O’Halleran said those bringing drugs in are well aware that there are 400 miles of border.

“We want to protect our citizens, but we need to take into consideration the long-term impacts of our decisions,” he said.

O’Halleran said while serving in the state legislature, he voted often for securing the border.

“If you’re illegal and commit a crime, you need to go and you should never be given citizenship,” he said. “I would love for the administration to come to Congress, say this is what we want to do, this is how we want to do it. Rather than just saying we want $5 billion without a plan. I have not seen one analysis on how the money is going to be spent and who’s going to [oversee] it. If they have a plan, they should let people know it.”

O’Halleran said a lot of land owners on the border are against the wall because they have land on both sides. He would like to see the land owners have radio frequencies so they could easily talk with each other.

O’Halleran said there is enough blame to go around on the government shutdown. He said the Republican-dominated Senate unanimously passed a budget that Trump agreed to sign and then backed out at the last minute because of the immigration issues. O’Halleran also blames Congress taking more than six weeks off since September when they could have been working on solving the immigration and budget issues.

O’Halleran said the problems caused by the government shutdown include:

*federal agencies have contracts with outside companies that cannot be fulfilled;

*U.S. Forest Service workers are not on the job and some national parks have been shut down, causing economic impacts on tribes and communities that depend on income from tourism;

“This is not healthy. It doesn’t look good for our country. It’s one of the most frustrating things I have ever been involved in,” he said. “There is not a shortage of issues, but a critical need to indicate implications of our actions (or inactions). It only costs us more if we do not address problems in an appropriate way.”

O’Halleran said his three major achievements during the last Congress included maintaining Medicaid and Medicare funding, obtaining $100 million in funding for schools on reservations and increasing funding for veterans.

O’Halleran said some Republicans in Congress wanted to cut funding for Medicaid and Medicare, but they were able to maintain the funding.

“This is critical for Native American elderly,” he said.

O’Halleran said most tribes need Medicaid, but he said this is also an issue for many Americans. He said Verde Valley has one of the highest number of people in the state on Medicaid per capita. He said the Affordable Care Act (ACA), also known as Obamacare, is important to preserve, although Republicans eliminated the subsidies that were allowed in the past by the ACA.

O’Halleran said some of the $100 million in funds for schools went to seven schools on the Navajo Nation for construction of newer facilities.

“We are working hard to get more funds because there are at least 50 schools on Navajo that need funding,” he said.

O’Halleran said the increased funding for veterans is to repair or build veterans hospitals.

“We are trying to change the way health care goes for veterans. I don’t get why a veteran from Navajo has to travel 200 to 300 miles to get health care when they are sick,” he said.

O’Halleran said Republicans in Congress tried the past year to cut funding across the board including an attempt to cut $300 million from the Bureau of Indian Affairs (BIA).

“To me, that is unbelievable. We battled back to not only preserve the funding, but get more funding into it,” he said.

O’Halleran said the members of Congress who want to cut funds need to come to the reservations.

“We need to get them out here, so these are not just numbers to them. These are real people; whether it’s dealing with uranium, health care or veterans. All of these issues need to be resolved. This has gone on for decades and there is no reason for this,” he said. “American people are American people. You cannot have one part of the country that gets health care and another part that does not. Can you imagine if there was a uranium spill in Central Park in New York? It’s five or six decades later and we still need 500 sites cleaned up. There was an attempt to stop funding and transfer it to the BLM (Bureau of Land Management). We were able to stop that and keep it going. We need to get people out here and show them what promises were broken.”

O’Halleran said last year most of his time was spent trying to keep funding the programs that were already in place, but this year, he will be trying to get better funding for programs by educating members of Congress about health care and veterans issues.

“We need Congress to understand why these issues continue to linger,” he said.

One of the main areas O’Halleran will address this year is incentives for economic development on reservations including Navajo, Hopi, Salt River and White Mountain Apache. He said the 50-85 percent unemployment rate on reservations is unacceptable. He is also working with the tribes on water settlement issues. O’Halleran said improving education and computer broadband services to the reservations is important to supplying a good work force to make the reservations more enticing to companies.

O’Halleran said he voted for Nancy Pelosi as House speaker because she is going to change the direction of the House of Representatives. Specifically, she wants the House of Representatives to be more transparent and also not allow a small contingent of Congress to decide the outcome of an issue. O’Halleran said there will be different rules for committees so that bills will be heard.

“The system will be open to hearings in committee and everybody will have the right to bring forward solutions, both Republicans and Democrats,” he said. “When I chaired a committee in the state legislature, everybody had the right to be heard. In the past, only the party in charge was heard and that left a lot of people out.”

O’Halleran said he likes being in the Democratic majority because they see the rules differently,

O’Halleran hopes to get on the Energy and Commerce Committee because this is an important position for economic development. The committee assignments will be made next week.