The Window Rock Fighting Scout boys held off the Holbrook Roadrunners by a score of 56 to 45 and the Lady Scouts were 56 to 39 winners over the Lady Roadrunners. 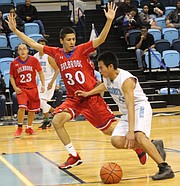 Meeting this year for the second time, the Holbrook Roadrunners were winners by a score of 52 to 43 at home over the Window Rock Fighting Scouts during the first game of 2018-2019 season.

“We got to keep up with them, they have good shooters and we need to keep them out of the paint,” said Head Coach Joel Harper, in a pregame interview. “We have to out rebound them and outhustle them.”

While Delmar Johnson coach of the visiting Holbrook Roadrunners (6-8), commented, “I told them, during warm ups, to play with more effort and energy, make some lay ups.”

Scout Sophomore Cauy Silversmith wasn’t in the starting lineup, but coach Harper gave him a chance and he scored as soon as he checked in, intercepting a pass then driving the full length of the court, for a layup in route to 7 to 2 start for the Scouts.

The Scouts continued to play full court pressure defense, outscoring the Roadrunners 6 to 1 to take a 10- point lead, at the end of the first quarter.

The host Scouts, battle for an 8-5 run and traded baskets with the Roadrunners throughout the second period, coasting to a 31 to 17 half time advantage.

“Keep up the energy level from the first half,” Harper told his team at the start of the half.

“You can’t spot a team 14 points in the first half,” Johnson said to the Roadrunners as they were staring the second half. “Now, you gotta work harder in the second half.”

The Roadrunners went on a mission; Josiah Freddie gave them a lift they needed, contributing 10 points during a 13 to 3 run, cutting the lead to four points, but still trailed, 34 to 30.

“We may have come out over confident at the start of the second half,” Harper said, talking about the turn of events. “We regained our composer, we didn’t lose our focus, we settled down and continued to play our game. They came out ready to play in the second half.”

The Scouts refocused, with scoring from Trevor Herbert and Burk Williams, and glided to six point lead as the third quarter ended 38 to 32 in the Scouts favor.

The final quarter, saw the Fighting Scouts spreading the floor, moving the ball and not slacking off on defense, calmly keep their cool, finishing the game with an 11 point win, 56 to 45.

“We kept our focus in the second half and finish the game,” Harper said. “Holbrook is a well-coached team, they gave us a challenge and we are happy with the win.”

Cauy Silversmith had a game high 20 points, followed by Herbert with 10 points for the Fighting Scouts.

“We weren’t ready to play at the beginning of the game, we came back, got ready for the second half,” Holbrook coach Johnson said during the post-game interview.

Tynen Nelson and Freddie scored 13 points each for the Holbrook Roadrunners.

Earlier in the season, Holbrook Lady Roadrunners came away with a 59 to 41 win over the Window Rock Lady Fighting Scouts at the Tony Munoz Gym in Holbrook.

“We plan to slow it down offensively this time and work the ball inside,” said coach Sharon Toadecheenie. “We will crash the boards and run our defense.”

“Play defense,” said Holbrook Lady Roadrunners head coach Greg Perkins. “Don’t score from the outside until you score in the paint.”

The Roadrunners went inside for the first play of the game; Matehya Aberle was fouled and she hit both free throws for a 2-0 lead.

On their second possession, Holbrook called on Megan Cummings to score from the outside; she connected on a three pointer, from beyond the arc and the Lady Roadrunners continue to lead 5 to 3.

The game was tied at 5 and 7 all, then Tristen Ambrose was fouled going for a layup. She made both free throws, giving the Roadrunners a 11 to 10 lead at the end of the first quarter,

The Lady Scouts and Lady Roadrunners traded baskets during the second quarter. The Scouts out scored the Roadrunners, 18 to 12 and led going into intermission 28 to 23.

Jana Solee led the Scouts with six points in the third quarter. The Scouts scored a total of 10 points while three different Roadrunners could only combine for six points and trailed by a score of 38 to 29 going into the final frame.

A five to two run at the start of the fourth quarter by the Lady Scouts increased the cushion to 43 to 31.

The Roadrunners, led by Madison Chappell, put together a 6-0 run, cutting into the lead but still trailed, 43 to 37, mid-way into the final quarter.

James scored nine of her game-high 21 points in the final minutes of the quarter, sealing the win for the Window Rock Lady fighting Scouts, 56 to 39.

“We knew Holbrook is a good team,” Toadecheenie said. “This game will prepare us for the second half of our season.”

“We came out flat, we missed a lot of shots we normally make,” Perkins said. “didn’t shoot well at all, we only made one of 25 three pointers. They are a tough team. Anybody that beats Winslow by 19 points is a team to be reckoned with during the state playoffs. We have to get some confidence and get ready for the second half of our season.”