Waiting for Congress: Trump tweets 'poor me' as pitch to end shutdown 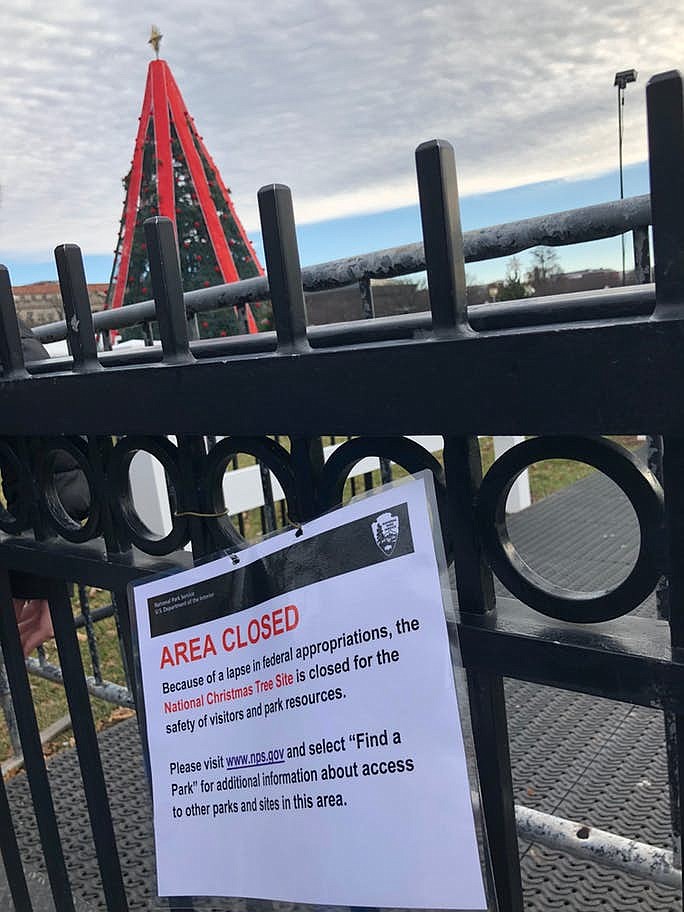 A sign on the National Christmas Tree read closed. The Interior Department's National Park Service does not have staff available during the government shutdown. (Photo/Mark Trahant)

WASHINGTON — President Donald J. Trump says the government shutdown will continue until Democrats give in and fund a border wall. Democrats say that won’t happen and that the administration has not spent all of the money that has already appropriated for border security.

Over the holiday the president told reporters that he wanted the border wall constructed or renovated by election day. “I can’t tell you when the government is going to be open. I can tell you it’s not going to be open until we have a wall, a fence, whatever they would like to call it,” he said. Trump also tweeted: “I am all alone (poor me) in the White House waiting for the Democrats to come back and make a deal on desperately needed Border Security. At some point the Democrats not wanting to make a deal will cost our Country more money than the Border Wall we are all talking about. Crazy!”

President Trump said federal workers have told him they support the shutdown and he should “stay out” until he gets the wall.

However Democrats in the House had a different take on the shutdown. Soon to be Speaker of the House Nancy Pelosi said when her party takes office next week “we will be passing legislation to open up government.”

Meanwhile hundreds of thousands of federal workers are on the hook. If the paycheck lasts beyond two weeks, the Office of Management and Budget, reports that federal workers will not be able to receive their next paychecks covering the Dec. 23-Jan. 5 pay period. Most employees -- some 400,000 -- are required to report for work anyway and they will get back pay after the shutdown ends. Another 345,000 employees are furloughed and Congress will have to pass legislation before those employees can get paid.

The Capitol is seen from the Russell Senate Office Building in Washington, Thursday, Dec. 27, 2018, during a partial government shutdown. (AP Photo/J. Scott Applewhite)

The Interior Department has not yet addressed its process for contract funding and operations for tribes, but the Assistant Secretary for Indian Affairs is preparing a contingency plan. That document says 3,395 employees will be “excepted” and required to work while another 2,455 will be furloughed.

Tribes and other federal contractors that work with the agencies under the “limited” shutdown will not get paid until after a spending bill becomes law. Contractors do not get paid for their employees’ time during the shutdown or the cost of re-configuring their operations to accommodate the government.

A letter to tribal leaders from the Indian Health Service said the agency “has determined tribally-managed programs ... are “excepted programs” in which functions must continue under the following criteria defined by OMB: addresses emergency circumstances, such that the suspension of the function would imminently threaten the safety of human life or the protection of property. “This designation means that the IHS may incur the obligation to enter into the agreement, but the agency cannot pay tribes or tribal organizations contracting,” the letter said, “until appropriations are enacted. Therefore, there will be no funding available from the IHS until such time as appropriations are enacted and available for such purpose. We acknowledge that this circumstance may result in insufficient funds to carry out the terms of the agreement and that the program may cease to operate.”

Another example of the pressure that this shutdown will place on the cash flow of tribes comes from the Commodity Supplemental Food Program, WIC, and the Food Distribution Program on Indian Reservations. These Department of Agriculture programs can continue to operate with local funding. The old foodstamps program, now called the Supplemental Nutrition Assistance Program, or SNAP, will continue through January. But that’s only for existing participants because there won’t be a federal contact to sort through any problems that might surface.

The Agriculture Department said: “For the first week of a potential shutdown, 61 percent of employees would either be exempted or excepted from shutdown activities. If the shutdown continues, this percentage would decrease, and activities would be reduced as available funding decreases.”

Some 95 percent of the nearly 8,000 people who work for the Department of Housing and Urban Development are being furloughed. That means any pending loans for houses will not be processed until workers return.

One agency that is not impacted yet is the Environmental Protection Agency. That agency has left over money from the last appropriation cycle. Federal courts are also operating on year-end funds and that funding could be stretched to last a couple of weeks.

​The government shutdown is not supposed to impact the military. But that’s only true for the uniformed branches of the Department of Defense. The Coast Guard and the uniformed officers of National Oceanic & Atmospheric Administration are impacted because both branches are in the Commerce Department’s appropriations bill.

And the National Weather Service says it will continue to provide critical forecast, watch and warning information to protect life and property throughout the shutdown.

One agency that is impacted by the shutdown: U.S. Border Patrol. All of its law enforcement functions are “excepted” and therefore will continue. But the next paycheck will be on hold until there is a new spending bill. That’s 54,000 agents and officers. It’s the same for the Transportation Security Administration where 53,000 employees are on the clock without pay for now.

The Senate is set to convene Dec. 27. There are no plans to convene the House before the new Congress takes office on Jan. 3, 2019, but that could change if Senate Democrats and the White House make a deal.