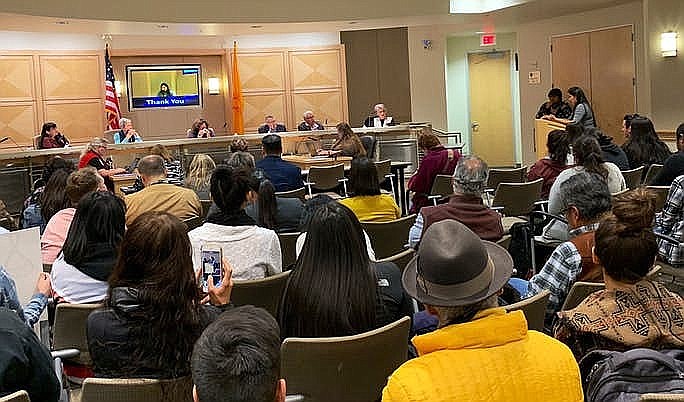 Parents, community members and students spoke at the school district’s equity and inclusion meeting to express their concern over the incident. (Photo/Indian Country Today)

WINDOW ROCK, Ariz. — In mid-December, the Health, Education, and Human Services Committee considered Legislation No. 0390-18, which calls for an investigation by the Navajo Nation Human Rights Commission to investigate the occurrence of discriminatory behavior against Navajo and Native American students in school systems on and near the Navajo Nation.

The legislation states that over time there have been a significant number of incidents involving the mistreatment of Navajo and Native American students by representatives of school systems.

The goal of the investigation is to develop an effective legal and administrative response by each branch of the Nation who would utilize the information from the public hearings to take action on what is in the best interest of the Navajo Nation.

HEHSC member and legislation sponsor Council Delegate Olin Kieyoomia (Coyote Canyon, Mexican Springs, Naschitti, Tohatchi, Bahastl’a’a’) said the legislation was drafted in response to a recent incident that occurred at Cibola High School in Albuquerque, New Mexico in which a Navajo student’s braid was cut off by a teacher, who also called another student a “bloody Indian.”

“This discriminatory behavior is remnant of the days when children were sent to boarding schools, and children were forced to cut their hair and were called derogatory names. And now today, they are trying to silence our identity, so as Navajo leadership, we need to shed light on this for our children and protect them,” Kieyoomia said.

He added that the bill also serves as a way to ‘get the word out there to other schools’ who have Navajo children in their classrooms and ‘to be careful and be aware that the Navajo Nation will protect its children.’

HEHSC member Council Delegate Nathaniel Brown (Chilchinbeto, Dennehotso, Kayenta) expressed support for the legislation and said the Navajo Nation, as well as other Native American tribes, have always had issues with schools and discrimination cases. He commended the youth for speaking out against the discriminatory incidences.

“We teach our Navajo young people to use their words to stand on their own, and that comes from our elders. Elders have always told us, ‘listen to us because one day you are going to have to speak up for yourself and speak for your people.’ I applaud our Navajo youth who are practicing this traditional way and they’re defending it,” he said.

He added that schools need to do better when responding to discriminatory incidences, and that administration and faculty need to be mindful of Navajo and other Native American cultures that are present within their facilities. He said many of the locations of schools were constructed on ancestral lands of indigenous people, and “that space should be honored and remembered.”

HEHSC members voted 3-0 to approve Legislation No. 0390-18, which moves forward to the Naabik’íyáti’ Committee which serves as the final authority on the bill.

Information provided by the Office of the Speaker