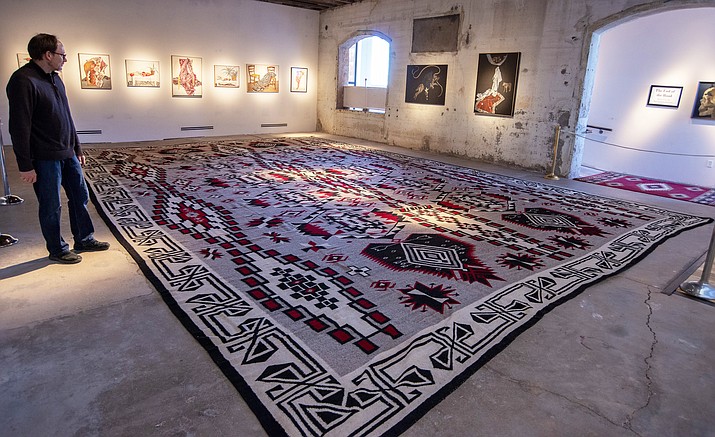 The rug was up for sale a few years ago and the hotel owners were selected as the buyers most likely to provide the best care for the rarest of Navajo rugs.

The rug is 26 feet by 36 feet in size and the condition is mint condition with vibrant colors, weaving and surface perfect.

Dan Lutzik, La Posada general manager had Mary Walker, an assistant in at WAT (Winslow Arts Trust) analyze the rug and help to prepare a plan for permanent display.

The rug may be available for viewing at future dates and times, as the final display circumstances allow. More information about viewing the rug is available by calling La Posada at (928) 289 4366 to determine if rug viewing is open when you expect to be in Winslow.

Some history from seven years ago

May 1, 2012 was an auspicious day for Native Americans and Winslow, Arizona. The Winslow Arts Trust at La Posada Hotel acquired the rug Lorenzo Hubbell Jr. commissioned in 1932.

Back then, the rug was displayed at La Posada at its initial public showing — the first in 50 years and a very long time since being displayed Winslow.

The rug, valued in 2012 at $1 million, was scheduled to be on permanent display at the historic train depot, which was soon to be converted to the Route 66 Gallery at La Posada, beginning in the spring of 2013.

Hubbell, while in business in Winslow, Arizona, decided to make the "World's Largest Navajo Rug" as a tribute to Native American weavers and as a Southwest craft item, attracting people from around the world to northern Arizona. The rug was seamless and is 26 by 36 feet in size with patterns not recognized then.

The patterns for the rug were provided by Sam Joe of Ganado at Hubbell's instruction. Joe was to dig up ancient pottery and find designs of very old and non-contemporary symbols. These designs were the basis for the rug.

Hubbell also had a special block barn made to house the gigantic loom required to weave the rug. The building was 30 feet by 40 feet by 10 feet high inside. The loom's width needed to be about 27 feet wide to accommodate the rug width.

Material for construction of the rug was acquired by Julia Hubbell and her daughters Lilly and Erma. They rounded up 60 white sheep and 18 black sheep to be shorn for rug wool. Julia, Lilly and Erma took two years to process the wool, dying, carding and spinning.

After getting the materials prepared Julia Hubbell began the task of weaving the giant rug, having in mind the patterns Lorenzo wanted to be produced on the rug. She was at the loom from early morning until midnight for three years and three months to complete the 26 by 36 foot 250-pound rug.

Looking carefully at the rug, people will notice it is very high quality, not crude, with bright colors not faded. There are no seams, just one continuous finely woven Navajo rug 36-feet long.

Its size is one reason that not many places can display it and also the reason that no space wants to have it permanently displayed, since it takes up too much room. Luckily, La Posada had a perfect space that can be dedicated to this rug — the entire old railroad station.

Allan Alfet and Tina Mion, La Posada owners, have known the rug's previous owner for many years and have a good relationship with mutual respect on both sides. This is the main reason the world's largest Navajo rug is out of storage in Scottsdale and will be cared for and displayed for the public's enjoyment, here, where it was created.