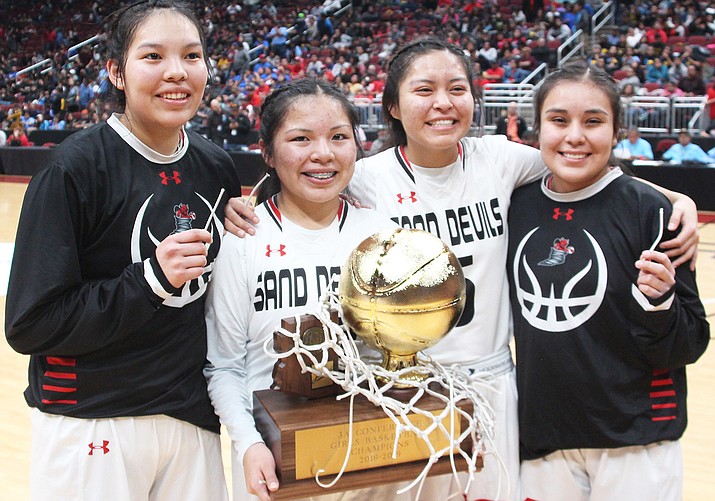 GLENDALE, Ariz. — For the second year in a row, the Page Lady Sand Devils won the Arizona AIA Girls Basketball 3A State Championship — this time they secured a 46 to 33 point win over the Holbrook Lady Roadrunners.

The Page Lady Sand Devils came away with a one-point win over the Tuba City Lady Warriors, 43-42, they then defeated the Winslow Lady Bulldogs, 43-26, to advance to the championship game of the Arizona 3A girls’ final.

The Holbrook Lady Roadrunners posted a 57-45 win over the Tanque Verde Lady Hawks, then posting a six-point win over the Chinle Lady Wildcats, 46-32.

The Wildcats were given a re-entry into 3A Girls State tournament by the AIA executive board after suffering a loss to the Lady Sabercats of Sabino, 55-33.

“All season long, our goal was to be here at the 2019 AIA 3A State Championships title game,” said Ryan Whitehorse, coach of the Page Lady Sand Devils. “We got to be fundamental, be patient. That is the biggest thing, offensively be patient and let the game come to us. We gotta work the ball, right down to the fourth court.”

“We know, they (Page) were the best defensive team in 3A and points will be hard to come by,” commented Greg Perkins, Holbrook Lady Roadrunner coach. “We also have to play good defense, until the final minutes. The team that makes the least number of mistakes will win the game.”

Page opened the game with full court pressure, causing several turnovers. Carmryn Nockideneh turned two of those turnovers into four points and the Lady Sand Devils had 4 to 0 point lead — a lead they did not give up for the rest of the game. 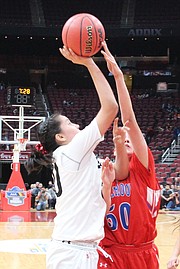 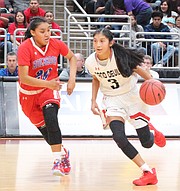 The Roadrunners did manage to score 5 points with 2 baskets by Matehya Aberle and a free by Tristen Ambrose and trailed 9 to 5 as the first quarter ended.

The second frame continued to defensive battle for both teams.

Holbrook’s points were scored by Aberle and a bucket by Madison Chappell, a total of six points. Page now led 16 to 11 points going into the intermission break.

It was all Mikala Benally, who scored for the Lady Sand Devils, at the beginning of the third frame. She converted on three straight turnovers, followed by Diana Secody, who scored a point at the charity stripe after being fouled while driving for a basket in the paint. Taliman scored on an old fashion three point basket to finish Page’s scoring attack increasing their to lead to 26 to 20 at the close of three quarters.

Aberle and freshman Talyan Spencer went on a mini run for the Lady Roadrunners that got the Roadrunner crowd back into the game with a little over three minutes left.

Page closed out the girls’ state title game with by thirteen points, 46 to 33, to earn their second Arizona State 3A girls championship run. Then the celebration commenced.

“The second win, it feels a lot more emotional for me, so proud of the girls,” Whitehorse said. “During the season, we told them, we have a 90 percent chance of coming back here and the support of girls by the community, all the credit goes to the girls. We have a strong core of girls coming back, we only had four seniors.”

“Congrats to Page they desire it. Ryan and his staff did a tremendous job,” Perkins said. “I am super proud of my girls. They gave it everything they could. For my girls to make it this far, as young as we are, it is quite an accomplishment. On behalf of my girls and staff, we thank everyone for their support.”

For the Holbrook Lady Roadrunners, it was a historic season. This was the first time a Holbrook girls basketball team played in a Arizona high school state championship game.

Aberle was the only Holbrook Roadrunner in double figures and had a game high 14 points and Talyan Spencer chipped in seven points.