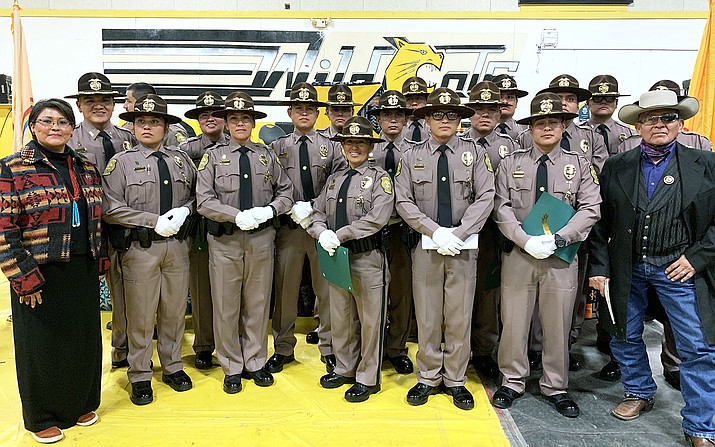 The graduation ceremony for the Navajo Police Training Academy Class 53 held was held at the Chinle Community Center.

“After the ceremony, Delegate Tso and I thanked the officers for their service, dedication, and commitment to our people, communities, and Nation,” Charles-Newton said. “We thanked all who were in attendance, especially the families who were there to witness this momentous occasion.”

According to the training academy, it offers recruits preparation to become Navajo police officers “in an environment of respect, self-discipline, strict accountability, academic achievement, integrity, teamwork and professionalism.”

“The true spirit and selfless dedication these recruits have demonstrated is commendable, as they conquered their first hurdle of what will surely be long public safety careers,” said Damon. “The Navajo People have entrusted these graduates to fulfill their duties with honor, dignity, and respect for tradition. I commend them for their courage and bravery.”

The 16 recruits took their oaths of office and became bone fide Navajo Police Officers who are set to begin duty at their designated districts immediately.

The graduates will now adhere to the Navajo Police Department Mission: “We are dedicated to serving and protecting our people, in partnership with our communities to enhance the quality of life within the Navajo Nation.”