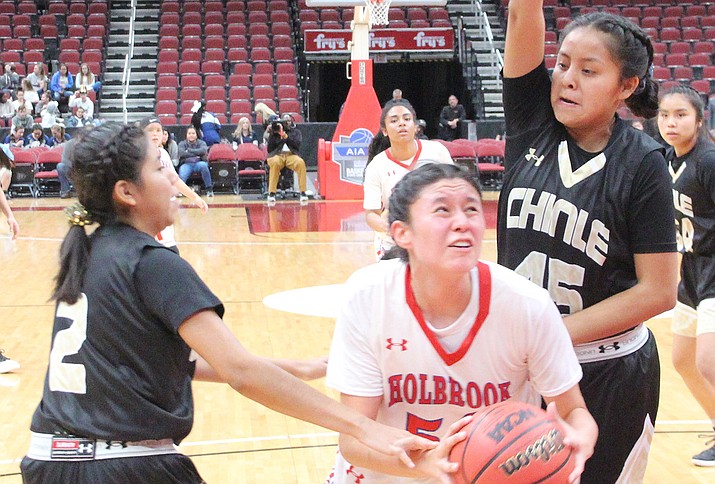 Holbrook’s Matehya Aberle drives into the paint against Chinle defenders Detteebaa Nacona and Katana Benslow, during the Arizona 3A Semifinals game in Glendale, Arizona. (Anton Wero/NHO)

GLENDALE, Ariz. — The Alchesay Lady Falcons made history by winning the coveted 2A State Championship basketball trophy Feb. 23 at Gila River Arena. The Chinle Lady Wildcats were in the running as well, making it to the semifinals of the 3A State tournament, where they fell to Holbrook. 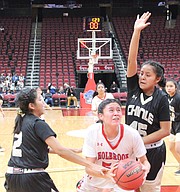 Holbrook’s Matehya Aberle drives into the paint against Chinle defenders Detteebaa Nacona and Katana Benslow, during the Arizona 3A Semifinals game in Glendale, Arizona. (Anton Wero/NHO)

The Lady Falcons earned a number six seed coming into the state tournament, and advanced to the Arizona 2A Girls Championship game with a 49-45 win in the quarterfinals over No. 3 Scottsdale Leading Edge Academy, and a 38-30 win in the semifinals over the No. 2 Chandler Prep Lady Titans.

Alchesay trailed at the end of the opening quarter, 8-7, in the second quarter, the Falcons had a strong offensive output. Devanie Cosay led the charge, along with Vercelia Martinez, and Maria Riley, she contributed 8 points to the run, and the Falcons led at the break, 23-17.

The Lady Falcons were outscored 8-5 in the third quarter, but the fourth and final quarter belonged to Alchesay, with a 12 point finish.

Laney Lupe led the Falcons with 11 points, while Payton Kolar and Kylie Hearn contributed 17 points and 16 points, to the Lady Eagles’ scoring.

In the Arizona 3A Girls State semifinals game, No. 4 Holbrook Lady Roadrunners dominated from the first quarter, with a 14 to 8 point run. In the second quarter, they outscored the No. 8 Chinle Lady Wildcats 8-6 to gain an edge over Chinle ending the half 22-14.

Not to be denied, Chinle closed the gap with a 12-10 point run in the third, but still trailed as the quarter ended 32-26.

The final quarter belonged to Holbrook, who had another 14 point quarter, while holding the Chinle Wildcats to 6 points, with a final score of 46-32.

The Roadrunners were led by sophomore Matehya Aberle with 13 points and Junior Madison Chappell with 10 points, as they team advanced to the Girls 3A Championship game.

The Wildcats were aided in scoring by senior Stacey Begay with 12 points and freshman Aisha Ashley with 10 points.