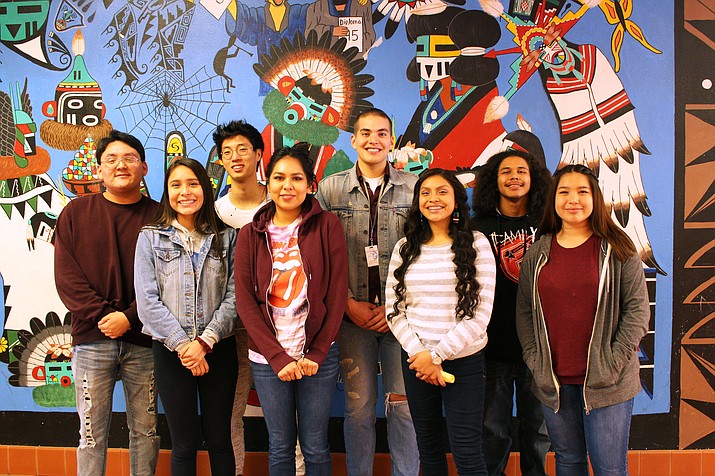 POLACCA, Ariz. — Suicide can be prevented through positive thinking, surrounding yourself with positive people and activities, eating properly and avoiding drugs and alcohol.

That is the message that motivational speaker Dyami Thomas brought to Hopi Jr/Sr High School during an assembly Feb 19.

Thomas, a member of the Klamath Tribe in Oregon, is an actor and model, but considers motivational speaking to youth his most important job. He is especially concerned about preventing suicide.

“You should do something you like every day,” he said. “Anything negative has a rippling effect, so you should surround yourself with positive people and activities.”

Thomas said too many people feel that nobody understands what they have gone through or are going through.

“But you are not the only one. There are billions of people on this Earth and many have gone through or will go through what you’re going through. You need to share the experience with somebody,” Thomas said.

“I know that right now a lot of you are going through something that is hard,” Thomas said.

Thomas said people with suicidal thoughts can fake a smile every day and nobody knows about their problems. He urged the youth to listen whenever anyone comes to them with a problem.

Thomas said in today’s world of distractions, this can be challenging and can also keep Native Americans from their traditions. He also told the youth their ancestors did not go through many hardships so they could fail. This seemed to strike a chord with much of the youth in the audience.

Thomas, who is 25 years old, said he has never smoked or drank.

“How many of your ancestors did that?” he asked.

Thomas said he knows that some think that drugs and alcohol are their only choice.

“But it’s not your only choice,” he said. “Your outcome can be different. You don’t have to do something just because it’s what’s around you.”

Thomas said he never drank or smoked despite hanging out with people, including gang bangers, who did drugs and alcohol.

Thomas said the goal of his presentation was for everyone to leave with positivity and a smile. He said every positive thought is 100 times more powerful than a negative thought.

“The negativity is all in your head. Every obstacle you overcome makes you stronger. You can let it tear you down or it can make you great,” Thomas said.

He said his message was important enough that he drove 32 hours from Canada to get to Hopi.

Thomas said he was brought up by a single mom and this taught him to respect women. He said this also taught him it’s okay to have feelings and cry.

Thomas urged the youth to pay attention when an adult tells them something. He said too often when adults are talking to youth, they just roll their eyes.

“They may say something that may help you with your life,” he said.

Thomas told students that each of them has unique talents.

Thomas has been in films from New York to Paris including the films “The Virus,” “Runestone” and “Runestone: Sizzle Road.” He is in the TV series “Frybread” and he models high fashion clothing. He began runway modeling when he was 4-years-old. He studied modeling and acting when he was 10-years-old. He later studied communication and classical acting at a college in Washington state.

“That is a complete honor and blessing,” he said.