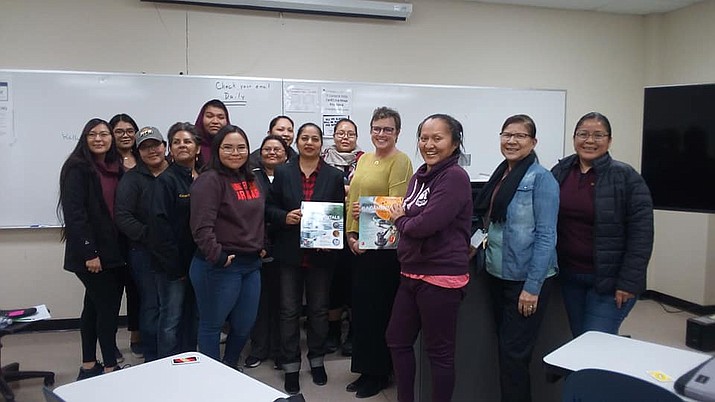 Diné College students and Diné College microbiology instructor Dr. Shazia Tabassum Hakim (middle) from Tuba City pose for a photo at the recent lecture on academic achievement. The lecture was given by Dr. Kelly Cowan (right of Hakim) of Miami University in Ohio. (Photo/Diné College)

The talk was presented at Diné College’s Tuba City Center and attended by more than 30 students and staff and broadcast via ITV through the college’s six campuses. The lecture delved into parental involvement, financial issues and family responsibilities — each of which is instrumental to academic success, studies have shown.

Cowan is a microbiology faculty member at Miami University in Ohio. She was the interim director at the local campus of Cincinnati State Technical College in 2015 and is the author of two microbiology textbooks — one of which is used at Diné College.

She was invited to speak at Diné College by Dr. Shazia Tabassum Hakim, who teaches microbiology, biology, anatomy and physiology at Tuba City. The pair first met in 2005 at an American Society for Microbiologists (ASM) annual meeting in Atlanta and have corresponded with each other ever since.

“The academic achievement gap that accompanies income inequality is growing faster than even the income gap itself. Twenty percent of Americans control 80 percent of the wealth. This has devastating effects in the college classroom, and in society, in general,” Cowan said. “I work to raise awareness and share the research with my fellow professors around the country.”

Hakim said one main message that came out of the lecture was a notion of nothing is impossible, saying, “What we need is a little more interest, more willingness to be part of a solution and not the problem — more persistence and hard work.”

At Diné College, a number of students come from poor backgrounds around the Navajo Nation and some start college in remedial math and reading courses. Hakim said remediation is one remedy that helps bridge the academic achievement gap.

“The lack of parental involvement, financial issues and family responsibilities do contribute to dropout rates,” Hakim said. “On the other hand, the institutions themselves face pressures from society to improve their accountability to keep their existence in the competitive world.”

Don Yazzie, a student at Diné College’s Tsaile campus, said he found out about the Cowan lecture from a classmate.

“I thought it was pretty good,” Yazzie said.

He said there are students everywhere that are under-served and resourced. He said he thinks family and finances are the primary reasons behind student success rates or failures.

“You have to have family behind you to get ahead, we know that,” Yazzie, 45, and from Tonolea, Arizona said, echoing a theme put forward during the lecture by Cowan.

“You can’t get down on yourself. I think the help with school work is here, no matter the college, if you want to get that help,” he said.

A Kentucky native, Cowan earned degrees from the University of Louisville, the University of Maryland and the University of Groningen in the Netherlands. She said her interests in under-resourced students brings together the subjects of generational poverty and civic and educational institutions. She said she believes that knowledge, attitude and practice are the keys to reducing dropout rates.

Also during the presentation, Cowan emphasized the fostering of critical thinking environments that challenge students with a variety of learning techniques.