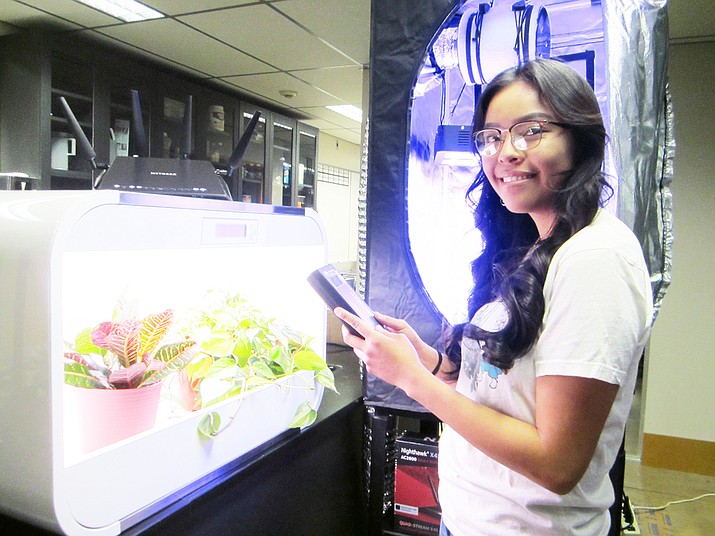 Shawna Greyeyes is part of the Bridges to Baccalaureate program at Coconino Community College, which immerses students in research projects that give students real world experience. (Katherine Locke/NNHO)

The Bridges to Baccalaureate program is a two-semester program funded through a National Institutes of Health (NIH) five-year grant and is designed for underrepresented minorities, specifically Native Americans.

“The program immerses students in research project exposure in the academic year at their home institutions, so in this case CCC,” said Dr. Aaron Tabor, biology instructor and project manager for the Bridges to Baccalaureate program.

The students are then given the opportunity to go to Northern Arizona University for a paid summer research institute, where they are assigned to a researcher to gain more research experience.

“Taking a student and not just having text book knowledge, but actually immersing them into real world experiences is professional development at its finest,” Tabor said. “It’s giving them things that they normally get in the workforce, right now in the academic realm.”

Greyeyes has attended CCC since the fall of 2018. She likes research. The Bridges to Baccalaureate program was the next step in a series of steps she has already taken.

Her first research poster was during the summer of her junior year where she studied water quality. She presented the research at conferences at the Southern Arizona Science and Engineering Fair. Her project took third place overall in the environmental science category.

She applied to the Biosphere 2 program in Tucson the summer after she graduated high school researched water isotopes in the Santa Rita Mountains with her mentor Dr. Jennifer Macintosh.

“When I got here, Andy came up to me about the (Bridges to Baccalaureate program) and that’s just more research, so of course I wanted to do it,” Greyeyes said.

Research has always inspired Greyeyes. She attended a week-long program, Native American Science and Engineering program, because it provided her with everything Greyeyes needed to complete her first project poster.

Tabor explains the experiment that Greyeyes and the students are working on by exposing a food crop to electromagnetic frequencies (EMF).

“We’re now in this technological world, do we know if these devices are causing us harm?” Tabor asked. 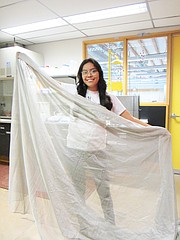 Shawna Greyeyes holds up netting that may limit electro magenetic waves on plants that will be used in the Bridges to Baccalaureate research program at Coconino Community College. (Katherine Locke/NHO)

With the NIH grant, the project is not allowed to use humans to test, so the students are using plant sources that humans eat.

“What happens if we expose these plants to EMF waves and the plants become super big or super small? Tabor asked. “We don’t really know because we haven’t been able to replicate the study yet. But we’re in the initial stages of figuring out, is it potentially harmful for the food source. Now we, as humans, go eat that food source. What the heck happens?”

Greyeyes explains how wifi has electromagnetic waves that radiate off of them that surround people all the time — cell phones, game consoles, digital recorders, wireless earphones.

“Not many people are aware of these waves and how harmful they could be to their bodies, so we’re just testing how those waves affect the plants,” Greyeyes said.

She, a few other students, Tabor and Andy Allen, research director and lab manager at CCC, are still in the beginning stages of the experiment. They need to plant and grow the seeds they are going to test.

There are a lot of things that go into setting up the experiment including creating a control environment where the plants will not be exposed to any electromagnetic waves and the optimum temperature for the plants to grow.

“What we’re doing right now, too, and what I don’t know, and what we’re learning, is how hot it gets inside of the tent,” Allen said. “There’s a fan and I wanted to put plants in there and include everything before we started our project to get some standards — how long, what speed do I need to run the fan, how high should the lights be? So, we’re going to take some temp measurements.”

Allen recently purchased netting that will be used to limit the EMF that some of the plants will be exposed to.

Tabor stressed that the experiment is a collaborative research project with a chief innovation officer, Ron Hurle and Allen.

“Between Ron and Andy, they have really been able to refine the project,” Tabor said. “I’ve just ensured that the science is there.”

Tabor also emphasized the whole point of the project is for the students to gain experience in all aspects of research.

Greyeyes plans for the future but also reaches back

Greyeyes grew up in Flagstaff, Arizona and went to Coconino High School.

Greyeyes said she and her family would go back to the Navajo Reservation on the weekends to Shonto where the family has cornfields and a garden in the canyon. Every summer, they would plant and attend meetings at the chapter house.

Greyeyes said she can trace her interest in science and research back to those weekends spent on the Navajo Reservation.

“We hear a bunch of concerns about uranium mining, bad water quality and overgrazing,” Greyeyes said. “Just a lot of bad environmental issues on the Navajo Nation and I just want to get my degree and maybe go back to my community to help them.”

In the future, Greyeyes wants to work outside.

“Outside in the field,” she explains. “Instead of at a computer and typing away. I just want to be outdoors doing something. I’m not sure yet.”

Greyeyes is part of the CCC to NAU program, with two years at CCC and two years at NAU, graduating with a bachelor’s degree. She wants to continue her schooling and maybe go to University of Arizona for her master’s degree.

But this summer, Greyeyes already has plans. She was accepted into the Harvard Forest Summer Research program. The program is fully paid, students receive a stipend. The program pays for housing and food.

“They pay you to do research,” Greyeyes said. “I’m still shocked just because it’s Harvard. And it’s away from home. I was away from home last year but I got to come home because it was only a five hour drive. But Massachusetts? I can’t come home. It’s going to be different.”

Greyeyes does have a message for students who may be just a few years younger than herself who are contemplating what to do with their own futures.

“Don’t doubt yourself,” she said. “With me, I doubted myself. I saw the program (at Harvard) and I was interested. But I was like, ‘It’s Harvard. I don’t think I’m going to get in.’ But I did get in.”

Greyeyes also said it is important for students to take all the opportunities they can because in the long run, taking advantage of those opportunities will help. She also believes students need to learn how to network.

By network, Greyeyes means getting their voices heard by other people — peers, mentors — making sure to get contact information.

“Because, if anything, they are there to help you,” Greyeyes said. “So just use them as a mentor. There’s a lot of resources out there and you just have to do research to find them. And, once you find them, you find your group of people. And with that group of people, you find a lot of other stuff that will benefit you.”

More information about the Bridges to Baccalaureate program at Coconino Community College is available at https://www.coconino.edu/bridges-to-baccalaureate.