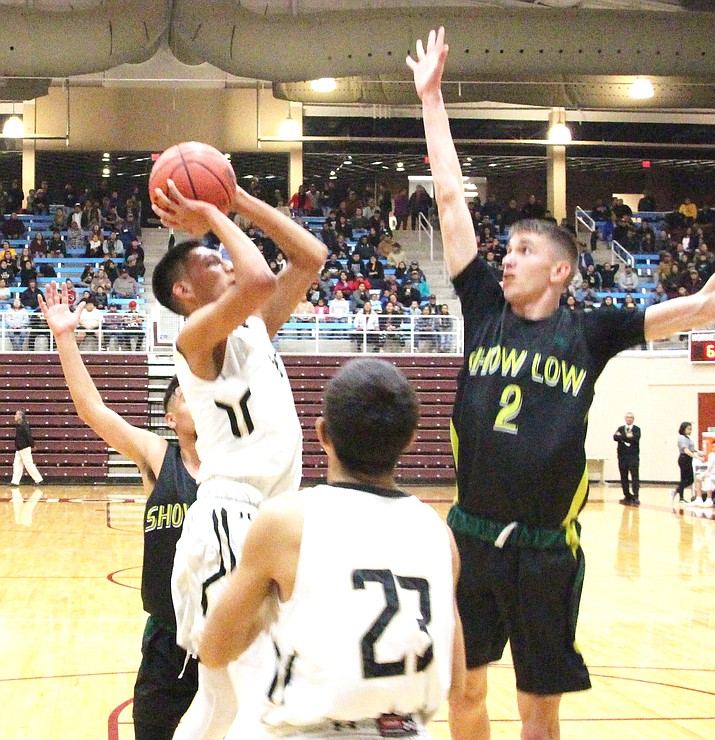 Chinle’s Cooper Burbank drives the baseline and attempts a shot over the out stretched defense of Show Low’s Cotton McGinnis during the 2019 AIA Boys Basketball 3A State championships second round game, hosted by the Ganado Hornets Pavilion. (Anton Wero/NHO)

GANADO, Ariz. — “We are not making any change at this stage of season,” said Chinle Wildcat coach Raul Mendoza. “We are going to do what we have been doing all along to win games: play defense.”

The Arizona State 3A No. 1 ranked Chinle Wildcats dominated the contest from the opening horn over the 17th seeded Show Low Cougars by a score of 67-42 during the 2019 AIA Boys basketball 3A State Championships second round game Feb. 16.

With this win, the Chinle Wildcats, as well as the Winslow Bulldogs, are the only area basketball teams to advance to the quarterfinals of state championships.

They were scheduled to play in the quarterfinals Feb. 19 at the Findlay Toyota Center in Prescott, Arizona.

Results of other area teams; the Window Rock Fighting Scouts were upended by Paradise Honors High School Panthers, 69-43 and the Page Sand Devils lost a closely contested game to the Wickenburg Wranglers, 55-53, these losses end their season for the year.

“We are prepared to play, with help from our inside game and at the same time limit their perimeter game, as much as we can,” 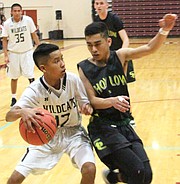 Chinle’s Kylen Yazzie attempts to drive the ball past the defense of a Show Low’s Miquel Belarmino, during the 2019 AIA Boys Basketball 3A State championships second game, hosted by the Ganado Hornet Pavilion. Chinle Wildcats were victorious over the visiting Show Low Cougars, 67-42. (Anton Wero/NHO)

The Cougars went to work inside with big scoring in the paint. Cotton McGinnis narrowly missed a dunk, but scored on his own rebound to open the game, followed by two scores in the paint by Brian Reed to grab an early first quarter lead.

Chinle’s answer came from Curtis Begay and Jason John’s scores after being fouled on shot attempts in the paint. Cael Denetdeal and Bryant Yeahquo added two-point baskets and the Wildcats trailed by single point as the quarter ended, 9-8 in the Cougars favor.

Show Low, led by the play of McGinnis and Reed, opened the second quarter with an 8-2 run and now held on to a 17-11 point lead.

Mendoza quickly called a 30-second timeout to change his defense, according to Wildcat Kylan Yazzie. The coach called for a full court defensive pressure.

The change worked to the Wildcats advantage. They caused numerous turnovers, got defensive steals and easy lay-ups on their end of a 22-0 run.

The run put the game out of reach for the Cougars.

With the lead changes, the mostly Wildcats crowd erupted with cheer after cheer — a true February Frenzy.

The double-digit lead was 19 points entering the intermission break 39-20 in the Wildcat’s favor.

“We had great defensive effort in the second quarter and offensively,” Mendoza said. “Jason John gave us a big lift.”

John put on an offensive show, scoring 13 points in the second quarter.

“I was just feeling it, I am a senior, I didn’t want to go home early in this state basketball playoff game,” he said.

The Chinle Wildcats put on other offensive showing.

“Curtis Begay took over in the third quarter,” Mendoza said.

The Wildcats outscored the visitors 21-8 and led 60-28 with a quarter still left in the game.

The final quarter gave the non-starters for Chinle an opportunity to showcase their basketball skills — they concluded the game, winning 67-42.

Begay and John shared the team game high scoring honors with 16 points each. Bryant Yeahquo came off the bench and added 11 points for the winners, the Chinle Wildcats.

The Show Low Cougars were led by Aahron Villalba with a game high 20 points, followed by Cotton McGinnis with 10 points.