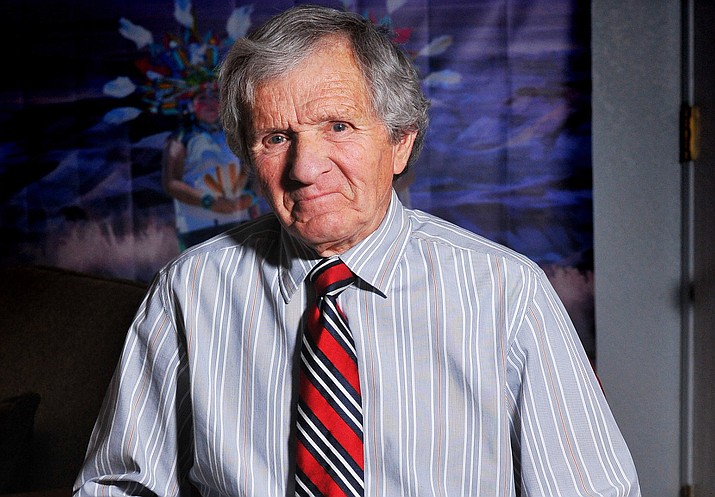 Loye Engelhardt, owner of the AM radio station in Winslow. (Todd Roth/NHO)

WINSLOW, Ariz. — The Navajo-Hopi Observer had the opportunity to talk to Loye Engelhardt, owner of the AM radio station in Winslow. Engelhardt is the only full time employee and owner/manager and has six part-time paid employees. KINO can be heard in Dilkon, Leupp, Joseph City and Holbrook and Winslow, Arizona.

How many years have you had this radio station and where did you move from?

My wife and I came in January 1977 and we moved here from Abilene, Kansas.

What were you doing in Abilene?

Same as here, radio. So all totaled, we’ve been in the radio game 50 years, including 42 here in Winslow.

You came here to buy this radio station?

Another gentleman and I came here to buy the station and we’ve had it since.

From high school on I was working in various stations in Kansas and it was something which held my interest over my younger formative years.

The back of your radio station has two very large satellite dishes, are they still in use?

Yes, they are still in use. We are a member of CBS Radio Network and we also carry the Diamondbacks Baseball team, which comes in on the Sky View satellite.

How do you manage to get to all the Winslow away games?

I’ve been fortunate to travel with the teams to many of the distant games. It’s routine traveling north to Ganado, Monument Valley, Chinle and then points south as well. Art Griffith from Winslow high school as well as other staff have helped me greatly with broadcast duties.

Do you have any employees?

Yes, we do have part-timers. We have about six paid part-time employees. We are now the only local news outlet anymore so we need people to prepare information for news broadcast and also to deliver radio news. Then there people who send us news items or call in with news. Winslow no longer has a newspaper so we try to fill some of the need for local news.