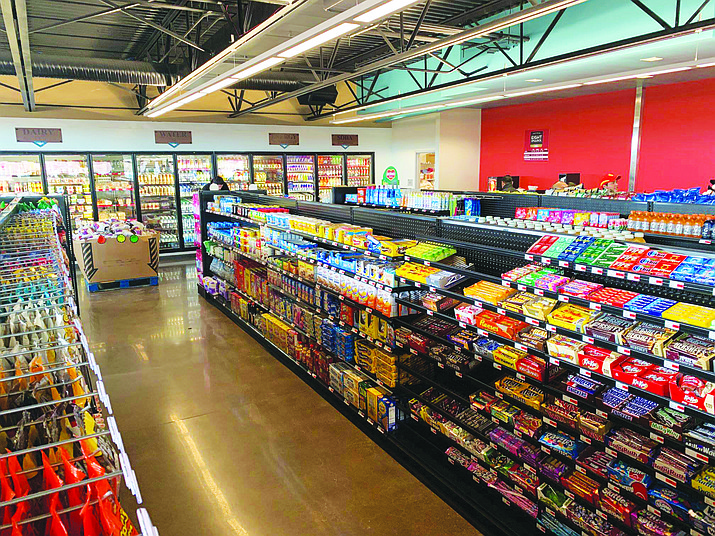 Shelves are stocked and ready for purchase at the new Dennehotso Market located in Dennehotso, Arizona Feb. 15. (Photo/Navajo Nation Office of the President and Vice President)

DENNEHOTSO, Ariz. — It took nearly 17 years to see the realization of the new Dennehotso Market, but it was worth waiting for as hundreds of local residents attended the grand opening of the new market on Feb. 15.

Local residents and travelers got to enjoy the 6,700-square-foot facility that includes a convenience store, gas station, deli and laundromat. The store provides much-needed goods and services to remote consumers who otherwise have to drive miles for simple things as bread and milk, and for tourists to stop, rest, fuel up, get refreshments and to spend their money.

The store is located on a 10-acre site on U.S. Hwy. 160 and Indian Route 6465, a prime spot because tourist destinations are nearby, such as the Four Corners, Monument Valley, Canyon De Chelly, Shiprock, the Grand Canyon and Lake Powell.

“Our dream came true today and we are so happy about it. [The people of] our community and local leaders since 2003 must be given ultimate credit for their support and faith in the project,” said Benally. “The Division of Economic Development staff, particularly Margie Dee, Tony Perry and Beatrice Watchman, all played a major role in providing technical and financial support.”

Benally explained in order to get the project favorable consideration by the Navajo Nation Division of Economic Development’s Five-Year Plan, they had to get the project shovel-ready and prove it was viable. They accomplished all of that and it was eventually added to the list several years ago, but did not receive immediate funding.

The realization of this project was not easy but it did overcome many challenges. Benally said once she stepped down from the tribal council in 2015, the project was nearly removed from the list of projects. Fortunately in 2016, members of the 23rd Navajo Nation Council saw a need and supported it by including the project in a much larger $150 million five-year plan that funded $2.8 million for the market. The legislation used part of the annual interest earned income from the principle of the fund.

Then another hurdle, then-Navajo Nation President Russell Begaye threatened to veto the project but it was saved by strong advocacy of Dennehotso residents and current Navajo Nation Council Delegate Nathaniel Brown.

The project costs $4.3 million and created 50 temporary construction jobs and 20 permanent jobs with its operation. The store is expected to generate approximately $45,000 a year in sales tax revenue and an additional $194,000 annually in fuel excise tax revenue.

Grocery stores and smaller markets are few and far between in rural areas of the Navajo Nation, which only has 13 grocery stores for nearly 200,000 citizens living on the largest Indian reservation in the country. The Navajo Nation stretches across more than 27,000-square-miles across the four states of Arizona, New Mexico, Utah and Colorado.

Tyrell Descheny, who lives between Dennehotso and Rock Point, Arizona said the new market provides convenience for him and his family.

“Most families drive, such as myself, more than an hour or two to get their necessities,” he said about the lack of stores on the reservation. “[This market] saves time, money and travel — supporting local business is what it’s all about to me.”

“I really want to thank all the community members, ahéhee’ nítsaagó,” he said. “This was all possible because of you.”

Benally said they overcame many challenges to finally witness this day, but it was well worth it.

“Today, we all witnessed this dream become a reality,” she said

She encouraged travelers near and far to stop by and shop at their beautiful new market.

“Just take a break and catch your breath,” she said. “The view is so beautiful.”

Dyron Murphy Architects were designers of the project and Arviso Construction Company were the general contractors. Native Markets, a brand of Sandia Oil Company, will operate the store.