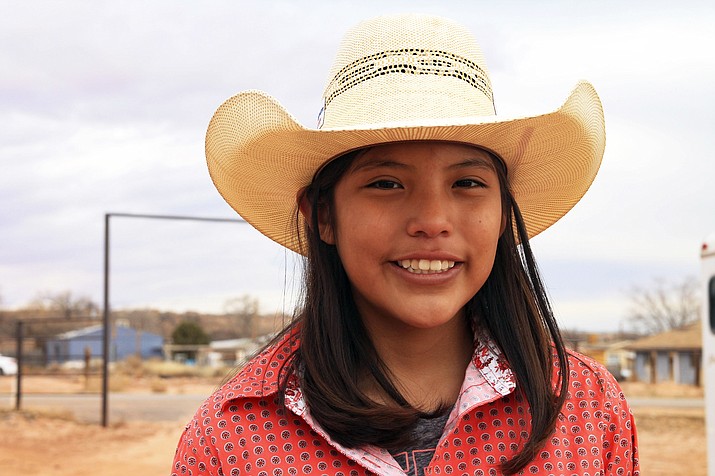 Shilah Williams of Tuba City, Arizona qualified for the Jr. National Finals Rodeo last year during a Roy Cooper Jr. Calf Roping event in Window Rock. Since then Shilah went on to compete at local rodeos and in Ignacio, Colorado before heading to Las Vegas last December. (Loretta Yerian/NHO)

TUBA CITY, Ariz. — Shilah Williams’ dark hair swirled around her shoulders and her chocolate brown eyes smiled shyly as she introduced her horse, Sissy, who carried her to the 2018 Jr. National Finals Rodeo in Las Vegas in December.

Sissy, an 8-year-old buckskin mare, was small, standing around 14.5 hands with a quiet demeanor and ears that flicked backwards and forward, listening.

“I like her because she is not that tall and it gives a chance for you to rope the calf. Most of the horses are big," Shilah explained. "When the horses are big you have to put all your strength in when you rope... (Sissy's) fast, right when you get out of the box she’ll take off toward the calf.” 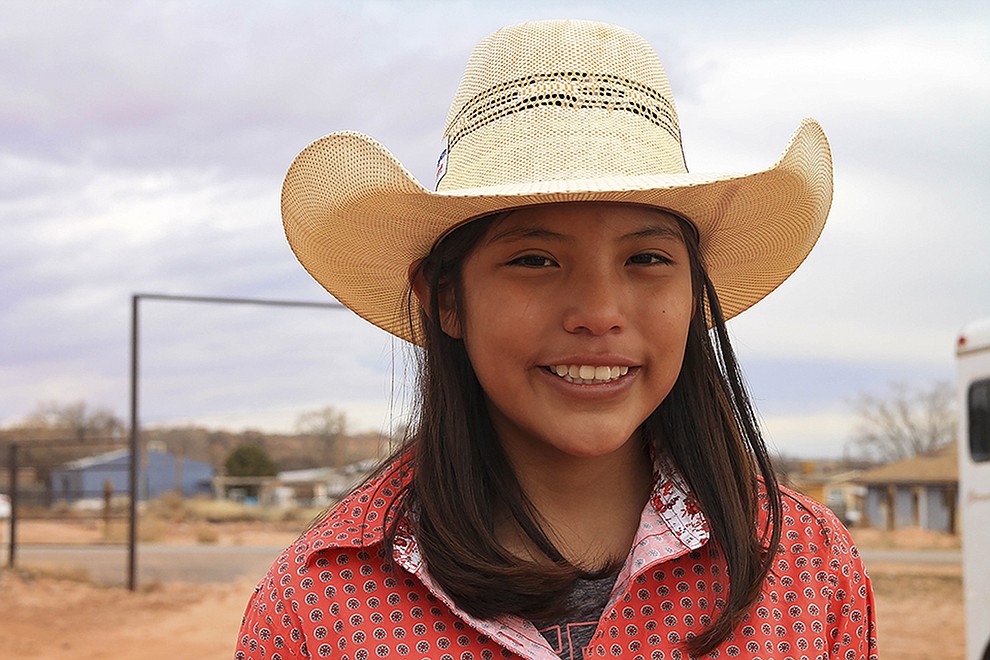 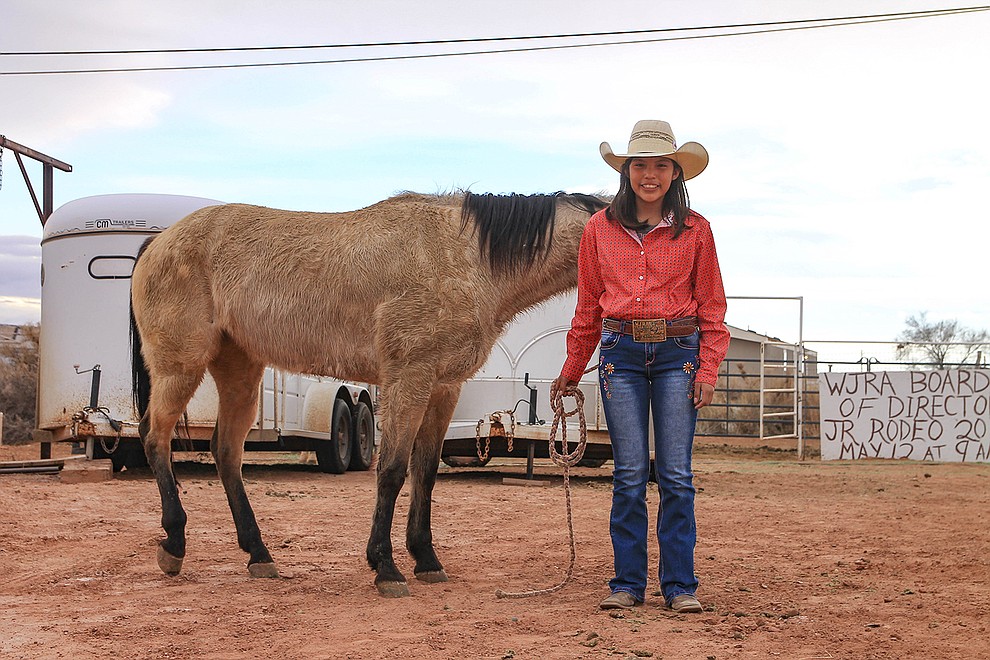 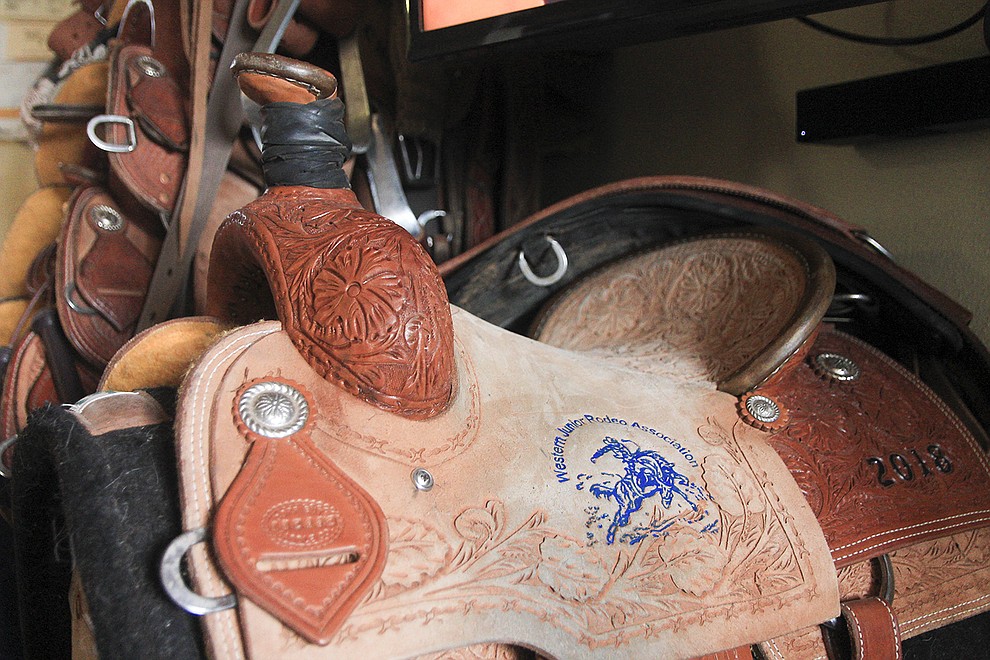 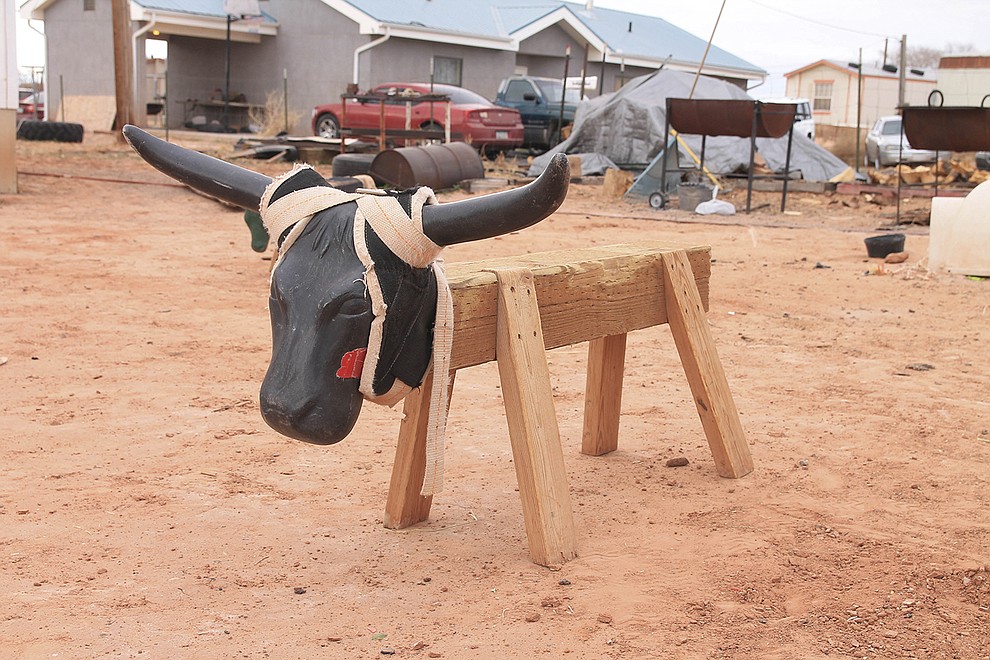 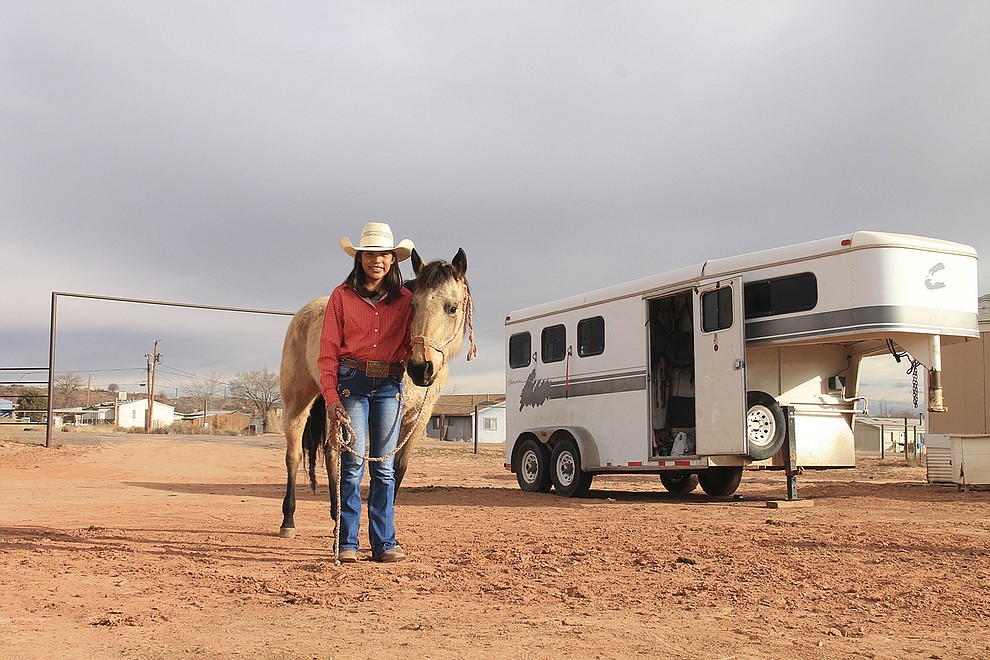 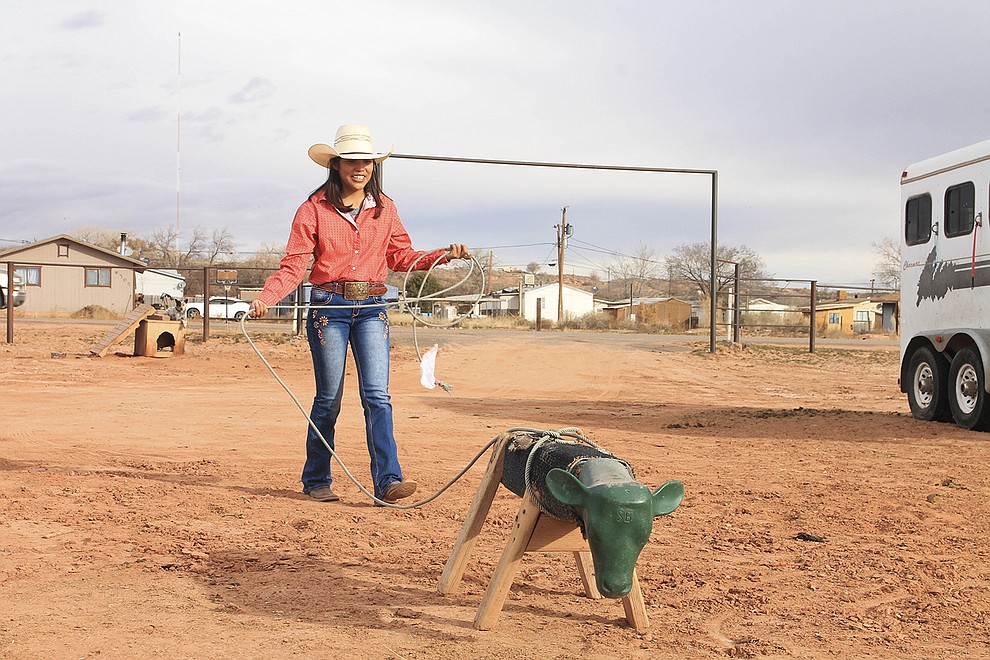 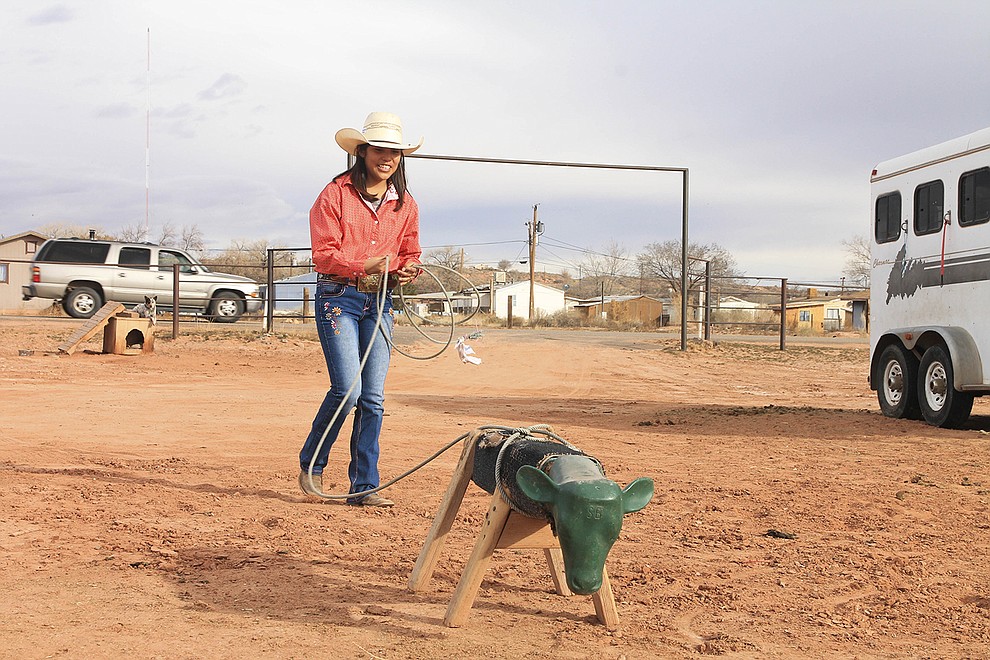 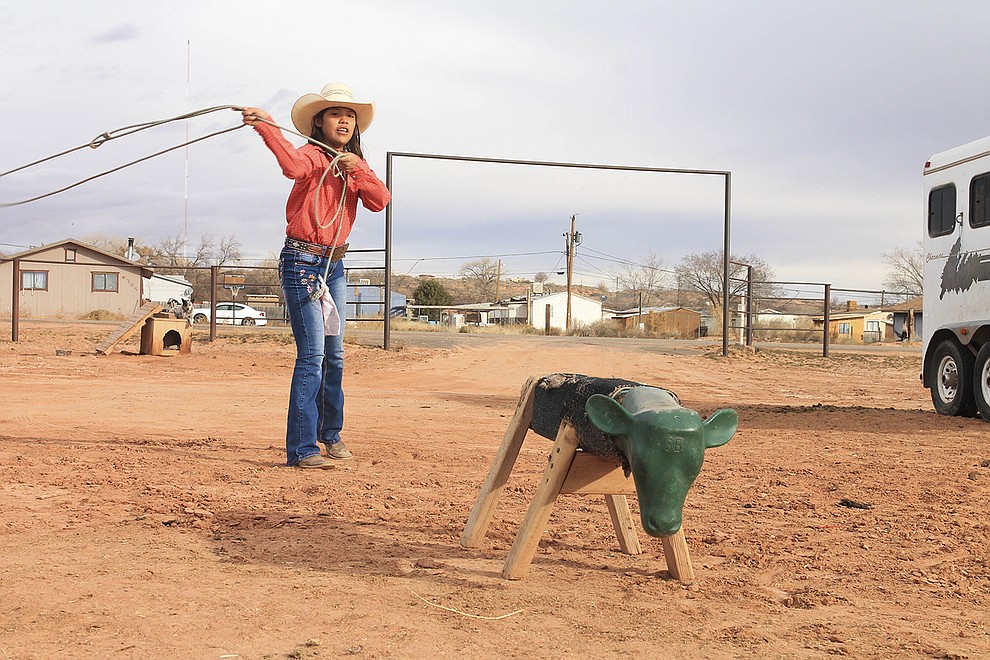 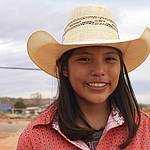 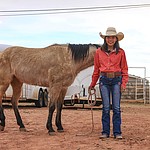 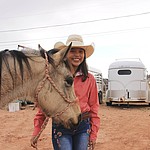 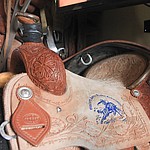 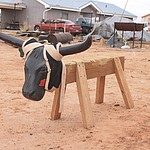 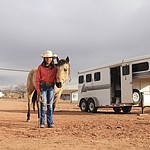 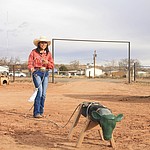 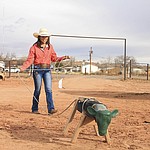 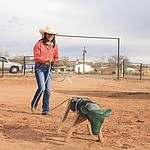 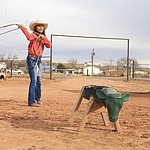 Rodeo and horsemanship is a way of life for the Navajo people. It’s a tradition, part of the culture. Most families have one or two horses and those who don’t have a relative who does.

“Everybody has horses and that’s kind of what they do,” Shilah’s father, Brandon Williams said. “They’re kind of around animals all day — it keeps us busy.”

Shilah, who grew up in Tuba City, has been riding in rodeos since she was 4 years old.

“At first I did wooly riding (sheep riding) at four and then my dad — his friend let us borrow a horse from him and we started doing barrel racing and flag racing and goat tagging,” she said.

Shilah has had several horses since the family friend — the Tallsalt family lent her Prince. She rode Blue Eyes for goat tying competitions and tried Duke but soon found out he was not cut out to be a rodeo horse. Now she rides Rider, who she uses for barrel and pole bending competittions. Sissy is used for breakaway roping events.

Shilah competes locally through the Western Jr. Rodeo Association. Her father is the president of the association and helps schedule rodeos and events for junior rodeo competitors. It was through a Facebook post that he was made aware of the Faith Holyan Jr NFR Qualifier roping in Window Rock. The qualifier event was made possible through Roy Cooper’s Jr Calf Roping in May 2018.

Breakaway roping consists of a rider and a calf in a chute. When the calf is released horse and rider spring from the chute and the rider ropes the calf’s neck. The end of the rope is attached to the saddle horn using a string. As the calf runs down the arena the rope breaks away from the horn. A winner is determined by the contestant with the shortest amount of time to rope the calf.

Shilah Williams learned to rope and ride at a young age. Today, she is working toward competing for a second time in the Jr. National Finals Rodeo in Las Vegas this December. (Loretta Yerian/NHO)

An average time to rope the calf is around three seconds but can be achieved in less than two seconds.

“My time was four and under in Window Rock,” Shilah said.

Shilah learned to rope from her dad.

“He taught me to rope the dummy and then we tried it on the horse — we kept on trying it on a horse until I got used to it,” she said.

Roping a live calf from horseback is a big challenge when learning to rope. Shilah said it takes patience and practice to throw the lasso just right and capture the racing calf. She said she ropes every day to improve her skills.

“On the ground you can throw it right there but on a horse sometimes the horse's head is high,” She said. “What I’m watching for is the neck (of the calf) and not getting my horse's head in the loop (of the lasso).”

The Jr. NFR takes place the same time as the National Finals Rodeo in Las Vegas. The annual event takes place at the Las Vegas Convention Center in December.

Shilah Williams with her horse, Sissy and father Brandon Williams. Shilah competed at the 2018 Jr. NFR in Las Vegas. She hopes to return this year. (Loretta Yerian/NHO)

Considered to be the biggest gathering of professional cowboys and cowgirls in the world, the NFR is held once a year with top competitors earning more than $300,000. The Jr. NFR is a way for up and coming competitors to get a foot in the door.

During her time in Vegas, Shilah said she was nervous and excited. It was Shilah and Sissy’s first time in a big city and was the first time the Williams family had been to Las Vegas for the NFR.

“That was her first and our first time being in a big city, with our animals anyway," Brandon said. "Being in the city everything is so crammed up, that’s why we live out here — we got open spaces… it was kind of go, go, go all the way — hectic."

Brandon said it was an exciting experience to go from competing locally to the NFR.

"I think it was a good learning experience for her and for us also, learning what is out there,” he said.

Shilah competed against 26 other ropers for three rounds in the 10 & Under Girls and Boys Breakaway. She missed her calf in the first and third round and roped her calf in the second round with a time of 3.44 seconds.

Shilah hopes to qualify for the Jr. NFR again this year.

She said getting there in 2018 took some work, but she is willing to put in the extra effort.

“I want to go back so I can make some progress this time,” she said.