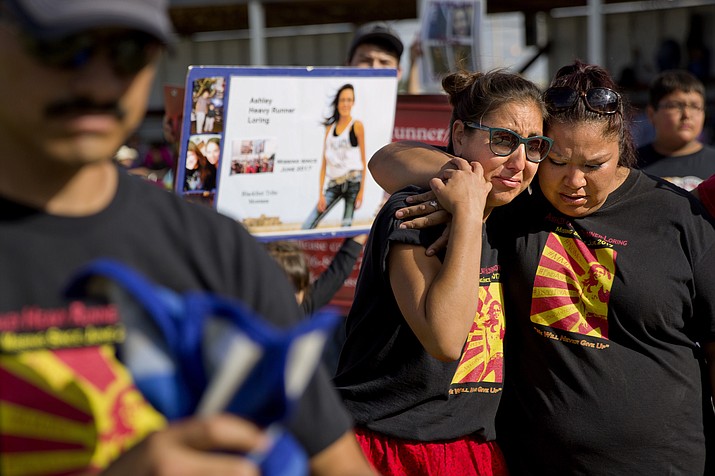 FLAGSTAFF, Ariz. — A recent report on cases of Missing and Murdered Indigenous Women and Girls in urban areas released by the Urban Indian Health Institute, a division of the Seattle Indian Health Board, said the cases, and lack thereof, are a nationwide data crisis.

The report said that in 2016, the National Crime Information Center reported that there were 5,712 reports of missing Native women and girls, though, NamUS, the U.S. Department of Justice’s federal missing persons database logged only 116.

The Urban Health Institute stepped in to assess an actual number of missing and murdered indigenous women in cities across the U.S. and “assess why obtaining the data on this violence is so difficult, how law enforcement agencies are tracking and responding to these cases and how the media is reporting on them.

Why is there a high percentage of Native women living in urban areas?

According to the report, the majority of Native people live off reservation in urban areas because of forced migration, 1950s relocation and termination policies, and high unemployment, lack of educational opportunities and housing on reservations.

The study finds that institutional racism — the process of purposely discriminating against certain groups of people through the use of biased laws or practices — is at play in many cases.

“The study… highlights the results of a deeply flawed institutional system rooted in colonial relationships that marginalize and disenfranchise people of color and remains complicit in violence targeting American Indian and Alaska Native women and girls,” the report said.

Why doesn’t the data match between federal agencies, media and family?

According to the report, racial misclassification is the incorrect recording of a person’s race or ethnicity — for example, a Native person is incorrectly recorded as white. Misclassification generally favors the larger race, so Native people are often misclassified as white, but the reverse is rare.

The Urban Indian Health Institute (UIHI) attempted to collect data from 71 cities across 29 states from 1900 to the present. The information provided varied across jurisdictions. The oldest case was from 1943, but two-thirds of the cases in the data UIHI received was from 2010 to 2018.

“That suggests the actual number of urban MMIWG cases are much higher than what UIHI was able to identify in this study,” the report said.

What did UIHI find?

Lissa Loring points Blackfeet law enforcement officers to a trailer in Valier, Montana, where she believes clues have been found during a search for her cousin, Ashley HeavyRunner Loring, who went missing last year from the Blackfeet Indian Reservation, July 11. This search is motivated, in part, by the family’s disappointment with the reservation police force, a common sentiment for many relatives of missing Native Americans. (AP Photo/David Goldman)

In a snapshot, UIHI identified 506 unique cases of missing and murdered Native women across 71 selected cities — 128 (25 percent) were missing persons cases; 280 (56 percent) were murder cases and 98 (19) had an unknown status. The median age was 29.

Approximately 75 percent of the cases that the UIHI identified had no tribal affiliation listed and 66 out of the 506 cases were tied to domestic and sexual violence.

The study said when a case was identified as status unknown it was because law enforcement gave a number of total cases but did not clarify how many were missing and how many were murdered (16 cases) and when a case was listed on a missing person’s database but had been removed, the study could not verify whether the woman or girl was located safe or deceased.

Where did the study find the cases?

The Southwest accounted for 157 of the cases, Northern Plains 101, Pacific Northwest 84, Alaska 52 and California 40. The cities that figured most often were: Seattle 45, Albuquerque 37, Anchorage 31, Tucson 31 and Billings 29.

Albuquerque had the largest number of cases with unknown status (18), with San Francisco (16), Omaha (10) and Billings (8). The study said that Albuquerque and Billings police departments in responding to Freedom of Information Act requests, acknowledged them but did not provide records or information and did not respond to follow up questions.

Difficulties in obtaining the data

According to the report, 71 city police agencies and one state police agency were surveyed. Forty agencies (56 percent) provided some data. Thirty-three of the 40, searched their records though not all of those provided complete data, 14 agencies did not provide any data, 18 agencies still have pending requests (the cutoff date for the study was Oct. 15, 2018).

“Nearly two-thirds did not provide data or provided partial data with significant compromises,” the report said.

And some agencies, including Flagstaff’s, required fees to access the data totaling $4,464. The UIHI budget for FOIA requests was $68.

Men and women who attended the Women’s March in Phoenix marched in memory of indigenous women who are missing or have been murdered. (Photo by Melina Zuniga/Cronkite News)

According to the report, nine cities reported they could not search for American Indian, Native American or Alaska Native in their databases “despite the common and expected practice of classifying victims by race in data systems.”

“[Many] Native Americans adopted Hispanic names back during colonial times…our crime systems are not flexible enough to pick out Native Americans from others in the system… it would be impossible to compile any statistically relevant information for you,” said a representative from the Santa Fe police wrote to the UIHI.

In Seattle, there was confusion over the letter ‘N.’ The department said the N being used in the 60s, 70s and early 80s was for Negro, not Native American, despite UIHI being provided both lists, which had significant overlaps.

Other cities provided lists with Indian-American surnames (like Singh) in addition to Native American.

Lack of coverage in the media

Ninety-five percent of the cases in the study were never covered in the national or international media and when they were covered, media focused on reservation-based violence.

“Though coverage of reservation-based violence is critical, this bias does work to collectively minimize this issue in urban spaces,” the report said. “It also bolsters stereotypes of American

Nicole Joe's mother, Rosemary Begay, (right) holds a candle at a vigil held Feb. 14 in Flagstaff. The vigil also called attention to other Native women who are missing or who have been murdered. (Katherine Locke/NHO)

Indian and Alaska Native people as solely living on reservations or in rural areas, perpetuates perceptions of tribal lands as violence-ridden environments and, ultimately, is representative of an institutional bias of media coverage on this issue.”

In addition, the report said media used language that could be perceived as violent and victim blaming in its coverage of missing and murdered indigenous women and girls cases, which also perpetuates negative stereotypes of Native women.

The report said that combined with the inaccessibility of law enforcement data, the lack of reporting means the general public does not have an accurate understanding of the issue and two-thirds of the cases that happen in urban areas are rendered invisible.

“This not only prevents critical awareness of the issue and is hurtful to victims’ families and communities, it limits efforts to engage in cross-cultural community dialogue on how to enhance safety, not just for urban [Native] women and girls, but for all who live in the cities in which they go missing and are killed.”

“Until there is cooperation and better tracking systems at all government levels, the data on missing and murdered indigenous women will never be 100 percent accurate, which is what we need to strive for in order to protect our mothers, daughters, sisters and aunties,” said Abigal Echo-Hawk, director of the Urban Indian Health Institute in a quote in the report.

More information is available at http://www.uihi.org/wp-content/uploads/2018/11/Missing-and-Murdered-Indigenous-Women-and-Girls-Report.pdf.