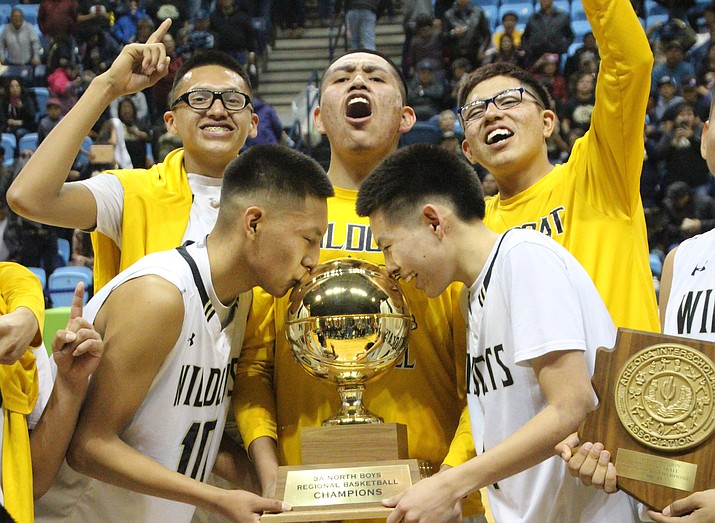 Chinle Cooper Burbank and Curtis Begay, apply the traditional kissing of the Championship trophy, after the 3A north Championship game at the BeeHoldzil Fighting Scouts Events Center, in Fort Defiance, Arizona Feb. 9-10. Chinle Wildcats were 48 to 36 point winners over the visiting Page Sand Devils. (Anton Wero/NHO) 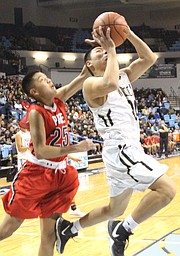 In the boy’s section, the Chinle Wildcats (25-4) claimed the championship trophy with a double digit win over the Page Sand Devils, 48-36. The Window Rock Fighting Scouts (13-13) were 72-61 winners over the Monument Valley Mustangs (16-10) for a third place finish.

The following is an official Arizona schedule for local teams. All games are scheduled to start at 6:30 p.m.

No. 22 Benjamin Franklin plays No. 11 Ganado at Ganado High School.

No. 20 Coolidge plays No. 13 Holbrook at Holbrook High School.

No. 23 Benjamin Franklin plays No. 10 Page at Page High School.

No. 8 Chinle will host the winner of ALA Ironwood/Stafford matchup.

No. 5 Tanque Verde will host the Monument Valley/Pusch Verde winner.

No. 3 Yuma Catholic will host the Show Low/Window Rock winner.

No. 6 Winslow will host the Benjamin Franklin/Ganado winner.

No. 7 Tuba City will host the Kingman/Kingman Academy winner.

3A Boys second round schedule, Feb. 16

No. 1 Chinle will host the Show Low/Monument Valley winner.

No. 3 Paradise Honors will host the Catalina/Window Rock winner.

No. 4 Winslow will host the Coolidge/Holbrook winner.

No. 5 Push Ridge will host the Safford/ Blue Ridge winner.

No. 7 Wickenburg will host the Benjamin Franklin/Page winner.

The girl’s quarter finals will start Feb. 18, for the 3A girls at the Toyota Center in Prescott, Arizona. The semifinals games will be held at Gila River Arena, Feb. 22 and the girls championship game is scheduled is scheduled to held at the Gila River Arena Feb. 23 at 1 p.m.

The boy’s quarter finals will start Feb. 19, for the 3A boys at the Toyota Center in Prescott, Arizona. The semifinals games will be held at Gila River Arena, Feb. 22 and the boys championship game is scheduled to held at the Gila River Arena Feb. 23 at 3 p.m.

With the win, the Chinle Wildcats will enter the 2019 AIA boys basketball 3A State Championship seeded number one and will host a second round game with the winner of the No. 16 seed Monument Valley Mustangs and No. 17 Show Low Cougars match up.

Over in the girl’s section, the Page Lady Sand Devils (23-4) were crowned champions of the 3A girls’ North region by defeating the Chinle Lady Wildcats (16-8) with a score of 52-34. The Tuba City Lady Warriors (16-8) claimed the third place honors when they set back the Ganado Lady Hornets 53-46.

The Page Lady Sand Devils are seeded No. 2 and will wait to meet the winner of the No. 15 Florence Lady Gophers and No. 18 Gilbert Christian Lady Knights Feb. 15 at 6:30 p.m. in Page.

The No. 11 Ganado Lady Hornets will entertain the Benjamin Franklin High School Lady Chargers Feb. 12 at 6:30 p.m. at the Ganado Hornet Pavilion.

During a pre-game conference with Chinle head coach Raul Mendoza the focus was on the up and coming 2019 AIA 3A state boys tournament.

“We are seeded number one for the state tournament and we have to start preparing to play at the next level,” Mendoza said. “When you’re number one, everyone wants to bring their best game and test you, you have to be prepared. We would like to use this game against Page to prepare for state.”

The Wildcats came out focused on offense and defense, but Page came to play.

“We are going to play hard and give it (the game) our best, it’s going to be an exciting game,” said Sand Devil coach Russ Skubal.

Cooper Burbank and Curtis Begay put the Wildcats on the board with four points each, and Colin Yazzie connected on buzzer beating three pointer, with the assist going to Burbank.

The Page Sand Devils were led by Gabe Gomez with five points and Aho Sloan hit a basket from beyond the arc for three points.

Both teams played evenly in second quarter with the advantage going to Chinle, 10 to 9. The Wildcats increased the lead by a point and led at intermission by four points, 23-19.

When the Wildcats and Sand Devils stepped up their defense pressure in third period, they put a lid on points in the paint and points were hard to come by. Both teams managed to score 10 points apiece. Chinle still led by 4 points heading into the final quarter, 33-29.

The Wildcats opened the final quarter with 10-0 run and now held a 13- point lead with 3 minutes and 30 seconds left, 43-29. Burbank was consistently scoring 6 points per quarter and accumulated a game high 28 points. Chinle cleared the bench and cruised to a 48-36 point win.

“We have to be consistent both on offense and defense,” Mendoza said. “Our goal was to be number one at the end of the season, now we are.” Mendoza said. “By the way, that was my 759th win of my young coaching career.”

“We reminded the girls to stick to what we did all season,” said Page Lady Sand Devils coach Ryan Whitehorse. “Have fun — enjoy the moment, stay motivated.”

Five Lady Sand Devils scored in first quarter, including an opening trey by Mikala Benally and four points by Myka Tallman, while holding the Lady Wildcats to seven points, with scoring by Kristen Tso, Aisha Ashley and Stacey Begay.

Meagan Fuller connected on two free throws for the Lady Sand Devils with less than two minutes left, lifting Page to 7-3 point advantage and they never trailed the rest of the game. The first quarter ended with Page out in front, 13-7.

The Page Lady Sand Devils doubled the Lady Wildcats’ total output and had a 23-12 lead going into intermission.

Page narrowly outpointed Chinle 13-11 to increase the lead to 36-23 as the third quarter ended.

Page’s Tallman and Camryn Nockideneh combined for 14 points in the final quarter, while the Lady Wildcats responded with 11 points by Ashley and Begay. The final score was 52-34 in the Lady Sand Devils favor.

“We played a good team, I think they (Chinle) will do good next week during the state tournament,” Whitehorse said.

“We ran our game plan, Page plays one of the best defenses in our section,” said Chinle head coach Francine McCurtain. “We have to improve and play better in the state tournament from here on ... with one loss you’re out.”

The Chinle Wildcats was led by Ashley with 12 points and Begay contributed 10 points.