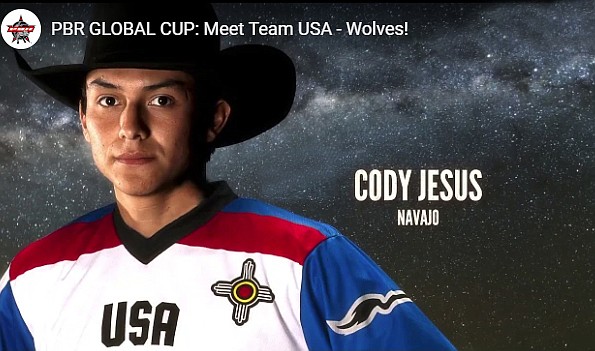 Cody Jesus is one of the All-Native American team set to compete at the Professional Bull Rider event Feb. 10. (Photo screenshot of PBR Global Cup event via YouTube)

There’s a first for everything. And the Professional Bull Riders will include an All-Native American team to compete in the 2019 Global Cup next weekend.

PBR chief executive Sean Gleason said they are the first in major sports league to make such a move.

Since the Global Cup is all about the home country defending its soil from foreign lands and “given the sovereignty of Natives in the U.S.,” Gleason said it only seemed fitting to have a Native team.

“The PBR has a significant number of Native Americans that all ride on a very high level on our tour,” he said. “Celebrating the Native American lifestyle has been near and dear to my heart and there are many Native American riders that would represent their nations well.”

Team Wolves, the All-Native team, is one of the two USA Teams to compete. The other USA team of non-Native bull riders is Team Eagles.

Gleason said he consulted with the team, many Keyshawn Whitehorse, Stetson Lawrence and Ryan Dirteater, on their name and logo for the event.

Dirteater and Lawrence were the first two chosen for the team. From there they had direct input on who would coach them. Other riders, Native and non-Native, recommended Wiley Peterson, former professional bull rider.

Once Petersen came on he chose the rest of the team, which “wasn’t a tough decision,” he said.

The Shoshone-Bannock citizen, and now a physician’s assistant, used the top standings to help him choose and also wanted to recruit younger guys who haven’t been on the big stage.

After that it was looking at other guys, younger guys, or guys that haven't quite had the success to get them on the televised scene but the potential is there. It was a matter of time before they were in the top standings of the PBR,” Peterson said.

With a full team and his assistant coach, Bo Vocu, president of the Indian National Finals Rodeo, by his side, Peterson is ready to go and is confident in the team.

Up to this point, the team has been watching videos and keep up with Coach Petersen. The technicalities are important. However, Petersen wants to make sure the rider learns more than than that from this event.

“As a retired bull rider, I was so worried about riding the bull and I didn't take a minute to sit and enjoy the experience,” he said over the phone from his home in Idaho. “Even though bull riding is an independent sport, we all need support. We all need people cheering us on and helping us out. This experience is going to solidify that even more. Hopefully, these young men realize that ‘I need help, but I need to do a lot of the work and we need each other.’”

He also hopes this experience will help younger riders with the pressure of a televised performance.

“For the young guys who haven't experienced something like this on a big scale on the sport of bull riding, this is going to take their careers to the next level,” he said. “They’ll have this experience behind them and their perspectives will change and they'll be able to handle pressure better because they've been on this big stage.”

Everyone watches the action in the arena but Team Wolves rider Dakota Louis said viewers forget the work it took for all the riders to get to that point.

“They don't see what leads to all to that, the hours working training mentally and physically to be at the level in the professional. It takes a lot of work and makes you appreciate it at that level,” he said.

The Northern Cheyenne citizen hopes to come out a champion, well, because this is “like the Olympics of bull riding.” It’s a dangerous sport, too. More than basketball.

Even though this isn’t basketball, what many consider the sport of Indian Country or at least the most popular, the 26-year-old said the support from Native people for them as Native bull riders is still there.

“You get the same feel behind basketball. Everyone is behind them,” he said. “For us being all Natives, not only representing all of us but all of Native America as well. We got a big supportive system.”

Many people rodeo in Native families, said Louis. Most of them live on a ranch, break horses and rope too.

They’re all part of that cowboy culture that exists in rural areas of the country. Rodeo has gotten so popular among Natives that there’s the Indian National Finals Rodeo.

Peterson said the opportunity that the sport provides is part of its huge appeal to Native communities along with the independence and free spirit Natives tend to embrace.

“Bull riding definitely has all of it with the danger and excitement. It also gives young man the opportunity to make a pretty good career. You’re not guaranteed to make a living as a bull rider because you want to. There are a lot of things that come into play,” he said. “It definitely offers an option if you go the skills and get out of their home area and travel and rides some bulls. It’s pretty good opportunity.”

Gleason used to work in the video and music industry before coming to the PBR as the CEO. He said the shared heritage and history of the American cowboy is what made Native people gravitate toward bull riding and rodeo.

“Contrary to what Hollywood says Natives were huge part of that culture of driving back the railheads. Not a history of cowboys versus Indians. They worked alongside one another. I think the cowboy culture of working cattle and horseback and doing all they do was a very shared history for both Natives and non-Natives,” he said. “I think as we look at the competitors in rodeo and bull riding today, they all share the same roots of a major culture. They’re all cowboys.”

With that cowboy spirit, Peterson hopes they come out with a win. Just so they can do some more interviews after.

“I hope it all works out and we have the chance to show the world what these young men are capable of,” he said. “Everyone has the opportunity to be a world champion.”