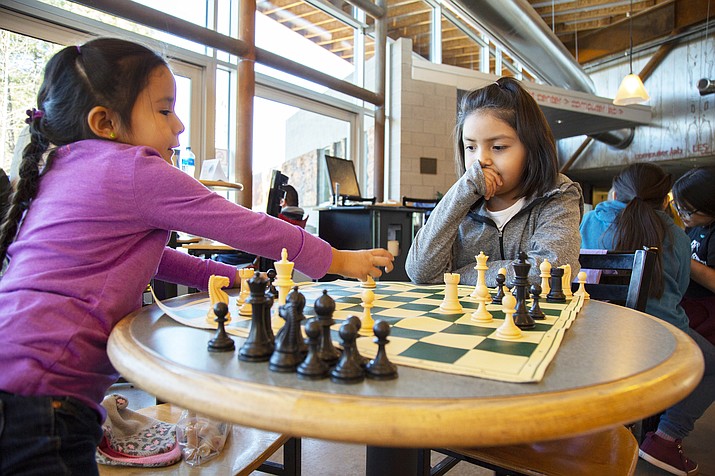 “I like the curiosity of what’s going to happen next,” Nez said.

Nez was one of more than 70 players at the Fifth annual Flagstaff All-Girls Chess Tournament at Coconino Community College Saturday, Jan. 26. The tournament was an opportunity for girls and women across northern Arizona to test their chess skills and learn about the importance of women and minorities being involved in the career fields of Science, Technology, Engineering and Math (STEM). 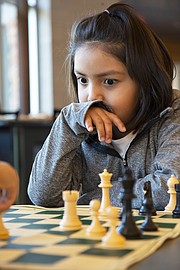 “This is the only girls tournament we have all year,” said Bill Cheney, director of the Northern Arizona Chess Center. “We want to encourage our girls in STEM fields, to show them they can do it.”

CCC President Colleen Smith, gave an opening welcome to start the event. She shared with players and families how much she admired them for spending their Saturday participating in the tournament. She also said that the skills they are developing by playing chess will help them be successful in their education and in all different careers.

In addition to the tournament, the players and their families participated in several STEM-related activities, like challenging one another to who could make the most effective catapult and who could build the tallest tower out of sticks and marshmallows. Lowell Observatory also was on hand with the “Cosmic Cart” to show scientific concepts about the planets.

“Chess is considered to be the ultimate sport of the mind, and in this age of mobile phones, apps and automation, it’s refreshing to offer students an opportunity to focus on a task, strategize and interact with their fellow chess opponents throughout the match,” said CCC Associate Provost Dr. Gonzalo Perez. “These skills prove vital when pursuing studies in the STEM fields. The coursework is rigorous and requires students to spend additional time formulating their ideas and thoughts.”

During the event, the players were split into five categories: Kindergarten through first grade; second through third grade; fourth through fifth grade; sixth through 12th grade; and adult. The players went through four rounds before winners in each category were announced and awards handed out.

“We [had] some grandmothers playing,” Cheney said, smiling.

Nez said she became interested in chess in third grade because her sister played chess. Although she said her seriousness about the sport was “so-so,” she carried with her a playbook and logged each move she made during her games.

As for her future, Nez said, “I want to be an anesthesiologist,” adding that she’s always been good at math and science.

School mate Brianna Altisi eighth grade, said of her introduction to chess, “I wanted to try something new.”

She added that she appreciates the focus the game creates.

“It feels like you’re in the moment,” Altisi said.

Altisi’s father, Benjamin, said, “It’s an opportunity for them to learn and accomplish something and what it is to be in a competition and strategizing.”

Of his daughter’s competitive spirit, he said, “I’m proud of her.”

He also said that he tries to push all of his children toward the sciences and math because the future will require those skills.

“I won,” she said, shyly, adding that she likes practicing.

Her father, Rick Neztsosie, the chess coach at the school, said, “The sooner they start, the better they are later on.”