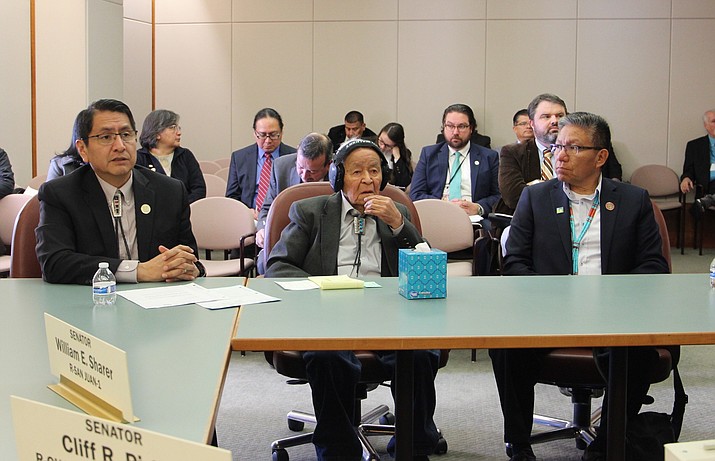 Navajo Nation President Jonathan Nez (left) testifies before the New Mexico Senate Indian and Cultural Affairs Committee Jan. 31 in support of Senate Bill 365 which seeks $1 million from the state of New Mexico in helping to fund a Navajo Code Talker Museum and Veterans Center. (Photo/courtesy of the Office of the President and Vice President)

SANTA FE, N.M. — Navajo Nation President Jonathan Nez was joined by Vice President Myron Lizer Jan. 31, as he provided testimony before the New Mexico Senate Indian and Cultural Affairs Committee in support of Senate Bill 365 sponsored by State Sen. John Pinto (D-Dist. 3), which seeks an appropriation of $1 million from the state to assist with the design and construction of a Navajo Code Talker Museum and Veterans Center in the state of New Mexico.

“The Navajo Code Talkers served courageously in World War II in defense of the United States. It is only right that we honor and support them through this appropriation. Many of our Code Talkers have passed on, and it is important that this museum and veterans center be constructed to honor their memory,” Nez said.

He added that constructing a museum would inspire hope in many people by sharing and displaying the legacy of the Navajo Code Talkers and teaching the youth about the history of their contributions to the entire country.

Honorable Pernell Halona and Honorable Daniel Tso were also in attendance and spoke in support of the bill on behalf of the 24th Navajo Nation Council.

“We respectfully ask for your support of S.B. 365 and we thank Honorable John Pinto, a Navajo Code Talker, for introducing the bill,” states the joint letter.

The Senate Indian and Cultural Affairs Committee issued a do pass recommendation by a vote of 5-0 at the end of the testimony. Senate Bill 365 will also require consideration by the full House and Senate.