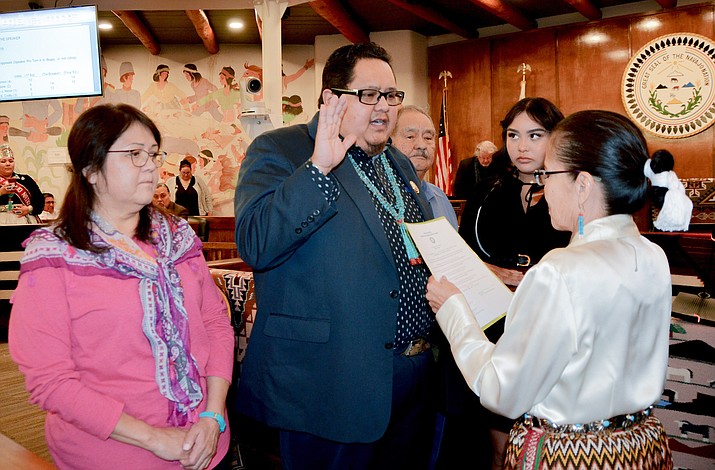 Navajo Nation Chief Justice JoAnn Jayne administers the oath of office to Speaker Seth Damon at the Navajo Nation Council Chambers Jan. 28 in Window Rock, Arizona. (Photo/Courtesy of the Office of the Speaker) 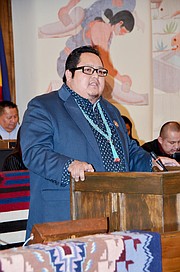 Council Delegate Seth Damon speaks to his colleagues at the Navajo Nation Council Chambers Jan. 28 in Window Rock, Arizona. (Photo/Courtesy of the Office of the Speaker)

“To my colleagues on the 24th Navajo Nation Council, I extend my gratitude for your support and having the confidence in me to lead our Council for the next two years. We have a lot of work ahead of us and I look forward to working with each of you as we continue to work for our Navajo people,” Damon said.

He added that during his term as Speaker Pro Tem, he had initiated work on issues at the state and federal level. Damon called for work sessions between Navajo leadership to begin addressing immediate priorities such as the Navajo Generating Station (NGS), equality of impact aid benefits for Navajo students in public schools, and funding for veterans services and housing.

“We need to continue this strong momentum in addressing these issues that face our Navajo citizens, and I cannot stress enough that only through a unified effort, we will make extraordinary headway in developing solutions for our Navajo communities. I would like to thank President Jonathan Nez and Vice President Myron Lizer for attending the work sessions and continuing those important conversations with Council,” said Damon. “And as the youngest speaker ever selected, I look forward to working with the youngest Navajo Nation president ever elected.”

In attendance during his oath of office was Damon’s family. He expressed heartfelt thanks to his grandparents Charles II and Patricia Damon, his mother Cheron Watchman and his daughter Mikayla Shaye Damon. Charles Damon, II previously served three terms as a council delegate during the 20th, 21st, and 22nd Navajo Nation Council, representing the same communities as Damon.

“I would like to thank my family for always supporting me and always being there to guide me, especially my grandfather former delegate Charles Damon, II,” Damon said. “I also want to commend my colleagues Council Delegates Amber Kanazbah Crotty, Jamie Henio, and Edmund Yazzie for taking on the challenge of running for speaker. I feel honored to be serving with you all and I believe we can continue to push the priorities of council forward together.”