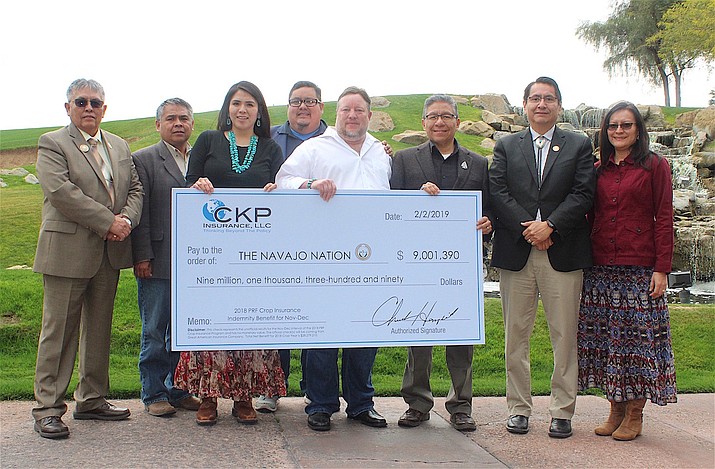 To date, the Navajo Nation has received approximately $45 million overall from its initial investment.

The Navajo Nation Department of Agriculture applied for the insurance coverage through the U.S. Department of Agriculture’s Pasture, Rangeland, Forage Insurance Program. In 2016, the 23rd Navajo Nation Council adopted the Síhasin Fund Pasture Rangeland and Forage Expenditure Plan, which reserved $20 million from the Nation’s Síhasin Fund for insurance premiums to the USDA through CKP Insurance, LLC.

“We are very grateful for the moisture that our lands continue to receive, but we are also thankful that this investment offers great opportunities for agricultural production, land management, farming and irrigation, grazing lands, drought contingency planning, and other initiatives that will benefit our communities,” Nez said.

Damon thanked the previous 23rd Navajo Nation Council for having the foresight to insure the Navajo Nation during periods of time that the Navajo Nation receives little to no rainfall resulting in drought conditions. He added that the current Council will work hard to implement projects that benefit many communities and people.

In addition to the $9 million, the Nation also received $17 million in February and $1 million in July 2018. The Department of Agriculture has since developed a listing of agricultural projects that would benefit irrigation systems, windmills, livestock improvements, drought contingency plans, and others.

“We see the potential of the funding that’s coming from this initiative. We are thankful to previous leaders for laying the foundation and now it’s in our hands to work together to move these projects forward,” Lizer said.

Council Delegate Charlaine Tso said she intends to advocate for funding for projects in the Navajo Utah chapters that she represents including Mexican Water, Aneth, Teecnospos, Tółikan and Red Mesa.