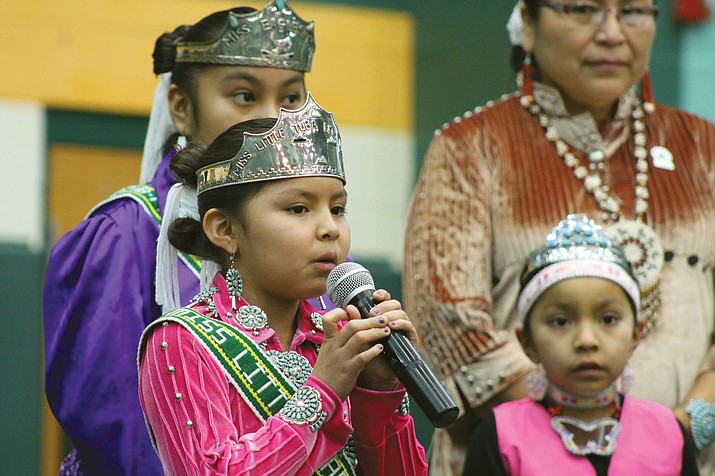 Delma Glasgow, federal projects director, explained this year’s symposium focused on the wellness of families, students and staff. She hopes attendees will in-turn use what they have learned to promote a greater emphasis of language and culture for wellness and healthy choices at home and school. The goal is to empower students to think about their futures, plan, set goals and to strengthen their identities so they can face their challenges.

“We want [students] to know that there are people [out] there that they can count on,” said Glasgow referring to challenges that students may face. “Students have their families, they have their strength and their culture.”

Glasgow is doing her part to help students recognize the importance of their language and culture, and to learn how to fall back on it for a source of strength.

Saraphina To’ahani-Adson, school board member, said in order for students to have strength, they must have a support system. She explained teachers have the power to make a positive impact on students and they need to realize how much of an impact they have. She encouraged teachers and staff to establish bonds with their students.

“You’re their support system, listen to them and get to know them,” she said to the teachers, staff and family members in attendance.

With culture as the main theme, Theresa Hatathlie, human resources director, spoke about how culture exists in many forms — in the home, at school, socially, amongst friends and many other places.

Hatathlie made reference to the school district as a culture and said “there’s a sense of familiarity, a sense of loyalty and a sense of family.” She also made reference to the school district’s mission of being “unified in culture, technology and its commitment to education” and that “every stakeholder is prepared to achieve a lifetime of personal, cultural, civic excellence and to enrich the community.”

“What is culture?” she asked. “It is the customary beliefs, social forms and material traits of a racial, religious or social group. Culture is what you make it and culture changes with time.”

An afternoon session featured Navajo entertainer Radmilla Cody and comedians James and Ernie. Cody spoke about making choices with partners, identifying unhealthy situations, how to get help and the strength of k’é (kinship). James and Ernie spoke about ways to be strong in language and culture, family support, setting goals, decision-making, reaching dreams, overcoming substance abuse and being strong.

Glasgow said the presenters were selected based on their varying presentations about culture and their appeal to a younger audience. She said the line-up of presenters ranged from a forensic computer expert, to a business owner, to a law student and a Diné College professor.