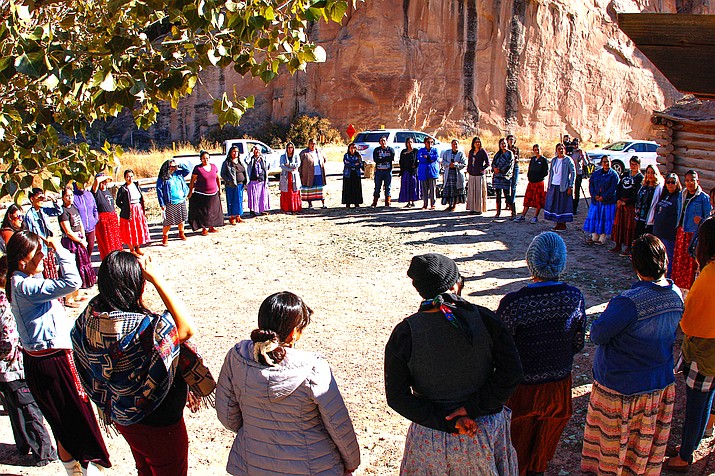 Participants gather at the end of the day at an indigenous doula workshop in Window Rock Oct. 24. (Photo/Delia Johnson,Cronkite News)

WINDOW ROCK, Ariz. — As the sun begins to set on a blustery fall day, the rugged buttes of Navajoland glow red in the soft light and swift gusts spiral dust through the air.

About 40 women, most draped in traditional dress, stand in a circle as Melissa Brown, an indigenous midwife, asks the group to reflect on the day just ending — and the mission still ahead.

“We have talked about being safe here. That is our goal,” she tells them. “We’re going to cry, and we’re going to laugh. And that’s OK.”

One by one, the women share a word that best captures how they feel: Happy. Safe. Joyful. Supported. Sovereign. Brave. Then one sings a hymn in her native tongue.

These women have come to the Navajo reservation to be trained as doulas, aides who have no formal medical background but provide guidance for pregnant women up to and through labor, and sometimes beyond.

They’re here in Window Rock, capital of the Navajo Nation, to learn how to help their own, but also to help confront a tragedy plaguing women in Indian Country and across the United States.

Too many women are dying due to complications from pregnancy and childbirth — deaths that should be preventable with the right intervention and care.

“My first birth that I had when I was a teenage mother was very traumatic,” said Brown, who trains indigenous women as midwives and doulas across the U.S. and Canada. “I didn’t understand how my body worked … how labor and delivery worked. I was very scared, and I didn’t have much support.”

Nicolle Gonzales, a Navajo nurse midwife and the founder and executive director of Changing Woman Initiative, poses for a photo at an indigenous doula training in Window Rock, Arizona, on Thursday, Oct. 24, 2019. She believes it’s important to have a safe space for Native women to talk about the health problems they face. “The things that women experience, we don’t always talk about,” she said. “For me, holding a space and creating a space allows women to have those conversations, but also to heal and to build collaboration and support beyond this training.” (Photo by Delia Johnson/Cronkite News)

It’s a grim statistic, and one that’s often recounted: American women are more likely to die of childbirth or pregnancy-related causes than other women in the developed world.

And although recent investigations have drawn the attention of Congress and put a national spotlight on the issue — especially among black women — Native Americans often are left out of the conversation.

American Indian women are more than twice as likely to die from pregnancy-related causes than white women and lag behind only black women as those most at risk, according to federal statistics.

As many as 60 percent of these deaths are preventable. Nevertheless, about 700 women in America die each year due to complications of pregnancy —and for every death, there are many more women at risk.

The CDC defines a pregnancy-related death as the death of a woman while pregnant, or within one year after pregnancy, from any cause related to or aggravated by the pregnancy or its management, but not from accidental or incidental causes.

“If you look at the timing of the death, it’s actually a small proportion of them (20 percent) that are happening around the day of delivery,” said Dr. David Goodman, co-author of a CDC study on racial disparities in maternal mortality.

When searching for ways to prevent these deaths, Goodman said, “It’s not just what could have been done in that hospital at that time. It takes into consideration what is happening in the community in which that patient lived that may have contributed, and what is happening within systems of care.”

For American Indian women, hemorrhage and hypertensive disorders of pregnancy are among the biggest contributors to these deaths, according to the CDC. In addition, lack of access to proper health care particularly affects American Indian and Alaska Native women.

Ramona Antone-Nez, senior epidemiologist at the Navajo Epidemiology Center in Window Rock, specializes in data collection and works to identify health priorities and concerns within the Navajo Nation.

She notes that the reservation — the nation’s largest, spanning more than 25,000 square miles across Arizona, Utah and New Mexico — typifies some of those accessibility issues that can hamper a woman’s care.

“For the majority of our population, the hospital isn’t just around the corner, just around the block. … A lot of our care takes probably an hour or so just to get to,” Antone-Nez said, adding that a lack of access to specialized care for high-risk pregnancies is another problem.

As a result, many women may miss screenings, prenatal checkups and other appointments at which early problems might be identified.

Nicolle Gonzales is a nurse midwife and the founder and executive director of Changing Woman Initiative in Santa Fe, New Mexico. The group provides care for pregnant Native women and organized the October doula workshop in Window Rock.

Gonzales, who is Navajo, said women should have 10 to 12 prenatal visits before delivery, but indigenous women are lucky to have half that many.

“That makes it difficult to identify health problems like diabetes and hypertension and obesity, or a baby that’s not growing well in the uterus,” she said. “So there’s a lot of missed opportunities to screen for things that could come up in pregnancy.”

Congress and numerous state legislatures have taken steps recently to address these deaths.

In December 2018, President Donald Trump signed the Preventing Maternal Deaths Act, authorizing the CDC to help support maternal mortality review committees established by states and tribes to collect more data about what’s happening and identify possible solutions. A first round of grant money was awarded in August to 25 states, including more than $2 million over five years to the Arizona Department of Health Services

“For pregnant women in rural districts … they often have to spend hours on the road and cross state lines to attend the necessary prenatal appointments,” Torres Small said in announcing the bill

But even in communities where accessibility is less of an issue, the approaches of Western medicine often don’t align with the values and practices of Native American culture.

Brown, the midwife, said this alone can prevent women from asking questions and seeking the necessary support to better understand pregnancy and labor.

“We’re bringing nonindigenous people who don’t have that lived experience into communities and … delivering health education in a way that doesn’t make a lot of sense to people in the community,” Brown said. “Something needs to change, not only here but in other indigenous communities. And I think that’s why … you see this big resurgence with indigenous reproductive justice work and indigenous birth work.”