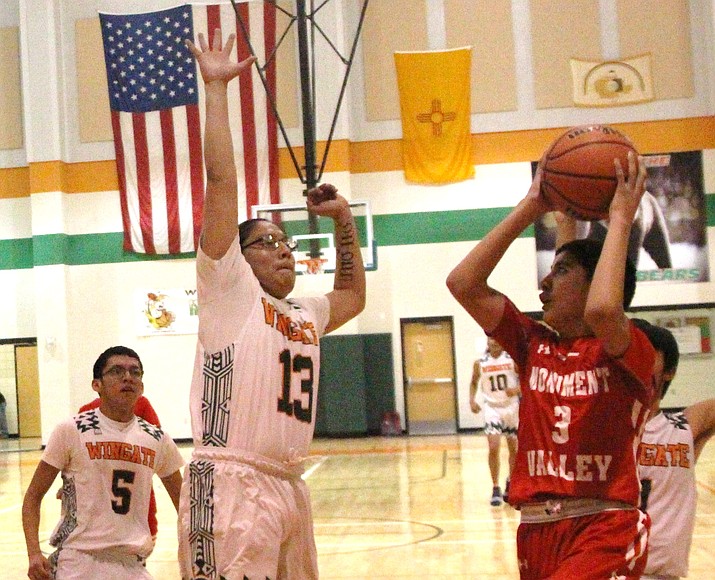 The Lady Bears of Wingate (2-5) defended home court with a 48 to 35 win, over the Lady Mustangs of Monument Valley.

“We only have three starter returning from last season and were still learning,” Mustang coach Richard Beverly said, in his first season with the Mustangs. “We’re gonna play defense — by applying a lot pressure, this will create turnovers, turnovers lead to easy scores.”

“Were still looking for our first win,” Wingate Bears mentor Al Martinez said. “We will give them (Mustangs) a good fundamentally played game.”

Pressure defenses in the first quarter caused a lot of miscues for the host Bears, the Mustangs quickly turn them into points. Dahntay Dugi started the rally with three straight scores, midway through the opening quarter and a 23 to 3 early lead.

The Bears responded with a 7 to 6 run, fueled by Kevine Belone’s baskets and team members’ four trips to the charity stripe.

Normally, when a team applies full or half court pressure, they tend to reach a lot and are called for fouls.

When the quarter concluded, the Mustangs had a 31 to 10 advantage.

In the second period, the Bears had frequent opportunities to score from the free throw line, but they were only able to connect, on 7 of 14 attempts. Meanwhile, the Mustangs turn a 12 to 7 run into a 16 point lead at intermission, 43 to 27.

A 25-point third quarter, fueled by points off turnovers, only increased the lead for the visiting Mustangs as they took a 68 to 33 point lead into the final frame.

With the Mustang starters in foul trouble, caused by being over-assertive, riding the bench most of the third quarter, coach Beverly used his non-starters and gave some valuable playing time for the rest of the game.

In the final quarter, both teams cleared their benches. Monument Valley outscored Wingate bench, 13 to 11, leading to a final score of 81 to 44, a win for the Mustangs of Kayenta, Arizona.

After the game, Monument Valley coach Beverly said, “We pressed a lot, we worked on several defensive looks, that turn into points, the second team had a good playing-time opportunists, good win.”

“Tonight we played a highly skilled team — well coached team,” Wingate Coach Martinez said at the conclusion of the game, “The kids are working hard, were got a ways to go, we will get better — we;re on going to keep working on basketball fundamentals — we are looking forward, to the next game.”

“We like to play together, control the ball and have fun,” said Larenson Whitehair, head coach of the Wingate Lady Bears. “I am fully confident with the girls — they will play good.”

Bears Post Tommianeka Curley quickly scored in the paint and seconds later scored again with an assist by Octivia Long, and the Lady Bears were off to the races. They (Bears) mounted a 13 to 3 run and lead with half of the opening quarter to go.

The Lady Mustangs behind the scoring of Alyanna Nash and Angel Holiday produce a 5 to 0 run to close the quarter, still trailing 13 to 8.

The Mustangs created stops and ‘quit turning the ball over’ and outscored the Lady Bears, 15 to 14, to cut into the lead, which now stood at 27 to 23 at intermission.

It was all Long and the Lady Bears in the third quarter, as they combined for 11 points, while holding the Lady Mustangs to four points, the Bears led 38 to 27, moving into the final quarter.

A 10- point quarter for the Lady Bears and missed free throws by the Lady Mustangs, (eight of 15 attempts), led to the final score in the Bears favor, 48 to 35.

“We made big shots, we’re are a good shooting team, a good win for us,” said Larenson Whitehair, the Lady Bears head coach.

Wingate’s Jewels Leslie ‘s 15 points, and 11 points by Liyah Yazzie and 10 points by Octivia Long, led to a victory for the Bears.

The Monument Valley Mustangs were led with a team high 12 points by Angel Holiday.