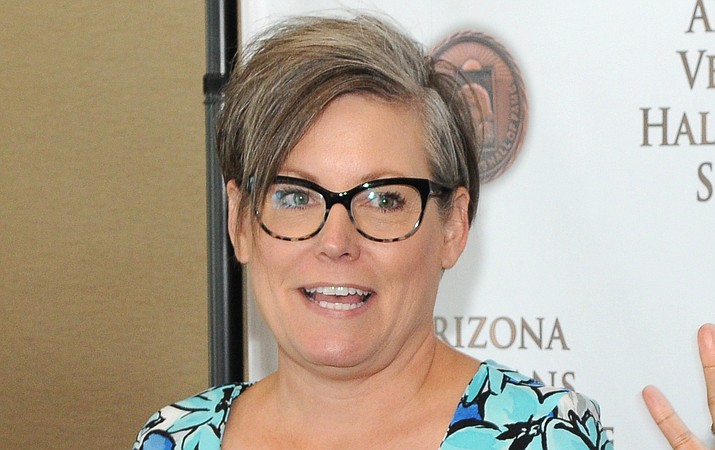 Arizona Secretary of State Katie Hobbs agreed to allow voters who forgot to sign early ballot envelopes an opportunity to sign within five days after the election. (Photo/Howard Fischer)

PHOENIX — The Navajo Nation is threatening a new lawsuit against the state over changes demanded by Attorney General Mark Brnovich to a proposed election procedures manual.

In a letter obtained by Capitol Media Services, Doreen McPaul, attorney general for the tribe, told the Attorney General’s Office that Secretary of State Katie Hobbs had agreed to allow people who forgot to sign their early ballot envelopes an opportunity to “cure’’ the defect, coming in to sign the envelopes up to five days after the election.

That would ensure that the votes are counted.

More to the point, McPaul noted, that deal ended a 2018 lawsuit filed by the Navajo Nation against the state and several counties charging that election practices illegally discriminated against tribal members and kept them from having their votes counted. Hobbs then put the terms of that deal into the latest version of the state Elections Manual.

But Brnovich is objecting, saying there is no legal authority for her to do that.

What makes Brnovich’s protest crucial is that the revisions can only take place if and only when he agrees to it. And an aide to Brnovich said he will provide his approval only if the manual removes the language about voters being able to cure their ballots after Election Day.

McPaul, in her letter, warned of legal implications.

“By excluding this language ... the attorney general will be teeing up additional litigation,’’ she wrote, creating a situation in which some counties would allow voters to “cure’’ their votes and some would not.

And McPaul said that, whatever Brnovich thinks of state law, federal law mandates that voters have an opportunity to cure their ballots.

At the heart of the legal fight is the 2018 lawsuit saying that election practices by the state and Coconino, Apache and Navajo counties make it difficult, if not impossible, for reservation residents to cast early ballots. That includes the failure to provide instructions in the native language on how to fill them out and that the envelopes must be signed and dated.

The lawsuit said the problem was complicated by the fact that some counties refused to give residents time after the election to fix early ballots where the envelope was not signed or a signature did not match.

Earlier this year, responding to a separate lawsuit, the Legislature approved a measure requiring county recorders to try to contact people if the signatures on their returned early ballots did not match signatures on file. That law gives people up to five business days to come in and fix the problem.

But Hobbs and the counties, in settling the lawsuit, also agreed to apply the same provision in cases where early ballots turned up with no signature at all. And Hobbs inserted that language into the draft Elections Manual which is supposed to be the procedure followed in all 15 counties.

Brnovich, for his part, contends Hobbs in essence was illegally making law and demanded the provision be stripped. Hobbs is expected to go along.

It is that change that McPaul said will land the state back in court.

“The curing of early ballots does not violate any state or federal laws,’’ she wrote, disagreeing with Brnovich’s conclusion. “Not allowing curing, however, violates federal law.’’

The bottom line, McPaul said, is that the deal that settled the Navajo Nation lawsuit clearly anticipated — and required — that the state allow people to go to county election offices and sign their ballot envelopes.

“All parties agreed that voters deserve appropriate due process and equal protection when voting,’’ she wrote to Brnovich’s office. Without a single standard in the Elections Manual, McPaul said, there will be inconsistencies.

“By only allowing some voters an opportunity to cure and not others, the attorney general is advocating a policy to deny voters equal protection and due process in violation of the Fourteenth Amendment,’’ McPaul said.

Brnovich isn’t the only one going after Hobbs over the Elections Manual.

Earlier this week, Sen. Michelle Ugenti-Rita, R-Scottsdale, introduced legislation to go even farther than the changes Brnovich wants. Her SB 1032 says if a signature is missing from an early ballot envelope, “the county recorder or other officer in charge of elections shall not allow an elector to add the elector’s signature and the ballot shall not be tabulated,’’ even if the error is found before Election Day.

“This bill would affect people who clearly expressed an intent to vote but may have simply forgotten to sign the ballot envelope,’’ Hebert said. “It’s a completely unnecessary barrier to voting.’’

But Pima County Recorder F. Ann Rodriguez, a Democrat, is siding with Brnovich and Ugenti-Rita, both Republicans, and against fellow Democrat Hobbs. In a letter to Brnovich and Gov. Doug Ducey obtained by Capitol Media Services, she said allowing voters to cure unsigned ballots goes beyond what is permitted under state law — and contrary to precedent.

“No county in Arizona has allowed a voter to come in after Election Day to place their signature on an incomplete early ballot affidavit,’’ she wrote.