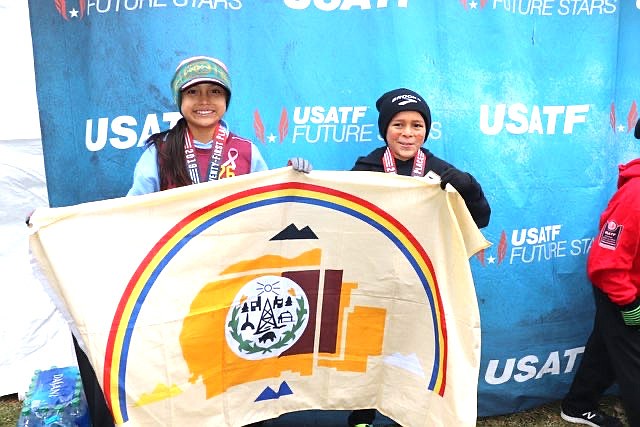 Layla Curtis earned All American status for her 21st place finish in the 8 and under girls race at the USATF National Junior Olympic National National Cross Country Championship. (Submitted photo)

On a day where wind chills hung around 10 degrees and the ground remained frozen, Dine’ and Pueblo runners competed against the best youth from across the country.

“It was great to show our youth how hard work pays off, how their fast legs allowed them to see a new part of the world,” said Stacie Hurley (Dine’) from Running Medicine. Her group scheduled a visit with the University of Wisconsin Center for Native American Center for Health Professions the day before the race, allowing their youth and families to explore what it is like to be a healer.

Of the approximately 25 Native American runners, eight of these runners earned All-American status for top 25 finishes in their age groups. The Walatowa Running Club earned a top 3 team finish as well (8 and Under girls race).

Layla Curtis from Bodaway Gap was all smiles after earning All-American status for her 21st place finish in the 8 and Under girls race.

“Without God, friends and family this would not have been possible. Thank you for your love and support,” Layla said.

She proudly dressed traditionally for the opening ceremony of the event, and she took pictures with a Navajo Nation flag after the race.

Another strong finish came in the next race of the day, the 8 and Under boys race where two youth — Jaydon Riley and Bah’hozhooni Fleg placed in the top 25.

“I was proud to represent for the Navajo Nation today, to show our strong running tradition. I was running today for my family,” commented Bah’Hozhooni Fleg of Running Medicine who placed 3rd overall in the 8 and Under Boys division.