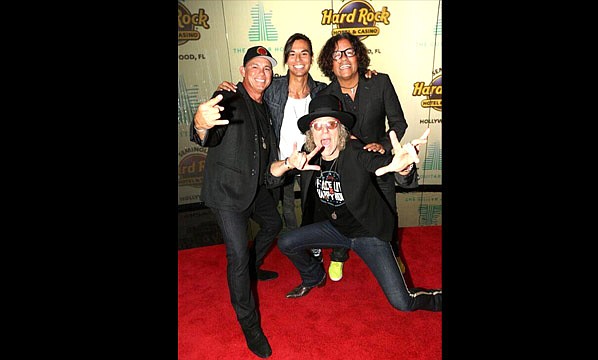 HOLLYWOOD, Fla. — The Seminole Tribe in Florida has pulled off one of the largest economic development projects in American history.

In 2006, the Seminole acquired Hard Rock for about $1 billion.

While the amount invested in this project is eye-opening, the hotel project with the giant guitar is also overwhelming to see as it dwarfs the other hotels and buildings around it. The huge guitar, on the outside of the building, shoots laser lights into space and changes colors.

“I saw the renderings. It was a plastic mini-version. Now it’s so big that the pictures and drawings do not do it justice,” he said. “It’s great because it’s not just a giant statue of some man who thinks he’s a bad ass. It’s a guitar that represents rock and roll. This is a global monument to rock and roll.This is welcome in Indian country and shows the spirit of rock and roll.”

Salas, who used to surf and skateboard, said the guitar hotel has a warrior feel to it.

“When you see it, it doesn’t look possible. It looks like one of the miracles of the world,” he said. “It looks like it’s from a Godzilla movie.”

Salas, who is Apache, flew into the star studded event on a jet so he had a good view of the guitar hotel.

“It looked so gigantic. There is nothing like it on the planet. The cool part is that it represents music and not power,” he said.

This project will be known worldwide soon, as Hard Rock has the naming rights on the Miami Dolphins Stadium, which will host the Super Bowl in 2020.

“Nobody has anything like this,” Salas said. “Everybody was there (at the grand opening).”

Johnny Depp, Joe Perry from Aerosmith, Morgan Freeman, Big Kenny from the duo Big and Rich and Julio Inglesias Jr. were among the stars. There are 12 restaurants in the building, but the food for the grand opening included lobster rolls, beef tenderloin, roasted pig and a dessert bar.

“It was hard to eat because I was so busy talking,” Salas said.

Salas, who has been friends with the Seminole people for years, said he also appreciates this project because the Seminole share all the money with the tribal members and many are employed by the guitar hotel project.

“The Seminole Tribe is doing well with everything from education to medical coverage,” he said.

“The Seminole are doing business in a big business world, and that’s beautiful to see,” he said.

Salas said the guitar hotel project is important because it is something that is global.

“This is being talked about all over the planet because of this giant guitar,” he said.

Salas said Native Americans have a hard time getting positive press, but this is a positive project that is now the talk of the hotel industry. He said there are no drunks or anyone on welfare here.

“They are dominating and doing it the right way,” he said.

Years ago, Salas’ music brought him to Florida where he became friends with Seminoles.

More information is available at www.seminolehardrock.com