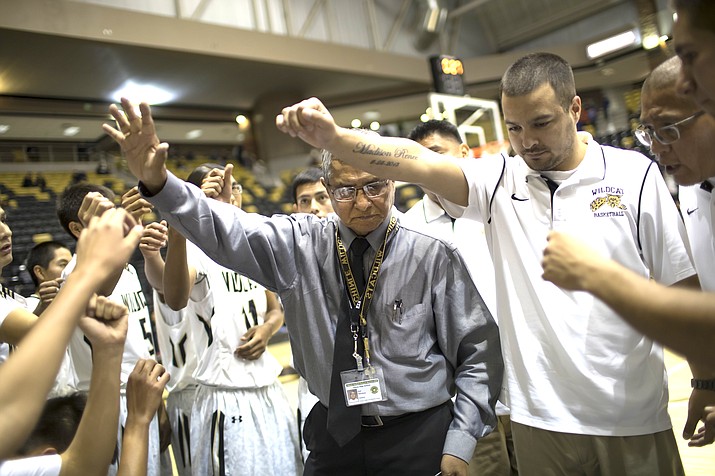 FLAGSTAFF, Ariz. — Michael Powell, author of ‘Canyon Dreams: A Basketball Season on the Navajo Nation,’ acknowledges he doesn’t need to tell Navajo students about the realities of life on the reservation or the struggles kids face in deciding their futures — whether to stay on the reservation or leave.

But ‘Canyon Dreams’ does delve into the realities kids faced during the 2017-2018 basketball season and explores why Chinle, a town of about 4,500, packs the Wildcats gymnasium full of fans and family, who sometimes travel vast distances across the reservation to watch the games.

One of the reasons is known as Rez ball, a particular brand of basketball which involves running the full length of the court, up and down, full speed, non-stop. 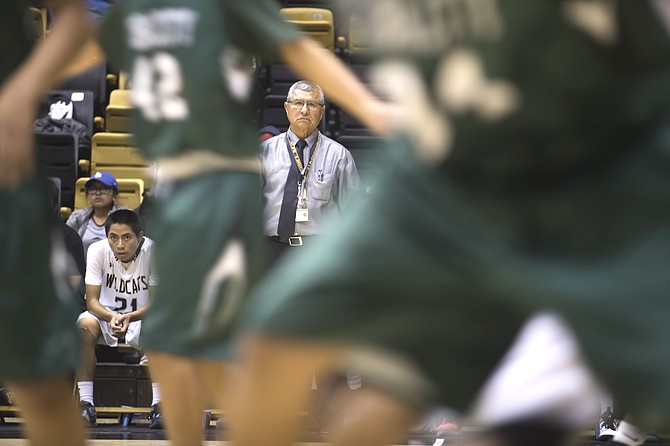 Raul Mendoza rarely stomps, and yet more rarely yells during a game. But his eyes, those of a raptor, miss little. (Photo by Nathaniel Brooks)

“At its best, it’s a beautiful style of basketball...,” Powell said. “It’s a lot of fun to watch because it’s so fast. There’s such an emphasis on passing. Played badly, it becomes chaotic, but when it’s played well, it’s a lot of fun.”

Embedded with the team, Powell got to know much more about the players and the coaches than just simply basketball. He admits that for much of the country, who know little about the Navajo reservation, or the border towns surrounding it, it’s like he is talking about a different world.

They have no idea that families grow up without electricity or running water, or the cycles of poverty and alcoholism that are everyday life to some on the reservation.

Given that, Powell said he was most struck by the kids intense sense of belonging, even with all the social and economic hardships they face.

“I think that is one of the things that really interested me,” Powell said. “It accentuates the challenge that young teenagers have as they approach the end of high school. In this place they are surrounded by their clans, cousins, aunties, uncles and they ask, ‘What do I do? If I do go to Phoenix, Tucson, Vegas, LA can I make it out there?”

It was a question that Powell found a lot of the kids asking and struggling with as he followed them around for the basketball season.

Powell says Mendoza is a good coach, maybe not brilliant with some unbelievable offense, but with a grasp of fundamentals. But, more importantly, Mendoza has what he calls head work and he has lived a lot of what the kids go through.

“Mendoza has coached on and around the Navajo reservation his entire career,” Powell said. “He talks about a lot of this with the kids. I could tell, particularly at first, they’re kind of wondering, ‘What’s this all about?’ But I do think, there’s a method to what he is doing. My sense is they’re both [Mendoza and Shaun Martin] they are there as coaches, but they are also a counselor.”

Powell recounts talking to one of the players he writes about — the player had already graduated the previous year and he was a bright, thoughtful, introspective guy, who took AP classes.

“He had the brains and the ability to go to a four-year college and he was struggling with that,” Powell said. “There’s a scene in the book where he drives to take his SAT and he sits in the parking lot for twenty minutes and then drives away. He kicks himself a lot about that.”

Again, Powell said he knows this struggle is one the people, particularly the kids, in northern Arizona are familiar with. The fear of failure, but also the fear of success.

Powell said he did find some parallels to other small communities in some of the stories he witnessed, even while those communities were not Native.

“There are a lot of similarities, the fear and some of that stuff,” Powell said. “It did feel to me there was a universality to some of these stories.”

Powell does admit, though, that he hadn’t thought of his book in terms of how people who live on the Navajo Nation would view it.

“I guess the most I could hope for is they feel that is was an accurate representation of their life, history and culture,” Powell said. “I am not a Navajo. I read a ton, talked to all kinds of people from Navajo officials to Medicine Men. I would hope that this registers as accurate and honest to what their experiences are.”

Powell has been a writer at The New York Times since 2007, and a “Sports of The Times” columnist since 2014. Before joining The Times, he worked for The Washington Post from 1996-2006, where he covered the 2000 presidential campaign and last served as New York bureau chief.