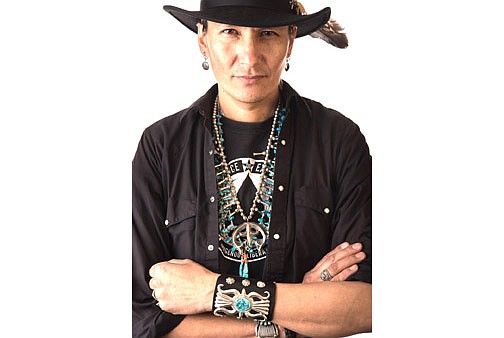 KINŁANI, Ariz. — ‘Oh, we’ve been here before, this world burning, this world burning…’ is the chorus to the last song on Klee Benally’s new acoustic album, ‘The Unsustainable Sessions’ — a song that lingers in your mind long after listening to it.

That song, like the rest of the album, tackles conflicts indigenous people face today.

“I took a break from making music in 2012 when my guitar wasn’t enough to stop bulldozers from desecrating sacred sites,” Benally said. “I was focused on organizing and coordinating actions, then one day I woke up and said, ‘oh yeah, I’m an artist, too.” 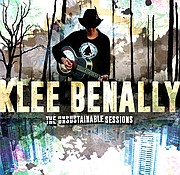 With a raw, gritty voice, sometimes almost a whisper, sometimes more of a challenging tone, Benally in the music on this album examines the struggle to protect indigenous sacred lands, to tear down colonial systems, to fight for justice against injustice and to move people to action.

“So long as we’re fighting for justice, art should help move people into action,” Benally said. “If these songs can be twelve more rocks thrown against despair, that’s what matters.”

Benally didn’t set out to write a concept album. But he did want to continue the life-long conversation he has been involved in musically since he was 10 years old. (His family is the Jones Benally Family) Benally has been in the entertainment industry since he was young, touring and educating people about indigenous issues, including in a band called Blackfire).

This new album continues that conversation. Benally asked his supporters what helps them in times of despair. The answers Benally received set the tone for the whole project

“‘The Unsustainable Sessions,’ came out because I was thinking of everything that went into it…thinking of all the ecological challenges that we face, the social struggles that we’re facing in these times,” Benally said. “There are similar themes…themes have always been about struggle.”

But what happens when that struggle doesn’t yield the results you are fighting for? What happens when snowmaking still happens on a sacred mountain, when police still target the unsheltered, when your people still face discrimination and worse, when there is an ongoing crisis of missing and murdered indigenous women, men, boys and girls?

“I was told by an old AIMster (American Indian Movement) that they don’t call it a struggle for nothing,” Benally said. “There’s a reason they call it a struggle. But with the teachings that I have, especially from my father, he taught me, it’s a spiritual struggle. So the prayers, the ceremonies and the, I think, secret connections that we maintain as healers. Our medicine is something we always carry with us as Diné people.”

Benally said as activists he and others look for problems to fix. But, as healers who carry their medicine with them, they look for opportunities to transform disharmony into harmony.

“I think that’s a part of the responsibility as the Holy Earth Surface People, that’s our full understanding of who we are as Diné people and it sets a different kind of obligation and understanding,” Benally said. “In the past, we had specialized medicine people, or singers, chanters, who carried ceremonies forward. Each and every one of us carry that medicine with us. And so, to me, that’s part of that connection. I always look at music as part of that process of exercising, processing and transforming. And if music, to me, can move somebody, that’s what matters.”

Benally believes the role of any artist is to try to move people toward a space where society as a whole is addressing the social and ecological injustice in a more just, healthy and sustainable way — where people can live their lives in a good way toward the future.

But in that underlying belief is the contradiction for Benally.

While the Diné are supposed to believe that things will get better in old age, that they will live in health and harmony and to seek that, Benally said in dealing with the Peaks issue or helping unsheltered folks, or in addressing police violence, he finds it takes more direct action — that people can’t just hope things are going to get better.

“I have this contention with hope,” Benally said. “A lot of people say, ‘Oh, I just hope it’s going to get better,’ and they sit on their hands and wish things change. I think it’s been said before, hope is a verb. It’s an action word that we need to make sure that if we want things to change, we have to be part of that. We have to be change makers.”

‘The Unsustainable Sessions’ is one of Klee’s ways of doing that. Written and recorded last summer on the platform Patreon, www.patreon.com/kleebenally, a crowd-funding subscription platform to support and grow independent artists. You can download the album here: www.kleebenally.bandcamp.com.

‘Actions are our prayers, when we live our lives, in reverence,’ he whispers and sings in a raw, gritty tone on the first song on the album, ‘Over the Edge/In Reverence.’ The music video for the is here: https://youtu.be/CoxxSr5jfMY

Benally points out that he is not alone as an artist with a message in and around Flagstaff and along the Colorado Plateau — there is Ed Kabotie and Radmilla Cody and lesser known artists too, who are trying to use their art to make good things happen.

“We need more artists like that and more folks taking action and organizing to address these issues,” Benally said. “But all of us can be part of that. If there’s a problem, pick a point, fix it. What are our talents and strengths that we can offer to this?”

Sometimes it is as simple as planting a seed in the ground for future generations to take care of.

Or carrying forward the work of others as he signs about in ‘She Was A Mountain,” a song about women who have just said no to the federal government and their attempt to dictate what they should do.

‘It was the words she didn’t say, she sang the sun down, everyday, into the silence, shouting, and when they came to move her, she was a mountain,’ Benally sings, ‘Oh, Katherine, get your gun, oh, Roberta, sing your song, Oh, Pauline, cut the wire, Oh, Mae start the fire.’

“It’s a very personal song. The first time I played that I couldn’t get through it without tears in my eyes because I was very emotional,” Benally said. “Because the question is, what will bring justice to the legacy of these folks who sacrificed so much, especially when these injustices are still going on? And part of that, to me, is making sure their memories are there and that … we keep this fire going, however we can.”