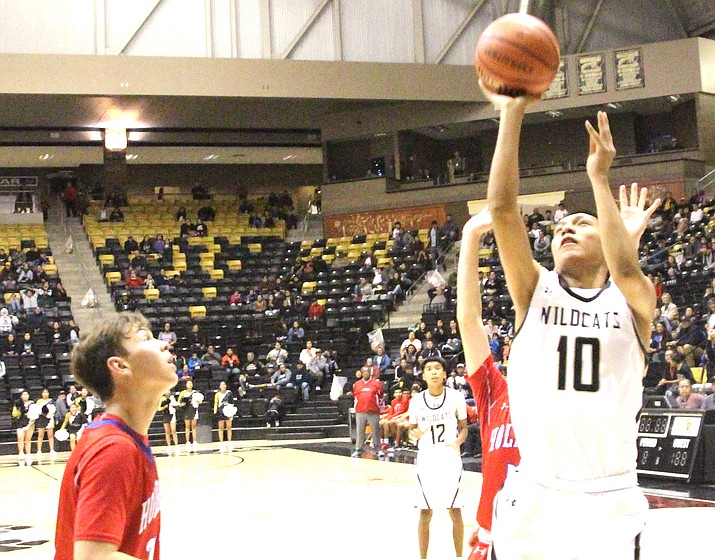 “At this point in time, we are trying to find an identity and getting the them (Wildcats) to play together, offensively and defensively, its early in the season,” he said.

“Tonight, we want to play with intensity and play smarter,” added Holbrook Coach Delmar Johnson. “We want to do what we best, play up tempo and play pressure defense.” 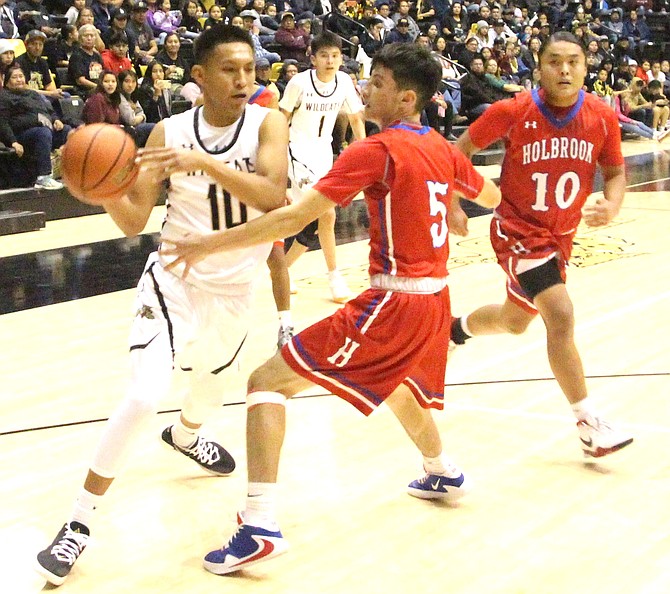 Chinle Wildcats’ Cooper Burbank (10) attempts to pass the ball, around the close defends of Holbrook’s Eric Baldonado (5), during a game held at the Chinle Wildcat Den, in Chinle, Arizona. (Anton Wero/NHO)

The crowd, who anticipated a fast and up tempo game, were not disappointed. The Roadrunners and Wildcats played with full court pressure, play to a 10 all tie, before the Roadrunners went on a 9-0, run. When the dust settled, the Roadrunners led 19 – 14, as the first quarter ended.

Although the Wildcats outscored the Roadrunners 17 – 14, in the second quarter, Holbrook maintained a 33 – 31 edge going into the third quarter.

The visiting Roadrunners and host Wildcats scored 18 points each. Holbrook still held on to a two point advantage, 51 – 49.

Chinle rallied to their first lead of the game when Cooper Burbank drove into the paint, converting a lay in basket. With two minutes left in the game, the Wildcats took it 63 – 58.

Holbrook had several opportunities to win the game in the overtime period but their shots fell short and Chinle claimed a 74 – 67 victory.

“We did a lot of things good tonight, after the second quarter, we made some adjustments,” Mendoza said. “Overall, a great win.”

“Pretty intense and crowd got into it, we kept our composure and kept playing, we stayed in focus that’s a plus on our side,” said Chinle Coach Cooper Burbank. “We had fun tonight.”

“We missed a lot of shots tonight, turnovers and not getting back on defense, led to our loss,” Delmar Johnson, Holbrook head coach said. “Overall I am not disappointed, I give Chinle a lot of credit and tonight was their night.”

Senior Eric Baldonado scored a team high of 23 points for the Roadrunners.

“We are young, but we are up for the challenge,” said Francine McCurtain, Chinle Lady Wildcats coach. “Were communicating and learning new things daily.”

Chinle came out hitting their shots early and lead 11- 8, as the first quarter ended.

The Lady Wildcats continued their quest to win by outscoring the Lady Roadrunner, 9 – 8 and leading 20-16 at the intermission break. 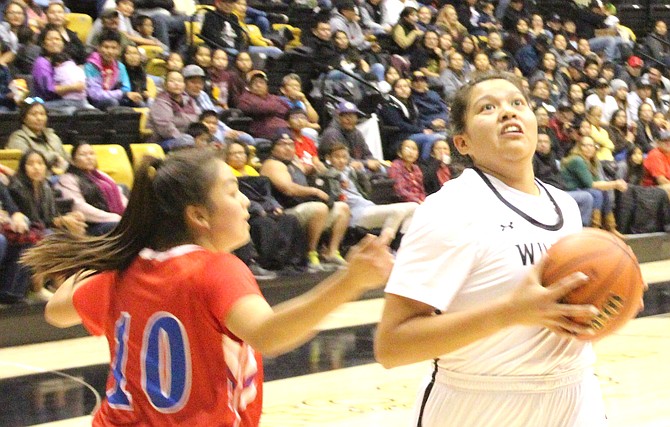 The third frame play by both teams remained steady. The Roadrunners outscored the Lady Scouts, 11 – 8 to cut the Scouts lead to a point, 28 – 27.

The final quarter scoring belonged to the visiting Roadrunners who missed layups and free throws but manage to secure the win. A single point win, 41 – 40.

“Holbrook was ready to play,’ McCurtain said. “We had too many turnovers in the fourth and final quarter, they were hitting their three points and they gain confidence.”

“Missing free throws and open shoots at the end nearly costed us the win, at the end,” Holbrook Coach Greg Perkins said. “Pressuring their guards and hitting some threes worked for us.”

Sam Billie scored the game high of 13 points followed by Mika Joe with 11 points for the winners, the Holbrook Roadrunners.