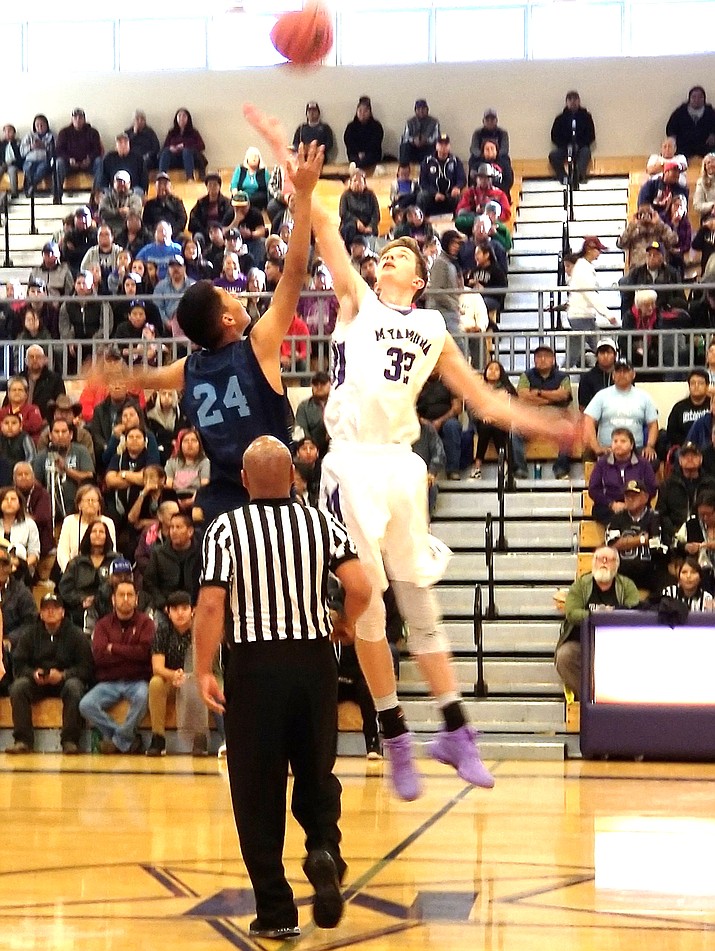 The Scouts defeated the Patriots 45 – 43 and the Lady Scouts were handed another loss to close state rival Lady Patriots 44 – 52.

“We expect our offense and defense to be well balance and run the system,” said Coach Tom Bizardi, who starts his first year at the helm, of the Window Rock Scouts.

“They have a new coach, they can be aggressive,” Reyes Hernandez, head mentor for the Patriots commented of the Scouts. “We have a group of young men who have a lot of skill set. We are going to learn a lot from the game and have fun.”

Jarron Cadman hit a three pointer to start a 9 – 0 run for the Patriots. Derian Long was fouled driving in the paint to open the scoring for Scouts with under two minutes remaining in the opening quarter. Miyamura led as the quarter ended 9 - 3.

After the slow opening quarter, the pace of the game picked up. Cauy Silversmith scored 9 points of his game high 21 points, as the Scouts outscored the Patriots 13 to 8. The Scouts cut into the Patriots lead at intermission 17 to 16.

“I told the boys (Scouts) our defense carried us in the first half, they tested our offense,” Bizardi said. “In the second half, let’s be patient and expect our offense to close out the game.”

Silversmith continued to add fuel to the Scouts’ offensive power with two treys and two scores, driving the paint for 10 points. The team’s buckets for buckets as the Scouts gained an edge and led through the end of the third period. The Scouts then took a two point lead of 31 to 29. The game was knotted three times and the lead changed six times in the quarter.

Silversmith and Adrián Destea took control of the fourth quarter, scoring eight points that were answered by the Patriots’ Cadman, Isiah Begay and Bishop Begay with 14 points, tying the game with two minutes left. After snatching a rebound, Silversmith drove coast to coast and forced a shot that smacked off the rim and was grabed by Destea for a shot off the glass with no time remaining and the win. The final score was 45 – 43.

“It was a very aggressive game,” Bizardi said after the game. “We stayed patient and worked hard on our defense … our team concept is there. We are going to correct ourselves daily and game by game. I have high expectation for this team.”

Silversmith had a game high of 21 points, followed by Destea with 10 points for the Scouts.

“The game was intense, like I expected, they were very aggressive,” said Reyes Hernandez, head coach of the Miyamura Patriots. “We’ve got to be better.”

“Patience,” said Sharon Toadecheenie, coach of the Window Rock Lady Scouts. “Being patient is the key.”

During a pre-game interview, Joshua Dupont with the Miyamura Lady Patriots said the Patriot’s defense is key.

“Our strengths are we have good guards and a complete team,” he said.

Jana Solee, Robbie and Bayla Talkalai combined for 12 points to retake the lead, Bayla added two free throws for the Lady Scouts in first quarter giving the Scouts a 14 – 9 advantage.

Bayla scored 9 of 13 points for the Scouts, in the second quarter, increasing the Scouts’ lead to seven points. The Scouts were able to hold on, 27 to 20, for a half time lead.

Dupont then gathered the Lady Patriots, telling them to finish the play.

“We left too many plays out there, we didn’t finish the plays,” he said.

Miyamura had 6 different team members score 16 points in the third quarter, while holding the Scouts to only eight points and took a one point lead into the final quarter, 36 – 35.

The Lady Scouts were held to eight points in the first four minutes, the Lady Patriots scored four points, then went on an 8-0 run to take control of the game, leading 48 to 43. The Patriots didn’t ease up and finished the game with 4 to 1 run, winning the contest cross state contest 52 to 44.

“(I’m) proud of the team, early on we didn’t finish our plays, and lost control of the game,” Dupont said. “We like to pressure the ball – we didn’t do that in the first half. In the second half we played with aggressive defense and played with more effort — that made a difference. We have a long way to go — we play in a tough district.”

“We’re happy with our efforts, we work hard,” said Sharon Toadecheenie, coach of the Window Rock Lady Scouts. “We will work on being patience and aggressive, during our practice. I have high expectation for our girls, we play in tough 3A north district and I expect our girls to be in the Arizona State Playoffs.”