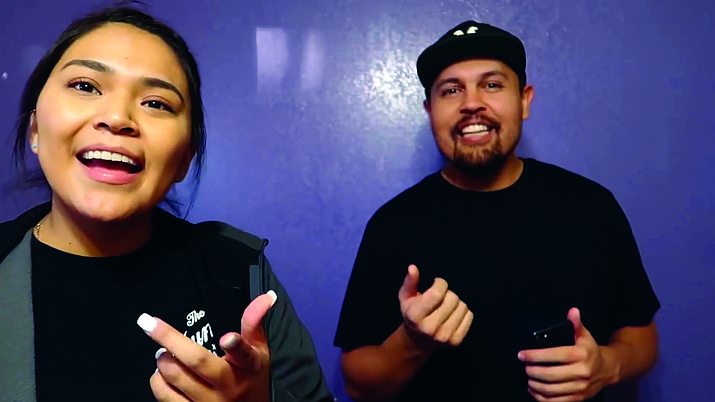 FLAGSTAFF, Ariz. — The popularity of vlogging is a fairly new concept that has emerged on the internet in the last few years. Navajo vloggers Natalie Franklin and Michael Balcerek are just two popular vloggers entertaining a mostly Navajo audience and bring interesting content that has attracted many viewers.

She has been vlogging for two and a half years now and has more than 11,000 YouTube subscribers and has done 86 videos. Vlogging provides her a platform and an opportunity to spread positivity in a society that often focuses on the negative. Her vlogs are happy, upbeat and entice you to watch more.

“That is kind of like my personality,” she said in response to her vlogs being labeled upbeat. “It makes me super happy. That is what a lot of people tell me and that inspires me to be more upbeat. I just like that I have that effect on people.”

Natalie Franklin poses on a rock ledge overseeing the Little Colorado River near Page, Ariz. She often does travel vlogs of areas near her home that are often overlooked. (Submitted photo)

Franklin wants to help change the dialogue and stigma of Native American communities. Most times, only the negative news and the negative aspects of reservation life are publicized, she said. She wants to offer her part through her positive vlogs.

“I know there are so many positive things happening, that is what I’m trying to tell people,” she said. “It is not just all dirt and nothing here. There are people doing a lot of amazing things; there are kids who are representing their town and doing many great things.”

Franklin said she was first inspired to vlog after being an avid viewer of traveling vlogs where people documented places they have visited around the world. This provided her the idea of promoting her own local area that is often overlooked.

“I thought, ‘Why isn’t anyone showing our reservation?’” she asked. “There are so many great things here like the Grand Canyon, Monument Valley, the Grand Falls — these are all hidden gems that people don’t really know about. So that is what really inspired me to start vlogging.”

Franklin has made several of her own traveling vlogs and said she really enjoys doing them. One of her favorite vlogs was when she hiked up Mount Humphreys near Flagstaff a year and a half ago.

“It was a really fun time and it was one of my very first vlogs that I really put effort into editing and finding cool music for,” she said. “I was really excited to go up to Mount Humphreys… I’ve never been up there... It was a great experience.”

Franklin has made many friends since she started vlogging. She especially likes the opportunity to inspire people and spread positivity. She stays away from current affairs and politics because they can often become heated discussions in her comments section, and she understands everyone has an opinion.

For Michael Balcerek, 29, vlogging allows him to share a glimpse into his life. He has been vlogging for the last year and half. His YouTube channel is “mbnbzb” and he has more than 1,700 subscribers.

“I make YouTube videos about everything and anything about my life,” he said. “I’m just letting people see life through my eyes.”

Balcerek has always had an interest in video work and did video editing when he was in college. After several vlogs, he realized he had an impact on people and so he crafts many of his vlogs to encourage people to reach for their goals no matter the circumstances they may be experiencing.

“[Vlogs] allow people to see a different perspective,” Balcerek said. “Vlogs are going to be a really big thing, not just to our community but to let the world know that Native Americans are here and living a life that most don’t see.”

His students are always interested in his vlogs and often ask when he is releasing the next one. He sees vlogs as a way to educate people as well.

Some of his past vlogs touched upon social and environmental issues such as uranium mines on the Navajo Nation, water issues, school bus issues and issues with students having to get up at 3-4 a.m. just to get to school.

Some of Balcerek’s recent vlogs include “What’s on my iPhone 11?”, where he talks about some of the useful mobile applications that he uses on a daily basis like MyFitnessPal, various photo editing apps, YouTube, Google Music, Snapchat, Instagram and Facebook

His vlog about the Western Navajo Fair garnered more than 4,400 views.

Both Franklin and Balcerek said editing is the biggest challenge they experience in vlogging.

“Editing for me is hard some times,” said Franklin. “I’m always so busy. I have a son, I’m working a lot.”

Between doing things for her 6-year-old son Jacob, she miraculously finds time to edit her videos.

Balcerek experiences the same challenges while caring for his two daughters, working full time and being a coach.

“A lot of people think that vlogging is easy but it is so time-consuming,” he said. “You have to find the time to actually record and edit. That in itself is super, super long.”

“I use any free time, which is not a lot to edit videos, it takes a long, long time,” he said. “That’s why there is only one video a week.”

Balcerek explained it can take two to five hours just to edit a 10 minute video. Despite the tedious work and attention vlogging requires, he still encourages more people to begin vlogging and to tell their stories.

“I encourage people to just pick up a camera, any camera that they have, their cellphone and start vlogging,” he said. “Pick a storyline and vlog about it.”

Franklin said she does not have any big projects coming up, the last big project she had was the Western Navajo Fair vlog which has more than 19,000 views so far.

Balcerek said the next big project he has is documenting his journey for an upcoming marathon in February. He is working on a series of vlogs for the marathon beginning with Day One of marathon training all the way to the day of the marathon.

For now, both vloggers plan to continue telling stories and documenting their lives through videos.