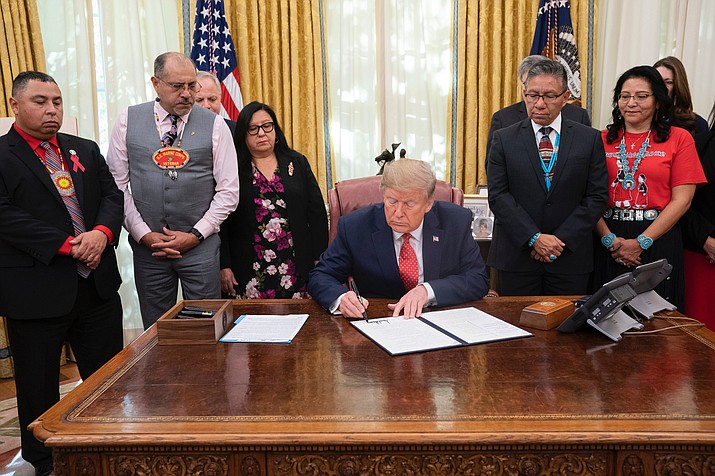 Second Lady Dottie Lizer was on hand, too, in the Oval Office, along with U.S. Attorney Gen. William Barr, U.S. Department of the Interior Secretary David Bernhardt and other tribal leaders for the ceremony.

“This is another step forward for Indigenous nations throughout the country. I commend President Trump and his administ-ration for recognizing the traumatic epidemic of missing and murdered Indigenous relatives,” Lizer said. “Throughout our tribal nations, we hear far too many stories of families, victims and survivors, so we need to keep our sacred women and children safe and protected,” Lizer said.

Lizer also had the honor of providing a prayer in the Oval Office moments prior to the signing of the executive order.

On Nov. 22, Barr announced the Missing and Murdered Indigenous Peoples Initiative, which will invest $1.5 million to hire specialized coordinators within the offices of U.S. attorneys who will be tasked with developing protocols for a more coordinated response to violence against indigenous people.

The executive order will launch “Operation Lady Justice,” a task force led by Barr and Bernhardt to develop an aggressive, government-wide strategy to improve the safety of Native American communities.

The order will also allow tribal and local law enforcement to seek assistance from the FBI and the U.S. Justice Department, which will conduct an in-depth review of federal databases to determine best practices for collecting data on missing and murdered indigenous persons.

“Our Native American people experience violence at a higher rate than any other nationality in the country. The lack of reporting and investigation of missing and murdered indigenous peoples needs to be taken seriously,” Lizer said. “The executive order gives hope to our tribal nations that justice is being sought and that there is a path for healing of our families, victims, and survivors.”

“The issue of missing and murdered Indigenous persons has not only affected families, but it impacts communities. As leaders, we must continue to advocate for safety and justice for Native women and children. Most importantly, we need to address efforts to restore balance, love, and harmony within Native homes and communities,” said Second Lady Lizer.

The murder rate is10 times higher than the national average for American Indian women, with 84 percent experiencing some form of violence during their lifetime. There is still no reliable way of knowing how many Native women go missing each year because the databases that hold statistics of these cases are outdate and the lack of coordination between law enforcement agencies.