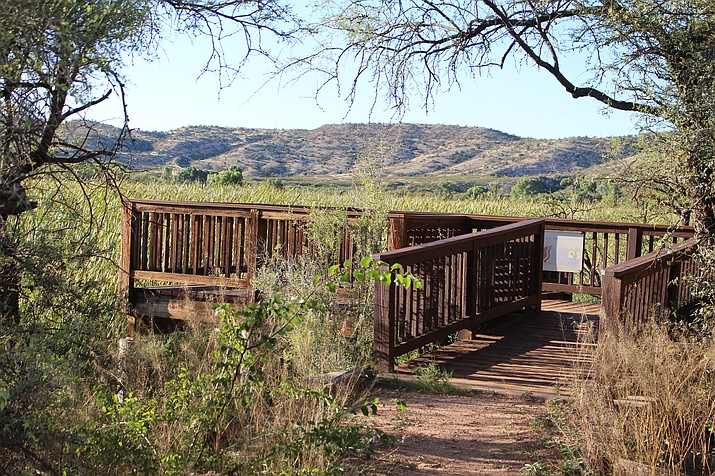 Tavasci Marsh is located in Cottonwood, Arizona. It was used by the Yavapai Apache and Hopi tribes for harvesting. (Stan Bindell/NHO)

COTTONWOOD, Ariz. — The Yavapai Apache and Hopi tribes continue to use Tavasci Marsh in Cottonwood, Arizona for harvesting.

Tavasci Marsh draws a lot of visitors because part of it is in Tuzigoot National Monument and the other part rests in Dead Horse Ranch State Park, both located in Cottonwood.

Beaver are prominent in the marsh and along the nearby Verde River — literally a couple minutes walk from the trailhead parking lot at Tavasci Marsh on the Dead Horse State Park side.

Guebard said birders flock to Tavasci Marsh as it has been established as an Important Birding Area (IBA) by the National Audubon Society.

Cattails and other wetland vegetation provide nests and habitat for hundreds of bird species including red-winged blackbirds and Bell’s Vireo. Hundreds of ducks visit Tavasci Marsh each winter.

Indeed, bald eagles were sighted last week, Great Blue Herons are common and Great-Horned Owls are often seen. One tree in Dead Horse State Park warns visitors that Black Hawks have a nest in the area and many hawks can be seen at the marsh along with woodpeckers.

White-tailed deer, javelina, mountain lions, coyotes, bats and otters are among the creatures found at Tavasci.

Tavasci Marsh is among the 5 percent of Arizona’s watercourses that remain in a natural state. Tavasci Marsh, at 96-acres, is the largest freshwater marsh in Northern Arizona not associated with the Colorado River.

The Lowland Leopard frog and the Woodhouse Toad as well as turtles make the marsh their home. Crayfish keep most fish out of the marsh, but the nearby Verde River and lagoons at Dead Horse State Park attract the fishermen.

The Tavasci Marsh Habitat Restoration Project represents a continuing effort to secure and improve the wetland. The project is funded by several state and federal agencies including Arizona Game and Fish and the National Park Service, along with the Freemont-McMoran corporation.

This area was known for mining and a study by the U.S. Geological Survey and the National Park Service indicated contaminants of copper, arsenic and barium in soil cores.

According to Arizona Heritage Waters, Tavasci Marsh is fed by Shea Spring. The spring comes from a sand boil, which occurs when spring water discharges into the base of a pool under enough pressure to cause the sand grains to boil. The boil comes from pressure rather than heat.

The hike to Tavasci Marsh from Dead Horse State Park is about two miles roundtrip ending at a a small wooden observation deck.

The family for which the marsh is named at one point drained it, but beaver — with the help of man — brought it back.

The marsh and park are abundant with trees with huge Cottonwoods as the most prevalent. Some of the Cottonwoods tower above everything else and get leaves with fall colors before any other trees in the area.

Historians believe natural activities of the beaver have helped restore the marsh, which in turn helped support the ancient Pueblo people, which is now protected at Tuzigoot National Monument. This is adjacent to the marsh and can be seen on a hill from the marsh.

But that’s not the only scenery from the marsh. When looking up from the marsh, hikers can see the Mingus Mountain range and the town of Jerome.

The trail drops about 50 feet at the start, but after that is fairly flat.

Dead Horse State Park offers many other amenities including several fishing lagoons. Those wanting to fish or canoe will also find a six mile stretch of the Verde River that is considered the Verde River Greenway State Natural Area because of its Cottonwood and Willow riparian gallery forest.

There are several restrooms at the park, ramadas, trash cans, camping sites and camping cabins. Equestrians and mountain bikers also use the park. Park admission is $7 per vehicle. There is also a gift shop at the visitor center.

The trail from Tuzigoot is wheelchair accessible. There is not much elevation change on this walk, as it goes from 3,378 to 3,399 feet. Pets are permitted, but need to be leashed.

There are no facilities, so bring water.

Visitors can enter though Dead Horse State Park ($7 per vehicle) or Tuzigoot National Monument ($10 per vehicle). More information is available at (928) 634-5283.

From Flagstaff take I-17 to Camp Verde Exit 287 and take Highway 260 to Cottonwood, then turn left onto Main Street. Take 89A toward Clarkdale, then right onto Tenth Street, passing over a small bridge to the park entrance. Then take the second left onto Flycatcher Road. Take the road to the end.

Out & About: Tavasci Marsh
Out & About: Lime Kiln Trail
Parsons Spring Trail offers swimming holes and cool shade
From A to Z in Arizona<br>
Riordan Mansion, Homolovi Ruins among parks to close