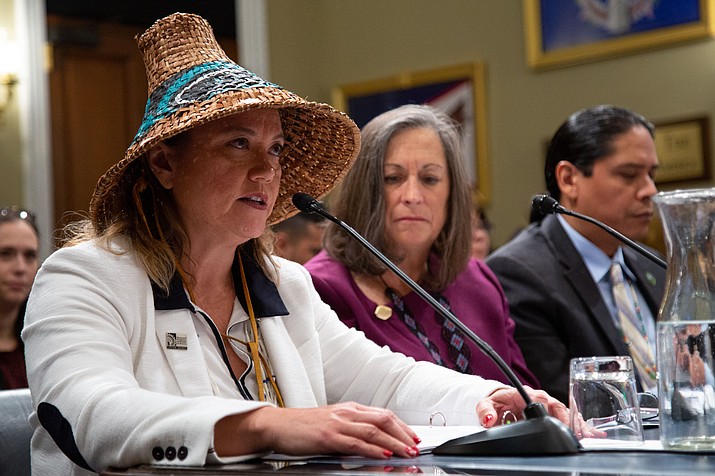 National Congress of American Indians President Fawn Sharp said the U.S. “has some serious and significant homework to do,” before it can work with tribal governments to fix persistent problems. (Photo by Harrison Mantas/Cronkite News)

WASHINGTON — Tribal leaders went before Congress Nov. 19 to demand the government address longstanding problems in Indian Country — and not for the first time.

They were among the witnesses at a House hearing on “Broken Promises,” a U.S. Commission on Civil Rights report detailing decades of underfunding, poor data collection and lack of coordination that have hamstrung federal programs intended to help Native Americans.

Civil Rights Commission Vice Chair Patricia Timmons-Goodson said little has changed since 2003, when the commission first looked at the problem of funding for tribal programs.

“These past 15 years have resulted in only minor improvements, at best, for Native Americans as a group,” she said in her prepared testimony. “In some areas, such as housing, conditions have actually worsened in that time span.”

Fawn Sharp, president of the National Congress of American Indians, said the report reiterates a lot of what Native communities already know – that the federal government hasn’t lived up to agreements made with tribes. That has led to dire consequences for Indian Country and hampered tribes’ ability to help themselves, she said.

“We have a vision for how we go … to a path of prosperity,” Sharp told the House Natural Resources subcommittee Tuesday. “But in that path there are multiple … barriers that are (government) policy.”

Advocates at the hearing said they were glad to see that the commission’s report backed up what they have always known. But Francys Crevier of the National Council of Urban Indian Health warned that without follow up, “a report is just a report.”

The committee also heard from two officials with the Bureau of Indian Affairs and the Indian Health Service, two agencies heavily criticized in the report. Jason Freihage of the BIA acknowledged problems, but said his agency is working to overcome persistent funding challenges cited in the report.

“We do the best to target our resources to address staffing needs,” Freihage told the committee.

That did little to persuade Rep. Ruben Gallego, D-Phoenix, who pressed Freihage on why the administration’s budget called for deep cuts to Indian Country programs, despite the Bureau of Indian Education having only half its positions filled, and only funding 3% of tribal courts as of 2017, according to the GAO.

Anna Maria Ortiz of the Government Accountability Office testified that her agency found weaknesses in both funding and management of federal programs intended to benefit Native Americans. (Photos by Harrison Mantas/Cronkite News)

“We work within the budget process to demonstrate how we can allocate funds as well as possible,” Freihage said, adding that “within the president’s budget process, we aim for the best number that we can.”

Both Timmons-Goodson and Anna Maria Ortiz from the Government Accountability Office pointed to deficiencies in federal funding, staffing and data collection by agencies. Rep. Deb Haaland, D-N.M., who sits on the committee, has previously pointed to insufficient data as a barrier to combating the missing and murdered indigenous women crisis.

“One of the things that (Phoenix) facility had to do to make up for the loss of funding is take out a personal loan,” she said. Such shaky funding limits the services those facilities can provide, she said.

Advocates at the hearing made a number of policy recommendations including “advanced appropriations” that would shield Indian Country programs from government shutdowns and other funding uncertainties.

Sharp, the GAO and the commission report all said uncertain funding prevents agencies like the BIA and IHS from investing in long-term solutions to persistent problems plaguing Indian Country programs.

Sharp said there needs to be a government-to-government dialogue between U.S. and tribal officials, but that the federal government first needs to understand what it owes tribes through treaties and other agreements.

“The United States has some serious and significant homework to do,” Sharp said, noting that federal agency staffers often display a lack of understanding of the relationship between the government and tribes.

“We have to go argue with Energy and Commerce (committees). They’re a little slower than we are, but we’ll get there,” Grijalva said.

“We advocate for achieving political equality with the United States,” she told the committee, giving tribes greater say over their lands and people. “Until we address that foundational issue, we’re going to continue to see these symptoms of a bigger problem.”