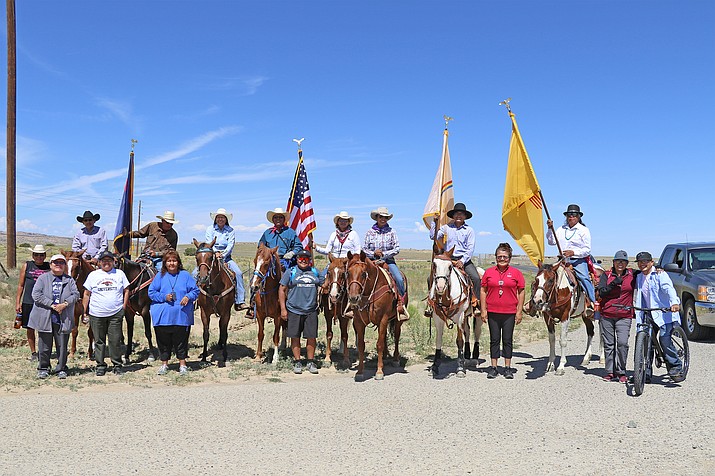 “We are very thankful for everyone who participated in this event, especially to the families and community members who welcomed us to their residence,” said Benallie, who rode the entirety of the event on horseback from July 29 to Aug. 6. “This was a great experience for everyone involved and we hope to gain more participation in the years to come. I’m thankful for the support and welcome we received throughout the trail ride.”

The trail ride was supported by community members at designated locations along the route offering their residence for overnight rest. The first stop for the riders was July 30 at the Silversmith residence in Nazlini, Arizona followed by Ann Tsosie’s residence near the Lowes Grocery store in Burnside, Arizona.

The following day, they stayed the evening at the home of Ron Begay and family. On Aug. 1, the riders were hosted by the Navajo Nation Department of Agriculture on behalf of Leo Watchman Jr. and on Aug. 2 they arrived at the Smooth Rock Arena at Martinez Bahe’s homestead in Yatahey, New Mexico.

Dr. Germaine Daye welcomed the riders in Brimhall, New Mexico Aug. 3 the riders spent the following evening at the Dale residence in Coyote Canyon before staying at the Perry residence near Nahodishgish, NM on the final night.

The trail riders joining Benallie throughout the duration or the ride included Vida Benally, Eddy Draper, and Elroy Dale. Other riders who joined along the route included 2017 Navajo Nation Vice Presidential candidate Buu Nygren and NTU staff members Jones Lee and Duwayne Thomas. On August 6th, the trail riders arrived to a welcoming crowd at the Main campus with community members, NTU staff, and students joining as they walked in from the Crownpoint fair and rodeo grounds.

Four fun runs were held in conjunction with the ride in Chinle, Ganado, Window Rock and Crownpoint. Over 300 individuals participated in the series, which was held in celebration of NTU’s 40th anniversary after first opening as the Navajo Skills Center in 1979. The university has since developed into a university and has expanded its reach with instructional sites in Chinle and Teec Nos Pos, Ariz. and in Kirtland and Zuni, NM.

More information about the NTU trial ride for higher education or about NTU’s Chinle instructional site, is available by contacing Chinle Instructional Site Director Arlena “Bo” Benallie at (928) 674-5764 or abenallie@navajotech.edu.