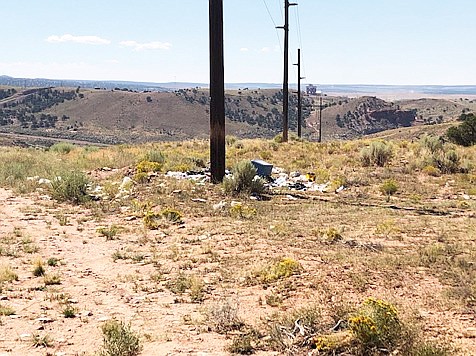 The Navajo Nation is working on a plan to establish a landfill for solid waste in order to promote illegal dumping on the reservation. (Photo/Office of the President and Vice President)

BLACK MESA, Ariz. — On Aug. 23, the Navajo Nation Environmental Protection Agency announced that its Criminal Enforcement Department is working to address a case of illegal trash dumping in the community of Black Mesa, Arizona, which is in violation of the Navajo Nation Solid Waste Act, and will seek prosecution of the perpetrators.

Navajo Nation EPA Executive Director Oliver Whaley stated that a report of illegal dumping was recently made to the EPA’s Western Navajo Agency office by local residents, which was then investigated. The Navajo Nation EPA has since cleaned up the illegal dumping site, which consisted of household debris and garbage. While cleaning up the site, the officials were able to identify several alleged perpetrators using names found on the debris.

Navajo Nation President Jonathan Nez and Vice President Myron Lizer commended the Navajo Nation EPA for addressing the situation and community members for raising the concern with the EPA. They also cautioned that other similar offenses will be investigated to deter illegal trash dumping and to protect the environment.

“We’ve heard directly from many of our own people regarding their concerns over illegal dumping in many communities and many have called for the prosecution of offenders. In every community, we have children that play outdoors and families that use our land for events, ceremonies, and many other purposes — it’s important that we protect our lands and preserve them for these important uses,” Nez said. “This is a community driven effort to keep our lands clean and safe.”

Lizer said he is hopeful that the situation in Black Mesa will serve as a reminder to perpetrators that the Nation will pursue prosecution for illegal trash dumping.

Navajo leaders are working to establish a landfill to properly dispose of solid waste and to promote recycling in communities on the Nation.

“While we are still addressing the issuing of providing more convenient places for people to legally dump their trash, we as a Nation, can no longer be afraid to turn a blind eye to illegal dumping,” stated Oliver Whaley, Navajo Nation Environmental Protection Agency Executive Director.

Among other provisions, the Navajo Nation Solid Waste Act prohibits the disposal of “any solid waste in a manner that will harm the environment, endanger the public health, safety and welfare or create a public nuisance.

The public is encouraged to report illegal trash dumping by calling the Navajo Nation Environmental Protection Agency at (928) 871-7692.