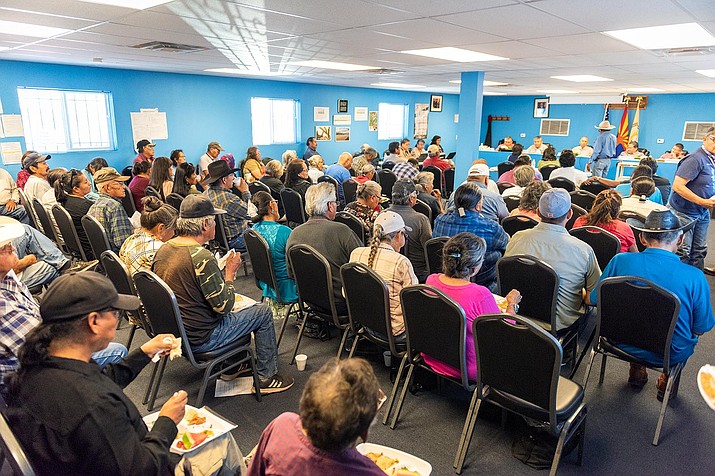 Members of the Resources and Development Committee (RDC) heard from the Cameron Agricultural Ad Hoc Committee on the efforts of the local community to establish farming operations along the Little Colorado River. The ad hoc committee shared previously they worked to secure Síhasin Fund support for developing project infrastructure.

“If you drill 50 feet down, water is flowing,” said Byron Haskaan, an ad hoc committee member.

RDC voted to accept the report and added that it will schedule a work session with the ad hoc committee and relevant Navajo Nation entities to get the project going.

Navajo Division of Transportation, Dibble Engineering, Navajo Parks and Recreation and the Cameron Chapter hosted a ribbon cutting ceremony for a safety improvement project that was completed at the Little Colorado River Tribal Park Aug. 19. (Photo/NDOT)

Cameron vendors reported next regarding ongoing issues many local vendors are experiencing with the Navajo Parks and Recreation Department.

The department manages the Little Colorado River Tribal Park located in the Cameron Chapter. The group is comprised of local vendors that produce jewelry, concession items and more that are typically sold alongside points-of-interest that are popular with tourists.

Vendors told RDC that Parks and Recreation staff demonstrate a lack of customer service and professionalism. They reported that department director Martin Begaye has refused to respond to vendor questions through email or phone. Additionally, the report included details regarding the ‘fee’ signage the department posted that deters tourist traffic at their roadside locations and the inconsistent business hours park staff impose upon vendors

“Here in Cameron, the ones that are benefitting off this tourist traffic is Conoco, Chevron, the trading post, Burger King. Our vendors can’t even sell on the weekends and it’s the Navajo Nation Parks and Rec. Department that make those decisions. It hurts our vendors greatly,” said Cameron community member Alecia Chee.

Council Delegate for Cameron Chapter Thomas Walker, Jr. stated, “Vendors were there long before Parks and Recreation were given management authority of the area.” He went on to acknowledge that upgrades to roadside vending areas will need to be carried out and that it can cause vendors to be impacted.

After more than 10 vendors addressed the committee, RDC voted to accept the report and to schedule a leadership meeting with the Division of Natural Resources, Parks and Recreation Director Martin Begaye and the Navajo Nation Division of Transportation.

“1,300 surveys came in. Each one of them counted the number of foals, yearlings, and adult horses that could be spotted. Based on the results, there was approximately 7,000 horses that were counted,” reported Notah.

Notah said that the survey results will be shared with the Navajo Nation Fish and Wildlife Department for modeling the size of the horse population and the growth rate. The Department of Agriculture will then use those calculations to set targets for managing the feral horse population more efficiently, said Notah.

Regarding the Big Boquillas Navajo tribal ranch, Notah reported that the ranch is located west of Flagstaff on U.S. Forest Service land. Due to this, Notah stated, the cattle operation is currently subject to grazing limits.

“Big Boquillas pays us about $540,000 a year. The other $155,000 or so comes from the New Mexico and other ranches. Big Bo subsidizes all the New Mexico ranches and helps us to pay taxes and to run the program,” said Notah.

RDC accepted both reports from the Department of Agriculture and then allowed Director Silversmith of the Navajo Nation Division of Transportation to report on the Little Colorado River Tribal Park improvement project.

Director Silversmith reported the improvement project created turning lanes and a paved parking lot for a lookout point alongside the highway north of Cameron towards the Grand Canyon. Phase 1 of the project will be completed within 30 days after final paint striping occurs, and Phase 2 can begin with the construction of modernized vending booths, Director Silversmith shared.

Members of RDC went on to commend the work Director Silversmith and NDOT carried out to complete the improvement project.

“Who we needed to hear from was Parks and Rec.,” said Delegate Mark Freeland.

Director Silversmith was scheduled to give the report alongside Parks and Recreation Department Director Martin Begaye. The two departments held a ribbon cutting ceremony earlier Monday at the project site north of the Cameron Chapter House. Begaye failed to show up at the Cameron Chapter for the Resources and Development Committee Special Meeting to provide his report.

Plan unclear by Navajo Parks and Rec. for monies generated by tourism
Council member: 'We have failed our horses and we cannot neglect them any longer'
Navajo grazing committee asks Resource and Development Committee for more funding, re-issuance of grazing permits
Navajo Nation to remove feral livestock to address overpopulation
Grazing fees set to increase $2 by 2020 for Navajo ranchers
Event Calendar