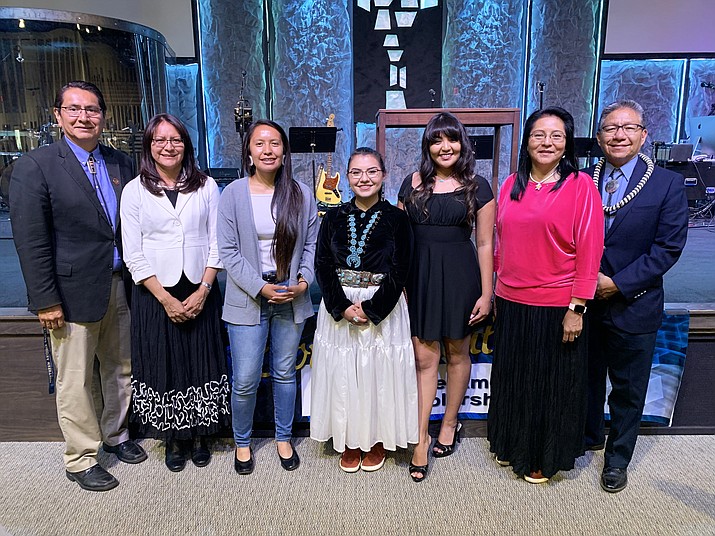 The scholarship is awarded to students pursuing a four-year degree in the areas of Science, Technology, Engineering or Mathematics.

Souder, Miller & Associates, (SMA) is an engineering, environmental and surveying firm working in the fields of water services, civil engineering, transportation, survey and mapping and environmental projects. The company also employs several members of the Navajo Nation at one of its office locations in Window Rock, Arizona.

President Jonathan Nez and Vice President Myron Lizer spoke at the reception to congratulate and encourage this year’s three scholarship recipients and their families who were also in attendance.

Nez encouraged students to return home to the Nation after earning their degrees to take on the challenge of public service by becoming involved in their local government and rising to the problem of serving their people as an elected leader.

“We appreciate your hard work and determination, and we also thank the parents for supporting your children and guiding them to this point,” Nez said.

Lizer reflected on the challenges he and Second Lady Dottie Lizer faced as they continued their educational goals while also raising their children and working to create a better life for their family.

“It’s very challenging. Life has its challenges, but through prayer and hard work, you can accomplish anything. I commend each of you for your achievements. Keep working hard and keep praying as you move forward,” Lizer said.

Council Delegates Daniel E. Henio and Eugenia Charles Newton were also in attendance to share their support and to encourage the students and their families.

Through the scholarship program, eligible Native American students are offered a $1,500 renewable scholarship. Over the years, the SMA STEM Scholarship program has provided over $180,000 to 43 undergraduate students. The award may be used for tuition, fees, books and/or on-campus housing and meals.

Recipient awards are renewed annually for up to a maximum of four academic years provided the conditions of the scholarship renewal are met, as determined by the SMA Scholarship Committee.