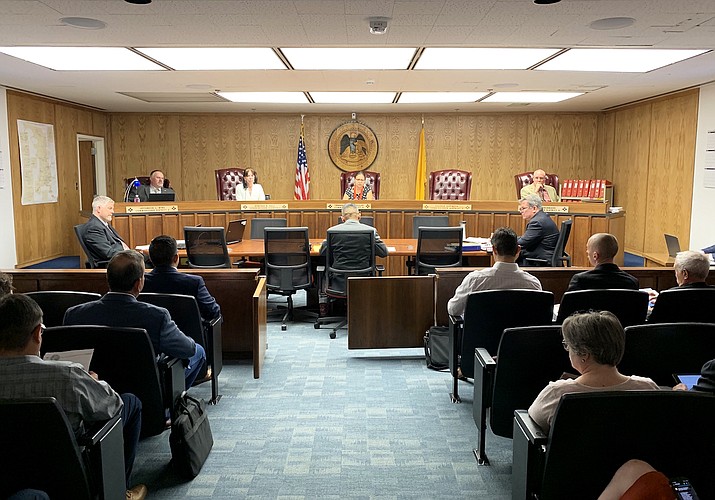 SANTA FE, N.M. — Navajo Nation President Jonathan Nez, Vice President Myron Lizer and Chairman of the Resources and Development Committee Rickie Nez appeared before the New Mexico Public Regulation Commission in Santa Fe, N.M. Aug. 13, to speak in support of Navajo mine workers, who will be impacted by the closure of the San Juan Generating Station.

In March, the Energy Transition Act was passed by the New Mexico State Legislature and signed into law by New Mexico Gov. Michelle Lujan Grisham, which established new renewable energy standards for the entire state.

This measure also provided funding and benefits for employees impacted by the closure of the San Juan Generating Station; however, a majority of the New Mexico Public Regulation Commission members took a position that the funds and benefits under the Energy Transition Act do not apply to workers at the San Juan Generating Station where members of the Navajo Nation comprise over 60-percent of the workforce for the plant, mine, contractors, and vendors.

“I felt compelled to appear and address this Commission, so that you could understand that deferring a decision leaves these workers and their families and loved ones in a vulnerable position. This is especially true for the mine workers who will need those severance funds by next summer,” Nez said.

In his remarks to the commission, Chairman Rickie Nez said the New Mexico Public Regulation Commission has the ability to end the confusion by following their oath of office and confirming that the Energy Transition Act applies to all aspects of the abandonment filings. Chairman Nez represents four Navajo chapters that are directly impacted by the closure.

“The Energy Transition Act, which was passed by the State Legislature and signed into law, contains $12 million for affected workers, which not only financially aids plant and mine workers, but contractors and vendors as well. In addition to that aid, another $1.8 million to the New Mexico Indian Affairs and $6 million for economic development in the affected communities. All of this goes away if you refuse to apply the Energy Transition Act,” Vice President Lized stated.

On Aug. 8, Nez and Lizer issued a letter to the New Mexico Public Regulation Commission members in which it states, “We support the Energy Transition Act because it represents the best way forward for not only the Navajo Nation and Navajo employees affected by the closure of the San Juan Generating Station, but it also supports our neighbors, our environment, and perhaps most importantly, the next generation of New Mexicans and Navajo people.”