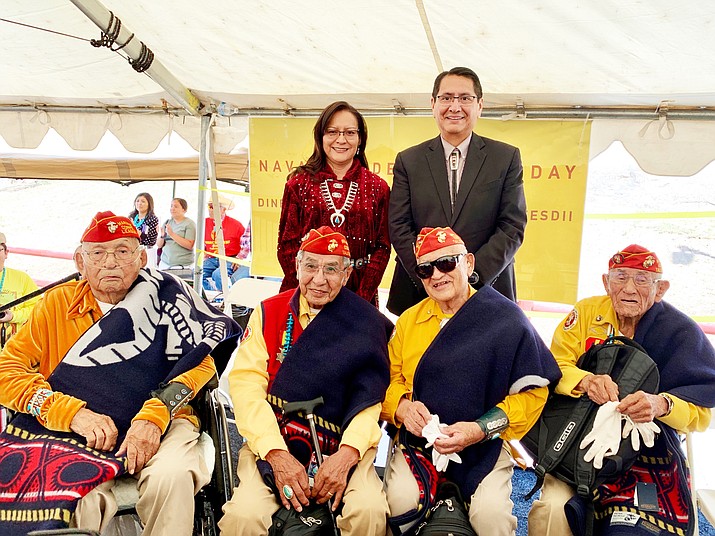 During his keynote address, Nez delivered a heartfelt message of appreciation to the Navajo Code Talkers, as well as their families, several of which were honored guests at the event.

“Today is a remarkable day for the Navajo Nation as we recognize and honor our great, selfless, and brave Navajo warriors and their families and communities. Many of our Code Talkers have gone on, but we are blessed to have several with us today. Our Navajo Code Talkers deserve a salute for their bravery and courage to defend and protect our country using our sacred Diné language,” Nez said.

Five surviving Navajo Code Talkers including Thomas H. Begay, John Kinsel, Peter MacDonald, and Joe Vandever were present at the event and each was provided the opportunity to address the audience and share their personal experiences and recollections. Navajo Code Talker Samuel Sandoval was unable to attend.

In 1942, the Navajo Nation answered the call of the United States of America during World War II and sent brave men and boys, known at the Navajo Code Talkers, to defend the Navajo people, Navajo Nation, and the country. The young Navajo Marines helped to devise an impenetrable code based on Diné Bizaad, the Navajo language, that is widely acknowledged as the deciding factor in the Pacific Theatre of the war effort.

“We ask our people to take time during the week to remember those who have passed on and their families who continue to honor them. Most of us will never experience what the Navajo Code Talkers and their families went through, but we can thank them by honoring their service and our sacred Navajo language,” added Vice President Lizer.

The event included a parade, Post of Colors by the Ira H. Hayes Legion Post 84, 21-gun salute by the U.S. Marine Corps, laying of a wreath at the Veterans Memorial Park, and an address by U.S. Sen. Martha McSally (R-AZ). Many of the families of the late Navajo Code Talkers were also present, and shared photos and stories of their loved ones with the public.