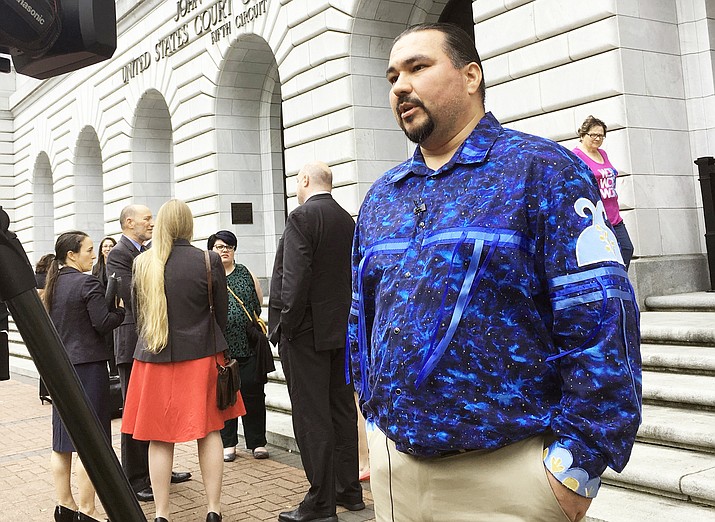 Tehassi Hill, tribal chairman of the Oneida Nation, stands outside a federal appeals court in New Orleans in March, following arguments on the constitutionality of a 1978 law giving Native American families preference in adoption of Native American children. On Aug. 9, the 5th U.S. Circuit Court of Appeals in New Orleans upheld the constitutionality of the law. (AP Photo/Kevin McGill, File)

The decision from a three-judge panel the 5th U.S. Circuit Court of Appeal in New Orleans upholds the Indian Child Welfare Act in a lawsuit involving non-Indian families in multiple states who adopted or sought to adopt Native American children.

Opponents of the law called it an unconstitutional race-based intrusion on states' powers to govern adoptions. But the 5th Circuit majority disagreed, saying the law's definition of an "Indian child" is a political classification.

The opinion by Judge James L. Dennis said the U.S. Supreme Court has long recognized that Congress has broad power to regulate Native American tribes. And it said the act's definition of Indian child is broad.

"As Defendants explain, under some tribal membership laws, eligibility extends to children without Indian blood, such as the descendants of former slaves of tribes who became members after they were freed, or the descendants of adopted white persons," Dennis wrote. "Accordingly, a child may fall under ICWA's membership eligibility standard because his or her biological parent became a member of a tribe, despite not being racially Indian."

The decision was a victory for the U.S. Justice Department, which defended the law, and supporters who say the law is needed to protect and preserve Native American culture and families.

"We are pleased that the court followed decades of legal precedent in its ruling, preserving a law that protects Indian children and allows them to retain their identity by staying within their families and tribal communities," leaders of the Cherokee, the Morongo Band of Mission Indians, the Oneida Nation and the Quinault Nation said in a joint press release.

Tyson Johnston, vice president of the tribal council of the Quinault Indian Nation in Tahola, Washington, was one of numerous tribal representatives who attended arguments in New Orleans in March.

"This serves the best interest of our native children and families," Johnston said in a telephone interview.

The ruling's immediate effect on adoptive families was unclear. Matthew McGill, an attorney who represented four families was not immediately available for comment.

The lead plaintiffs in the lawsuit challenging the law are Chad and Jennifer Brackeen, a Texas couple who fostered a baby eligible for membership in both the Navajo and Cherokee tribes. The boy's parents voluntarily terminated their parental rights and the Brackeens petitioned to adopt him. After legal battles, they were able to keep him when a placement with a Navajo family fell through. They hope to adopt his younger half-sister, according to briefs.

McGill represents the Brackeens and a Minnesota couple, the Jason and Danielle Clifford, who were unable to adopt a child who lived with them after having been shuttled among foster homes. "The Cliffords' family was literally torn apart," he told the appeals court judges during arguments in March.

Dennis wrote for a panel that also included judges Jacques Wiener and Priscilla Owen. A footnote in the opinion said Owen dissented in part and would soon file a separate opinion.