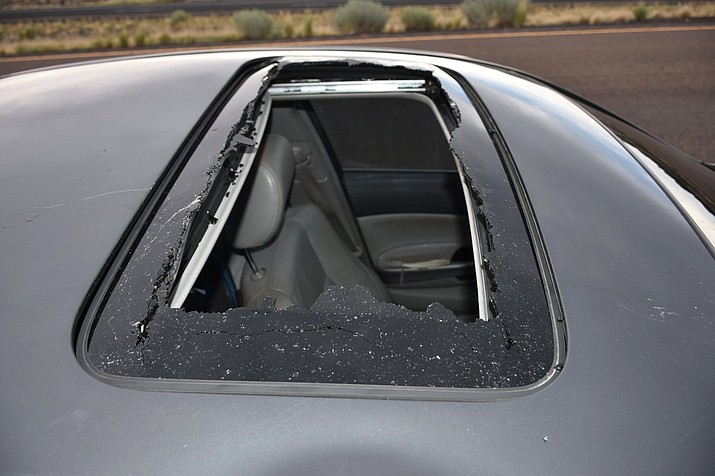 Detectives have identified the man that died on scene as 35-year-old Richard Osburn from Oklahoma. A preliminary autopsy finding by the Coconino County Medical Examiner’s Office suggests that Osburn died from blunt force trauma to the head, most likely sustained as he fell from the vehicle onto Highway 89N. There were no other significant injures found on Osburn.

The Department of Public Safety also conducted an investigation since the incident happened on a state highway. Information obtained through both investigations revealed Osburn and his wife were traveling southbound on Highway 89N. Osburn was driving their vehicle when the vehicle traveled into the northbound lane near the Sinagua Trading Post. Osburn eventually attempted to get back in the correct lane, travelling across the median of Highway 89N causing damage to the vehicle. Osburn stopped the vehicle and was approached by other motorists who were attempting to assist him.

Osburn exited his vehicle and began acting aggressive towards the other motorists. During this time, a couple from Conway, Arkansas stopped to assist. Osburn approached them, continuing his aggressive behavior. The Arkansas couple got back into their vehicle, with the female driving, and started to leave the scene. While pulling back onto the highway, they observed Osburn running at their vehicle and jumped onto the roof of the vehicle. The woman accelerated onto Highway 89N southbound. Osburn, while on top of the vehicle, produced a fixed blade knife and smashed the glass sunroof out of the victim’s vehicle. Osburn then pulled his upper torso into the passenger compartment of the victim’s vehicle and began grabbing at the female driver. During this time, Osburn attempted to stab the female driver with his knife. The male victim was attempting to defend himself and the female victim from the front passenger seat.

Eventually, the male victim was able to push Osburn back out of the sunroof. The female victim initiated an evasive maneuver with the vehicle which caused Osburn to fall from the roof of the vehicle at speeds estimated between 60-70 miles an hour. At this point, it appears as though Osburn died as a result of the injury sustained when he impacted the roadway.

Obsurn’s wife was interviewed at the Sheriff’s Office in Flagstaff and has been cooperative with the investigation. She was released to a friend and Victim Witness services.

The investigation is still ongoing by Detectives with the Coconino County Sheriff’s Office.

Gray Mountain, AZ – A couple from Arkansas was attacked when they stopped to help a stranded motorist on Highway 89 near Gray Mountain August 5.

Around 1:10 pm, Coconino County Sheriff’s Deputies and Arizona Department of Public Safety Troopers from Flagstaff responded to a call for a motor vehicle accident, stabbing and death.

Upon arrival, a deputy observed a male body in the middle of the south bound lane. The subject showed signs of multiple injuries and heavy bleeding, and had no vitals.

Witnesses advised that a vehicle just south of the location may have been involved and that there was a stabbing victim at that vehicle.

Upon further investigation, CCSO said the Arkansas couple was traveling southbound on Highway 89 when they stopped to assist a vehicle that had possibly been involved in an accident. When the couple approached the vehicle, a male suspect from that vehicle ran at them with one hand behind his back.

While the victims were trying to drive off and the two males were struggling, the vehicle swerved causing the suspect to fall off the top of the car into the roadway where he was located upon arrival of law enforcement.

Victim and witness accounts indicate the vehicle traveled approximately ¼ to ½ mile at estimated speeds of 60 to 70 miles per hour before the suspect came off the roof and onto the road way.