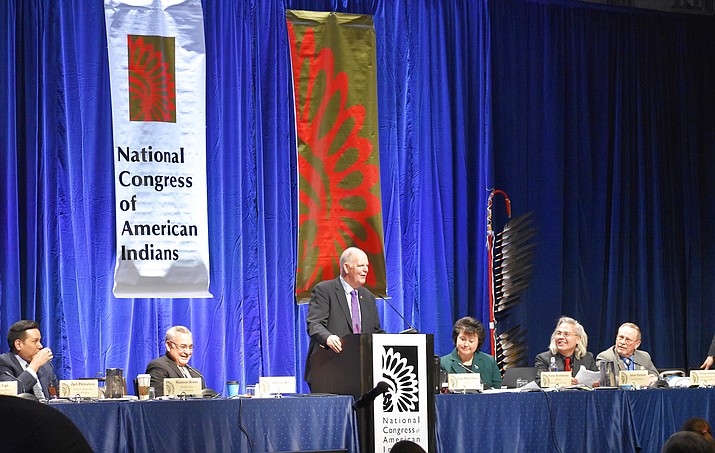 FLAGSTAFF, Ariz. — U.S. Rep. Tom O’Halleran is the main sponsor of a bill to repeal archaic laws toward Native Americans, and he is also working on bills to continue a moratorium on mining near the Grand Canyon, approve more funding for schools on the reservations and improve health care programs for Native Americans.

O’Halleran represents Arizona’s first Congressional District which includes the Navajo Nation, Hopi Reservation and Gila River Indian Community. About 25 percent of the district is Native American, meaning it has the most Native American voters of any congressional district in America.

In the House of Representatives, O’Halleran was joined by Rep. Dusty Johnson from Alabama and Tom Cole from Oklahoma in introducing the “Repealing Existing Substandard Provisions Encouraging Conciliation with Tribes (RESPECT) Act.

O’Halleran said this bipartisan legislation has a chance to be passed in the House, the Senate and signed into law by the president.

O’Halleran said he could not believe these outdated laws were still on the books.

“I put a lot of credence on respecting people and this is disrespectful,” he said about the outdated laws. Thus, it’s no coincidence that the acronym for the law is RESPECT. This just did not make sense and we need to look at it more.”

One of the laws, relates to Native American children still allowed to be taken from their homes to be put in boarding schools. That law was passed in the 1800s.

“In Navajo and Hopi, boarding schools and the way they were treated there is still in their minds,” O’ Halleran said. “They took them away and forced them to learn another culture. You want to keep them as a part of history of how not to treat people. This is still on the books and could be enforced at any time by an administration or the courts. This is so disrespectful to their needs and culture.”

O’Halleran said Native Americans want education, but they want their heritage included, as it is at many native schools today.

“The boarding schools were just the opposite,” he said.

Another outdated law that O’Halleran would like to repeal with this legislation states that if the federal government decides the tribe was hostile then it can take or withhold money from that tribe.

“They could take money away from women and children,” O’Halleran said. “There wasn’t much jurisdiction where tribes could go in those days if the government decided they were hostile.”

O”Halleran said there are some laws that have been around since 1910 that have not been enforced.

The bill will start in the House Judiciary Committee, then go to the House and then the Senate. The earliest the legislation could be considered is this fall.

O’Halleran is one of the sponsors of the Grand Canyon Centennial Protection Act, which would continue a moratorium on uranium mining near the Grand Canyon. O’Halleran said there are plenty of uranium mines on the Navajo Nation that still have a horrendous need to be cleaned up with most of these mines there since the 1940s. He recently wrote a letter to the EPA asking why the cleanup has taken so long, but he knows lack of funding remains a problem. He said the Havasupai do not know the impacts on their water from nearby uranium mines.

O’Halleran said 75-80 percent of people find mining uranium in or near the Grand Canyon is unacceptable.

The Grand Canyon Centennial Protection Act was recently approved by the House Natural Resources Committee. In the fall it will go to the House, where it is expected to pass. It will then go to the Senate where its chances are not assured.

O’Halleran said he supports mining, but the Grand Canyon and surrounding places are inappropriate for mining. He said mining has its place, but must be used in a productive way.

O’Halleran has pushed for a veterans’ home that is under construction in Flagstaff. The groundbreaking was about a year ago with the hope that construction will be completed in spring of 2020 for the 80 bed facility.

This will be the closest veterans’ home to the Navajo and Hopi reservations.

O’Halleran said he is appalled that a law remains in place that a veteran’s home cannot be built on reservations. He said this is particularly offensive when considering that Native Americans serve in the military in larger numbers than any other ethnicity.

“It makes no sense that they and their families have to be separated by hundreds of miles if they go to a veteran’s home,” O’Halleran said.

This home for veterans would be located near Flagstaff Medical Center.

O’Halleran said the budget recently passed by Congress has more funding for taking better care of veterans. However, Congress just began its recess and the final budget will not be finished until September, at the earliest.

O’Halleran added that the budget, which has more than $220 billion more than Trump’s proposed budget, was a bipartisan bill which came after long extensive negotiations between the Republican and Democratic parties in the House and the Senate.

O’Halleran said better funding for veterans and military is overdue since both have been cut for years.

“We need to try to keep our promises to veterans in an unstable world,” he said.

Another push by O’Halleran is for a bill that passed last year for funding the construction of seven schools on the Navajo Nation at a cost of $100 million.

“Some are being built right now,” he said.

O’Halleran is supporting a number of initiatives for education including improved housing for teachers, improved salaries for teachers and making sure that more teachers come from tribal lands.

“They will retain more teachers if the teachers come from the communities where they teach,” he said.

O’Halleran is also working on a number of health care bills for tribes, including reauthorizing more health care centers and addressing tribal diabetes, although, he added, diabetes care within all of America needs to be improved including the escalating costs of prescriptions drugs.

“This is so important for families so they have money for food, shelters and cars so they can get to work,” he said. “This would also mean more customers for the business community. This would also be good for government since there would be more money in the system.”

O’Halleran said too many Americans are not part of the boost in the economy.

“Everybody deserves to have a quality of life,” he said., O’Halleran fears that the Senate will never hear the minimum wage proposal since Senate Majority Leader Mitch McConnell has held up 110 bills from being heard.

O’Halleran said he is working on legislation that would provide economic development and job training relating to the closure of the Navajo Generating Station.