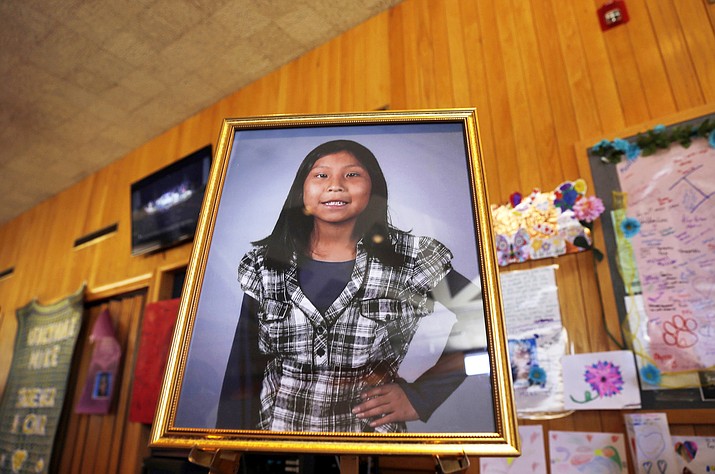 This May 6, 2016 photo shows a portrait of 11-year-old Ashlynne Mike on display inside the lobby of the Farmington Civic Center in Farmington, N.M. The mother of Ashlynne, a Navajo girl who was abducted and killed in 2016, is urging tribal officials to take advantage of tools and funding that have been made available for responding to reports of missing Native American children. Pamela Foster's comments July 30, came during a training in Albuquerque for tribes to implement the alert system. Organizers say more than 20 tribes are participating in the training. (Jon Austria/The Daily Times via AP, File)

ALBUQUERQUE, N.M. (AP) — The mother of a Navajo girl who was kidnapped and killed in 2016 urged tribal officials and children's advocates July 29 to take advantage of tools and funding under a law that expands access to the nation's Amber Alert system.

Pamela Foster spoke during a training at Isleta Pueblo, south of Albuquerque, for tribes seeking to implement the alert system. Despite a 2007 pilot project, it was not in place on the Navajo Nation when her daughter Ashlynne Mike was abducted near Shiprock, a town in northeast New Mexico. Her disappearance was a catalyst for the state to fully implement Amber Alerts.

Pamela Foster speaks to reporters July 30, at Isleta Pueblo, N.M., where a training session is being held for tribes to implement their own Amber Alert systems. Foster's daughter Ashlynne Mike was 11 when she was kidnapped and killed in May 2016 after school near her home on the Navajo Nation. An Amber Alert wasn't issued for her until early the next morning. (AP Photo/Mary Hudetz)

"I want you to know there was nothing worse than finding out there were no Amber Alert systems on the reservation at the time when we needed it most. No roadway digital signs, no text alerts," Foster said.

A federal law signed last year expanded the child abduction alert system to tribal land, giving tribes direct access to federal grants that law enforcement agencies use for Amber Alert systems. The law was named in memory of Ashlynne, whose memory has been evoked during Congressional hearings in Washington and marches in tribal communities that aim to shed light on the disappearances of Native American women and girls .

The 2018 law also makes permanent a pilot program that offers training to tribes. It's unclear how many of the more than 570 tribes in the U.S. participate in the Amber Alert system.

In 2007, the Navajo Nation was among 10 tribes that had participated in the pilot project through the U.S. Justice Department to expand Amber Alerts into Indian Country. But while other tribes, including the Pueblo of Laguna west of Albuquerque, found success in issuing alerts and establishing systems in coordination with state authorities, the Navajo Nation became what one expert called an "outlier."

Swaths of three different states — Utah, Arizona and New Mexico — are within the boundaries of the Navajo Nation, the largest reservation in the U.S., and that has complicated coordination efforts, said Jim Walters, who leads the federally funded training program.

In Ashlynne's case, family reported her and her brother missing to police in the early evening, and police learned before nightfall from her younger brother that a man in a red van had taken both of them into the desert. The boy had been able to run away and meet an elderly couple along the road who took him to police.

Shiprock police sent a basic description of the suspect and his vehicle to partnering agencies about an hour later, but it wasn't until 2 a.m. that an Amber Alert was issued, a delay that officials blame on getting information from the tribe to outside authorities who could issue an alert.

Ashlynne's mother recalled how she and her family had turned to agencies seeking help in their search.

Since 2016, New Mexico has become the first state in the county where all tribes have access to the Amber Alert plan, said Chyrl Jones of the federal Office of Juvenile Justice and Delinquency Prevention. The state has 23 total tribes and pueblos.

Nationwide, a 2018 survey included in a Justice Department report to Congress found that out of 100 tribes questioned, 76 participated in their state's Amber Alert plan, while 25 tribes reported having a system to disseminate information about abductions.

At the federally funded training held in New Mexico this week, representatives of more than 20 tribes are participating, organizers said.

"Although I'm proud to announce that tribes from 34 states are represented at this year's symposium, what we want is every tribe from every state to be a part of the Amber Alert network," Jones said.