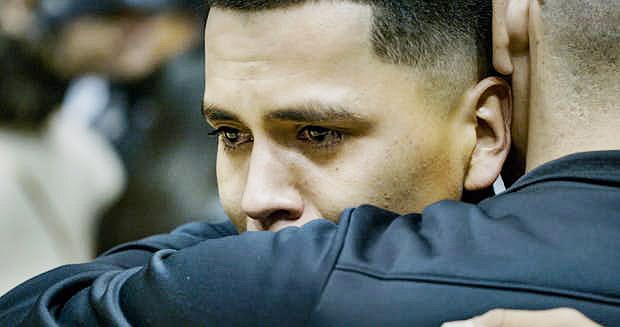 A new Netflix documentary follows the Chinle Wildcats from the Navajo reservation, showing the impact basketball has for Native communities and youth. (Photo courtesy of Indian Country Today)

CHINLE, Ariz. — “Ball is life” is heard anywhere you travel in Indian Country. On any given weekend, there is a basketball tournament happening from ages 5 to elders. The gyms are full of spectators, organizers, athletes, family members, and community members cheering, clapping, chanting sports mantras, and (my favorite) yelling at the referees with a “Rez” accent.

The world is about to see the chaos of the amazing talent Indian Country has to offer beyond a full gym of “rez ball” fans.

For six episodes, viewers will be able to see the journey of a Navajo Nation team on the way to the state tournament during the 2017 and 2018 academic year. Each episode is approximately 30 minutes long and all together equals a three and a half hour long movie.

Shaun Martin, Navajo and the athletic director of the Chinle Unified District, wants the world to gain two lessons from the series.

“I hope this documentary educates the world on what happened in Native America, number one. This next generation is dealing with trauma passed with Native history,” Martin said. “And number two, beyond educating the world on what has happened, I would love to see the exposure to lead to more opportunities for all our Native kids and Native communities.”

He thought “wow” when co-director Matt Howley wanted to follow the student-athletes on camera for a whole season.

Martin said the film crew became the second part of the team since day one.

Working to make this film as “authentic” as possible included a number of factors, said Howley.

First, he kept in mind the quote Martin shared with him, ‘These kids aren’t going to care about your project until they care about you.’

That changed the game.

“We put the camera down and spent a lot of time talking with the kids and mothers and fathers,” Howley said. They “put the cameras down, shut up, and heard some stories.”

Soon breakfasts with the families turned into invites to sheep butcherings and family gatherings at their homes.

When the basketball players got comfortable around the film crew, they started to be themselves. They weren’t reserved anymore.

“The proof is in the documentary because the kids really share who they are with Matt,” said Martin, who has already watched the series. “It’s mind-blowing what is shared in the documentary. It just makes it all the more strong, the message more strong and valuable with sharing who the kids are and community area and what we’re about.”

Quincy Natay, who is the school district’s superintendent, said despite challenges athletes face, viewers will also see the successes they achieve.

The philosophy of working hard toward goals are applied to both on the court and in the classroom, he said. “Success comes from that.”

Yes, the players and Navajo communities have obstacles, Martin said. But that’s not the focus.

“One of the big things that kept coming up in the documentary is not using the past or our history, that trauma as a crutch or excuse,” he said. “But using the innate resilience as an advantage to put their resume at the top of the pile. As a motivator to work extra hard to become successful in the modern world while holding onto the traditional past.”

In the new documentary, the world will witness the energy of the crowd and hear the tough stories of young Navajo student-athletes. (Photo courtesy of Indian Country Today)

Bringing on board two Navajo executive producers. Rickie Fowler and Notah Begay III are both Navajo and professional golfers who happen to know that hard work pays off.

Howley shared the basketball documentary idea with Fowler while they were working on another project together. Howley was inspired by a New York Times profile about Coach Raul Mendoza, who now just finished his fifth year coaching.

The co-director said Fowler fell in love with the idea of this documentary about the team.

“Let’s make this happen. What do we need to do?” Fowler asked.

Unlike many celebrities, they fund projects and people never see them again, said Howley. But Fowler wasn’t like that. He would check in on them and visited Chinle, which is in one of the episodes.

“He wanted to stay on top of this,” said Howley of the young golfer.

Fowler also recruited Begay, who was instrumental to the process.

Begay spent many summers in Window Rock and Ganado so he understood the experiences the student-athletes described on camera.

“Our goal was to adhere to as much as authentic storytelling as possible,” Begay said.

That’s where Fowler and Begay’s presence came in handy.

Begay said the documentary series was finished a year ago. They have been working with Netflix in the last year on edits from the film company’s suggestions for the series.

“The quality has to be so high because Netflix goes through a very, very strenuous process and evaluating in your show,” he said. There has to be a balance of authenticity and entertainment.

The film crew shared what they filmed with networks and hoped someone would be interested.

The streaming service saw it, wanted to see more, and told the crew to keep filming.

“We were midway through filming and we weren’t sure if anyone was going to buy it,” Howley said. “Executives saw what the stories could be and they wanted it on their platform.”

Everyone just wanted the story to get out there. It didn’t matter to who.

Now the world will see that Chinle High School can fill their Bobcat Den, or gym, with 5,000 people and Howley’s high school in Philadelphia can barely get 500.

It will also be added to the list of sports documentaries about Native people, such as Run Hopi, Off the Rez, Keepers of the Game and The Medicine Game.

In the middle of the Navajo Nation, the world will witness the energy of the crowd and hear the tough stories of young Navajo student-athletes.

“That’s what is the intriguing part of the series is that these are some real stories from the heart of the Navajo Nation,” Begay said.

“It’s a snapshot of what is going on in so many of our Native communities across Indian Country and it’s the realities our young people are facing,” he said.

However, the focus isn’t on the challenges. It’s on what sports can do for the youth and communities.

Each student is always celebrated in the community, said Martin.

“I think it’s a huge win for Indian Country in a sense that everybody is aware of the importance of sports in our communities, especially basketball,” Begay said. “But also were not a forgotten people. We’re still here and we’re still advocating for our future generations.”