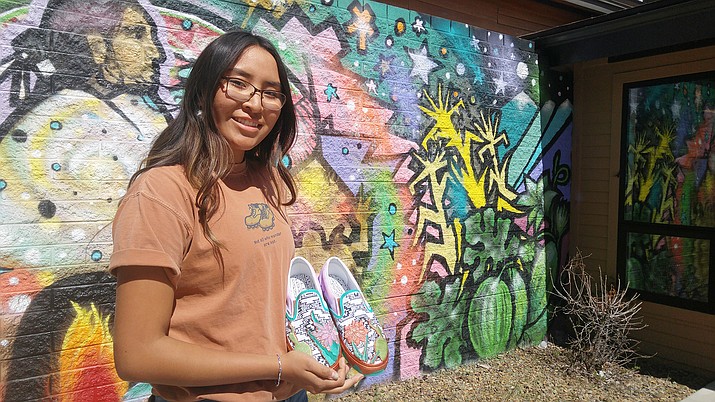 Navajo student Alyssa Williams holds her shoes in front of a mural in Flagstaff High School's courtyard April 26. She and Nicole Dougherty's shoes (below) are part of the Vans Custom Culture competition in which students from across the country design Vans shoes. (Kevin Moriarty/NHO)

FLAGSTAFF, Ariz. — Flagstaff High School is one of the 50 finalists for the Vans Custom Culture contest and Native student Alyssa Williams, along with Nicole Dougherty, is one of the school’s designers.

The grand prize winner of the contest gets $75,000 for their school’s art program. The public gets a chance to participate with open voting now through May 3. The public can vote once every day for their favorite high school shoes at: https://customculture.vans.com/login-voter/.

According to the contest website, Vans Custom Culture was created to inspire and empower high school students to embrace their creativity through art and design and to bring attention to diminishing arts education budgets.

Flagstaff High School is the only school in Arizona selected to compete for the top prize — this year is the first time Flagstaff was selected into the top 500 — in addition to being selected for the top 50 schools.

“We got rejected for the top 500 the last two times,” said Kayley Quick, the graphic design teacher at the school. “This time getting the top 500 acceptance was very elating in the first place. And then once we got it, we as a class hunkered down.”

Support has come from all over the Flagstaff community.

A Navajo student designs one of the shoes

After hearing about the contest, Williams said she instantly got an idea in her head for her design. Williams’ shoes reflect locality and Dougherty's shoes represent the off the wall category.

“I knew I wanted succulence, like plants from Arizona, something that had everything that Arizona offered,” Williams said. “I wanted to include my culture, the environment.”

Williams said she feels close to nature, which is also part of her culture, and she wanted her shoes to reflect that.

“My culture is very close to nature and I just love going outside and enjoying the environment,” Williams said. “I knew I wanted cactus because that is one of the things that people think about when they think of Arizona.”

In the last year, Williams’ direction has changed in school. She was studying marine biology, but this year, she has found that she really is enjoying graphic design.

“She (Kayley Quick, who is the graphic design teacher at Flagstaff High School) said I am really good at it,” Williams said. “I do like it and I think I will enjoy it in the future.”

Williams said, while she hadn’t taken a class in design before, she has always liked to draw and scribble and create her own art.

“My parents always wanted to encourage our creativeness and sports, too,” she said. “Recently, I’ve noticed that me and my older sister have the same things in common. She goes to school at ASU for interior design and I just thought the stuff she was doing that on was really cool.”

Her sister uses Photoshop and Illustrator to create — and Williams got to watch her.

“I was really interested in it and I got to see a little bit of what she was doing and I thought it was really cool and I thought I want to try that and I signed up for graphic design,” Williams said.

A contest was held in all of Quick’s classes where all the students submitted designs for the shoes before the final two were selected where 150 students participated.

Quick said she was proud of all her students who submitted designs but two did stand out.

“It was really Nicole and Alyssa who really had the concepts dialed in of local flavor and off the wall,” Quick said. “From there it was just creating the concept that they had from the beginning.”

Williams said that is where each student submitted drawings for their shoes of their ideas.

After Quick picked the two winning designs, then the students started design ing the actual shoes.

Williams said finding out she had one of the top designs has been crazy.

“I think it’s so cool,” she said. “I was so happy when I got picked because I really want this. I felt like it was something I could do. It gives me something to do artistically, besides doing sports.”

Williams said she is proud of being a Native student and she wants other Native students to know it is not impossible for everyone else to do this, too.

“This is something everyone can do,” Williams said. “I wanted to include my culture in it because I knew they could help out, support me and encourage me.”

While graphic design is normally digitally based, the competition allowed students to work on physical objects in the creation.

In addition to the cactus and plants on Williams’ shoes, she also included Navajo designs throughout the top part of the shoe and between the shoe and the sole, she painted Monument Valley in copper around the whole shoe.

“People have been coming up to me, teacher and students, saying these (the shoes) are a perfect representation of Arizona,”

There are also other details like aspen trees on the inside of the shoe.

“I got that from here,” Williams said. “I got my inspiration from Snowbowl. It is one of our sacred peaks.”

For her culture to be recognized nationally is a big deal, too.

“I’m really glad that everyone’s supporting it,” Williams said. “I know that it is not something that people are used to seeing on a shoe. And I want to make it more common instead of it being the only other Native American shoe.”

Williams said she knew she wanted to include the rich history of Arizona on the shoe and that included who she is and where she comes from.

“And that included the Navajos and the Navajo Nation,” Williams said. “I just wanted to put that on the shoe and because it’s a part of me. This is kinda like all of me on a shoe."