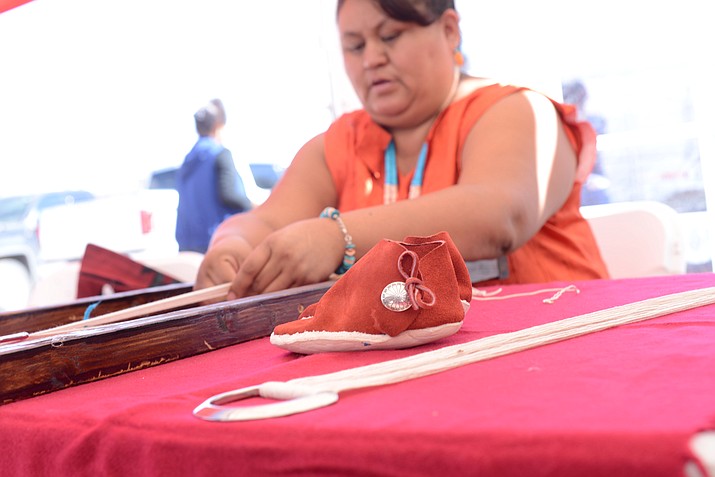 Diné Culture, Language, and Leadership graduate Kay Mariano works on a sash belt while displaying a moccasin she made. (Photo courtesy of NTU)

The event’s theme was “The Evolution of Diné Makers” and detailed how the art of making has evolved for the Diné people relating to the emergence story of their quest through the four worlds.

The free event included interactive workshops and competitions for attendees.

“We held a similar event at the previous 72nd Navajo Nation Fair, and received positive feedback when attendees were able to interact with our different programs and see first-hand the projects we’re working on at the university,” stated Daniel Vandever, communications director at NTU.

Other displays included: a healthy soil model created by NTU’s Land Grant program; a 3D printing demonstration by the Ke’yah Advanced Rural Manufacturing Alliance (KARMA) program; and a moccasin making display by Diné Culture, Language and Leadership graduate Kaye Mariano. The diverse forms of creating attracted a diverse interest from fair-goers, which according to Vandever, has been a part of a larger national phenomena known as the maker movement.

“The maker movement is being spearheaded by tech enthusiasts, crafters, hobbyists, engineers, and innovators. It’s a celebration of their creativity and has led to annual gatherings of creators locally, nationally, and internationally,” explained Vandever, who has been working with students who attended the National Maker Faire in New York last year to bring the event to fruition.

“Since the story of emergence, we’ve had been able to survive as Diné people because of our creativity and our ability to adapt and we want to celebrate that history,” Vandever said.

The Diné Maker Nation Fair’s layout was partitioned into four sections according to the four worlds the Diné people had to pass through in order to arrive to modern times. The first world, the black world, related to the basic forms of making that were used for purposes of survival. Diné College’s Navajo Cultural Arts Program hosted display booths on silversmithing and weaving, and Brent Toadlena and his company Shkii’Bida’ Moccasins and Art demonstrated how to make moccasins. NTU’s Navajo Club hosted a booth on language relating its use to the Navajo Code Talkers.

The blue world represents trade and engineering skills developed with the introduction to the wage economy on the Navajo Nation. This section featured booths involving the trade fields of welding, carpentry, and other forms of fabrication.

The yellow world featured forms of making centered on the revitalization of identity and culture, and showcased an eclectic set of booths ranging from an indigenous cooking demonstration by Diné College chef and NTU alumni Teri Ami to a green screen photo display by NTU’s New Media program. NTU’s university radio station 107.3 KCZY was on-site hosting a remote broadcast while displaying how radio shows were produced. Visitors were able to get on air and contribute to the live remote broadcast.

In addition to the open Faire, workshops took place throughout campus, including a composting workshop by NTU’s Land Grant program. NTU’s Culinary Arts program hosted an omelette making competition for attendees, and was awarded prizes for the top three competitors. Recruiters were on site for guided tours of campus.