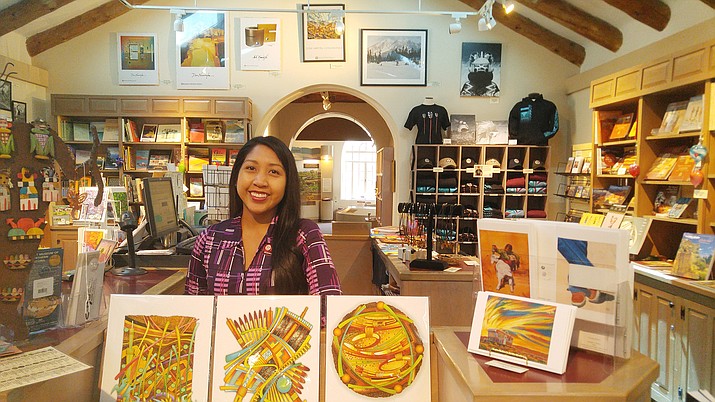 FLAGSTAFF, Ariz. — Samantha Burton, bookstore and publications manager at the Museum of Northern Arizona, is helping to lead the museum into the future as an indigenous voice who is responsible for lifting artists and indigenous literature into the future.

Burton, who is Hopi and Navajo, has worked at the museum since 2016.

Burton said the majority of her duties have to do with the bookstore — the everyday management of inventory and all associated paperwork, making and establishing relationships with vendors (artists), buying product and the day to day sales with the general public.

Choosing literature for the bookstore

Burton said finding what to display in the bookstore is the fun part of her job.

“It involves a very long curating process,” she said. “I take it really personally.”

“I really make a concerted effort to pick books … that are appropriate for our region, appropriate to sell at our institution and it’s a really long, ongoing process,” she said. “When I got here, there were some books that were problematic…and there still are… I’ll admit that. But it’s progress that we’re making.”

Burton said that is one of the nice things about being in her position — she gets to receive insight from onsite researchers, other staff members and the wider public in general.

“Because as our culture changes, so are the things that we are finding are appropriate and inappropriate,” Burton said. “Just being able to keep up with that, I think, is really important.”

The most problematic issues are found in literature, Burton said. Everything from methods, viewpoints, perspectives and a lot of cultural knowledge that wasn’t meant to be shared with the greater public, especially as those things relate to cultural groups the museum represents. 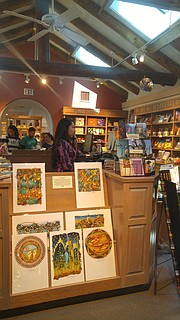 Burton said it is important to have someone in her position who is aware of those issues, sensitive to making those decisions and who is able to communicate that to the people who visit the museum, who are viewing and reading those books and to the people of the cultural groups themselves.

“If we have kids who are coming in who are from a certain culture who probably shouldn’t be exposed to different things, I try to be aware of that and I try to make sure that we’re at a place where people can find appropriate material but where they can also feel comfortable and supported,” Burton said.

Burton said people get a lot of information from the actual exhibits and then they come into the bookstore and find something that they can take home with them.

“I think it’s nice because they can start to do their own research and empower themselves to make their own decisions and form their own opinions,” Burton said. “If we can equip them with materials that are a good starting point, I think that’s really amazing.”

Burton is currently studying to be a librarian and she is almost finished with her master’s degree. She said she is always learning, keeping up with new things that are coming out and learning how to save information and make it accessible to people. That is what she does at the museum, too.

“As more indigenous people are going into position, of power in academia, we have the power and ability to influence what is getting out into the world, what we are sharing with other people — we have some say and I think that’s really a good thing and it’s empowering us to take control of how we’re represented in popular culture and in academic literature,” Burton said.

That goes as far as making sure, when people do come into the museum requesting a book that is not well respected or supported by people like the Hopi Cultural Preservation Office, that she can say why the book is not at the museum.

“I think it’s important that we can at least address that ‘Oh, we actually don’t carry that book here. Here’s some of the criticism, but if you would like to read it yourself, it’s widely available,’” Burton said. “And I think making that point, we’re not stating that we’re not going to carry books, we’re putting a preference on books that we think offer some insight and some knowledge that would benefit the reader. Promoting those is better than condemning all the others.”

Publications and working with artists

The museum has its own publications department, responsible for publishing the magazine “Plateau,” which is included at a certain level of membership.

While Burton said she’s not a content expert, she can offer advice from her own background, cultural and otherwise, on particular articles.

“It’s really nice because we have such a large focus on people of the region, it’s really good that there’s someone who has a say in a management position who has that perspective in mind,” Burton said. “I think it’s a big privilege that I don’t necessarily take lightly.”

Part of Burton’s job is seeking out new artists and giving them a different avenue to showcase their work.

“We’re benefitting greatly from these artists,” she said. “It’s another thing I don’t take lightly and I really appreciate every single artist who I work with. I appreciate that people come in and consider us a place to sell their work or prints…I think having the ability to talk with them and get to know them and … share their stories, I think, is such a powerful thing.”

Burton emphasizes with her background in English and literature instead of art, she has to learn what the symbols on artwork mean or what the meaning is behind the artwork.

“It’s been a really fun process and invigorating to see, from my perspective, that we have so many young, Native artists who are really putting a lot of work and effort into not only knowing the art side of it, but also the business side of it and the cultural side,” Burton said. “Making an effort to learn who they are, where they come from and how they incorporate that into their art and how they communicate that to everybody who’s able to enjoy their art.”

Burton said she and shop manager Cindy De Angelis, who works with artists who create the higher end pieces like the kachina dolls, jewelry and rugs, work hard to establish relationships and bonds with the artists.

“[Those relationships] involve putting trust in each other, that they will bring you quality products and then you’re going to hopefully compensate them in a way that satisfies their needs and fairly,” Burton said. “And that’s something I really try to do. I think it makes a huge difference when we tell people that we buy directly from the artists. And that the money that they’re paying, we’re getting a piece of it, obviously… but the money we pay to the artist is going directly back into their needs.”

Burton said properly compensating artists is close to her heart because she has learned, since she started working at the museum, that being an artist is a really difficult thing.

“If you have at least some income that is coming in at least fairly regularly, it is way of ensuring that you can buy new supplies, that you can continue to make your art and share that with the world,” Burton said. “That is something that I really take a lot of joy in doing.”

Burton acknowledged sometimes that means the artwork or jewelry comes at a higher cost because Native inspired items can be really cheap.

“It’s a choice you make,” she said. “It’s a choice we all make as consumers. I don’t want to be someone who’s behind the curve on that. Especially here. There are so many things that the museum is at the forefront of and I feel like this is just another thing that we can take pride in saying, we’re continuing to make this effort.”

Museum of Northern Arizona at the forefront

Paying artists what they are worth is not the only way the Museum of Northern Arizona is at the forefront. Burton said the museum’s track record of working with indigenous peoples is something to take pride in too.

“It is nice that I, as an indigenous person coming in, have the ability to have some say and that I’m respected by my peers and that they take in my insight as a means of working together to improve what we’re all doing here, as far as collections go, as far as the exhibits that we have, especially with the recent exhibit that we had, Pivot,” Burton said. “That was widely successful and the people who came in could see that it was something different. It is totally a reflection of who we are as a community.”

A circle of family and friends

Burton said she credits her training and education from a cultural perspective as a resource for her job. She said the people who are willing to share things with her, the people who she can rely on and count on within her own family, and her own circle of advisors are important because there are publications out there that she shouldn’t be reading either.

“I think that’s been the nicest thing that I can say 100 percent that the work that I’m doing here is not just me,” Burton said. “I’m relying on family members, friends… to help us all feel like we have some say and that we are contributing to the greater conversation.”

Burton will speak at an event at Museum of Northern Arizona May 4 on writing and publishing on the Colorado Plateau from 2 p.m. to 4 p.m.